2012 Artist of the Year Charlee Brodsky puts on a special exhibit at the PCA featuring her West Highland White Terrier. 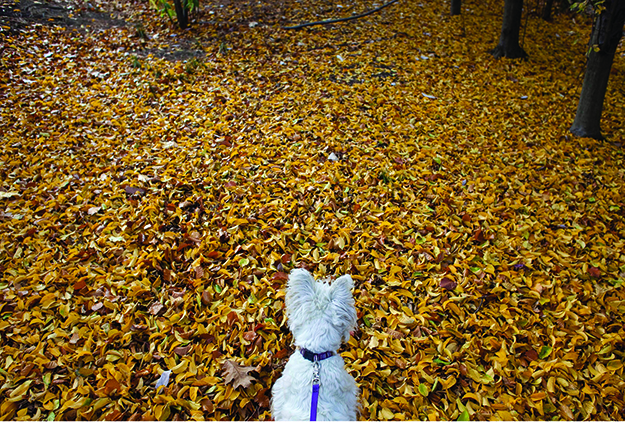 Photo courtesy of Pittsburgh Center for the Arts

DUAL SHOWS FOR THE DOG DAYS AT PITTSBURGH CENTER FOR THE ARTS
You could say that Charlee Brodsky has worked with dogged determination to create a show for the Pittsburgh Center for the Arts, which named her the 2012 Artist of the Year. This special exhibit features new works that (primarily) revolve around her West Highland White Terrier, Max, and her other Westie, Sam. What you’ll be seeing at her PCA exhibit is more than cute pet pictures, though it’s “a huge departure,” Brodsky promises, from her previous local and national endeavors.

Meanwhile, PCA Emerging Artist of the Year Vanessa German is a sculptor, poet, actress and designer who believes in “the seamlessness of creative process and purpose.” Sources of inspiration include African and African-American folk art, African tribal power figures, ritual ceremony and “the American story.” German explores “the intersections of art, art/work(s) and community through the lens of race, class and gender.” Read more about this dynamic dual exhibition here!

TAKE A FRESH LOOK AT THE CLASSICS
Once upon a time, people didn’t worry much about the picture quality of their favorite movies as long as the projectionist stayed awake or the VCR didn’t eat the cassette. Now, though, the intricacies of Blu-Ray players, HDMI cables and surround sound have trained us to be a bit more discerning. Fortunately, you don’t need to drop a few grand on state-of-the-art equipment to get a sharper look at a classic: You just need to buy a ticket. Read this week’s edition of After Dark to find out how to catch digitally restored presentations of Jaws, West Side Story, Chinatown and more on the big screen!

SUPER (FUNNY) TROOPERS AT PITTSBURGH IMPROV
They say laughing increases your lifespan — so head to Pittsburgh Improv this weekend and live longer for just $20. Funny guys Steve Lemme and Kevin Heffernan take the stage this Friday and Saturday night; long-time friends since college, Lemme and Heffernan co-wrote and starred in hits such as Super Troopers and Beerfest as members of the Broken Lizard comedy troupe. Nowadays, the dynamic duo is at work promoting The Babymakers, available now on iTunes and On-Demand. One thing’s for sure — if their stand-up routine is anything like their box-office hits, you’re sure to lengthen your life expectancy by a decade. Or two.

In Theaters: So, who are you going to the theater with this weekend? Kids? They’ll be looking for Paranorman. Your dad? Make a trip to the Harris to see Neil Young Journeys. Any group that you could address, collectively, as “dudes”? Try action extravaganza The Expendables 2. Someone who wore out a VHS of The Bodyguard back in the day? Whitney’s final role in Sparkle hits theaters this weekend. Every single member of your extended family? Behold the great summer compromise pick, The Odd Life of Timothy Green. PM Film Editor Sean Collier will appear on the 102.5 WDVE Morning Show Friday at 7:15 a.m. to review Sparkle and Timothy Green. One of those two films filled him with seething rage; find out which tomorrow morning at 102.5-FM or DVE.com!

On Saturday, the Pittsburgh Cultural Trust presents Jim Gaffagan: The American Tour at the Benedum. Gaffagan's clever, quiet style has made him one of the top five most successful touring comedians in the country. Click here for more.

Ever wonder what Great Aunt Ida's coin collection was worth? You are in luck! The Sen. John Heinz History Center’s fifth annual Pittsburgh’s Hidden Treasures, An Antiques Appraisal Show event is Sunday from 10 – 4. Visitors to the popular event are encouraged to bring their prized possessions to the History Center and meet with professional appraisers as KDKA-TV cameras roam the museum. Click here for more.

This article appears in the August 2012 issue of PMWeekend.
Categories: Things To Do