Who needs an interpreter when the locally designed Jibbigo app has you covered? 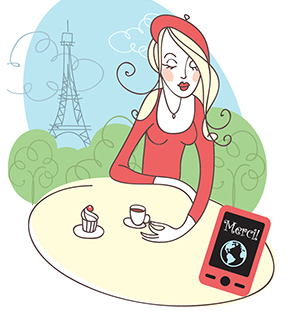 There you are in a Paris patisserie. You lift your iPhone to your lips and say, “I would like a baguette.” The French words appear on your screen, and soon you have your bread tout de suite.

For years, a universal translator was the stuff of science fiction. But thanks to Jibbigo, a new app for iPhone, iPad and Android by South Side-based startup Mobile Technologies, the future is here. The app translates your speech into a foreign language, right on your smartphone. So say bon voyage to phrase books, bogus crash-courses and unwieldy picture cards; now you can type or speak the desired phrase, and Jibbigo will interpret for you. When connected to the Web via 3G or Wi-Fi, the app and its translations are free; you can also download the offline version of a language, with no international roaming charges, for a mere $5.

Sure, you probably expect Jibbigo to service the usual French and Spanish — but it covers more than a dozen languages, from Thai to Tagalog. If you’re destined for Baghdad, you can even download the slightly more expensive English-to-Iraqi ($13.99; currently available for iPhone and iPad only). The app’s versatility has made it a sleeper sensation: Travel & Leisure called Jibbigo one of the “top travel apps.”

“This system demonstrates the cutting-edge of machine learning technology and a new frontier for multilingual communication,” says Dr. Alex Waibel, founder of Jibbigo and a Carnegie Mellon University professor.

Meanwhile, Mobile Technologies unveiled the first-ever “real-time lecture translation system” in June, which could be a major breakthrough for schools, conferences and — who knows? — the future of the U.N.

Granted, learning a language is still a beautiful, valuable skill — but until you get around to German 202, Jibbigo is here to helfen.

This article appears in the August 2012 issue of Pittsburgh Magazine.
Categories: Community Feature