The case against TouchTunes, the streaming music loudspeaker that can't stop screwing up the vibe at local bars. 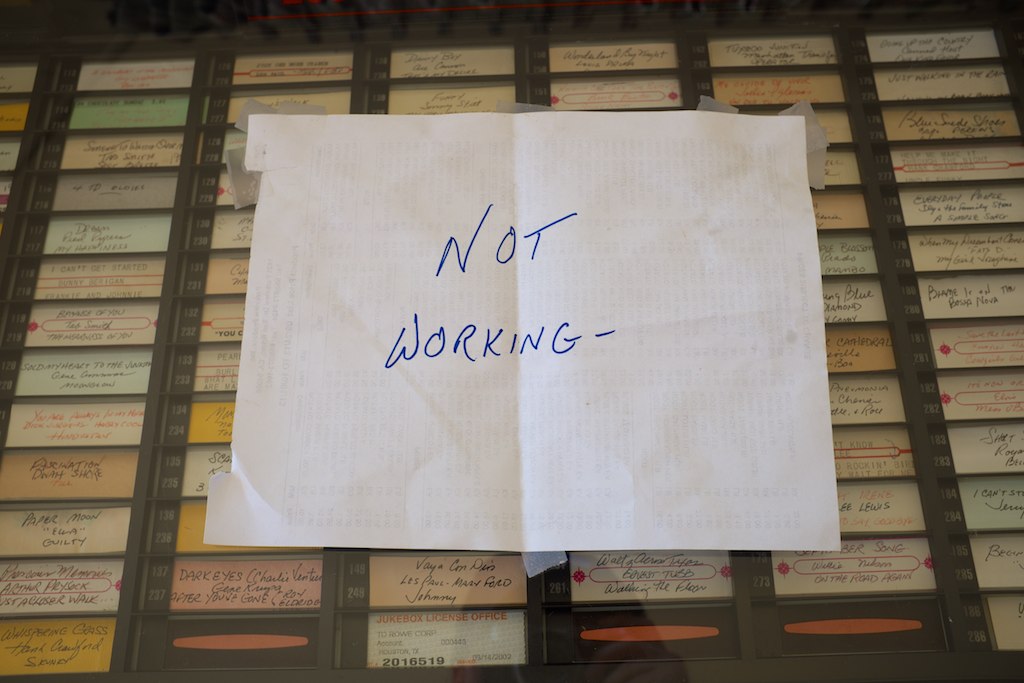 No single element contributes to a bar’s ambiance more than music. The layout can be optimal, the decor can be inspired, the light can be sublime, the location can be ideal — but if the songs cause rolled eyes and exaggerated groans, your beer simply will not taste as good as it might.

There’s both science and art to the music selection at any bar; the soundtrack must be cool but not obtuse, energetic but not cloying, familiar yet hip, remarkable yet unimposing. Crafting a playlist is tricky — and it is not a job that a good bar takes lightly.

That’s why digital jukeboxes are a dreadful, night-ruining scourge that must be stopped at all costs.

I’m not talking about physical jukeboxes — large machines containing a collection of CDs. Believe it or not, those still exist in the wild. While they do leave the choice up to the customer, it’s still within the purview of a bar owner to decide what’s going in there — thus setting the sonic range, if not each selection. Those are fine; the physical jukeboxes at Kelly’s and Gooski’s remain selling points for those establishments.

I’m talking about the internet-connected touchscreen gadgets mounted to the wall at many local bars (including nearly every dive I can name). There are a few different companies creating these pests, but TouchTunes is the one you’ll most frequently encounter; the company’s website boasts it has successfully infiltrated more than 60,000 innocent watering holes.

For a (high) price, TouchTunes machines allow you to subject your fellow patrons to nearly any tune you can name. It’s as if Spotify came through a bullhorn: Whatever song you want to hear can be yours. And everyone else’s, whether they like it or not.

In theory, this allows everyone to play DJ; you can dance to your jam at any bar you visit, no matter what your particular variety of jam might be! Isn’t that great?

No. No, it’s not. Because in practice, this variety means one thing: brutal, sonically alarming competition between divergent packs of drinkers.

On a recent trip to a bar burdened by a TouchTunes machine, my party kept trying to steer the selections towards ’90s-era pop and hip-hop; the better to dance to, after all. A competing faction, apparently unappreciative of the pressing need to incorporate “Shoop” into our Friday night, responded by spamming the machine with particularly amelodic varieties of Scandinavian metal. A third group, fed up with both sides of the conflict, simply played the most unwelcome songs they could conjure in an attempt to drive all of us out of the bar — a feat they nearly achieved around the time Celine Dion began declaring that her heart would, in fact, go on.

And these insufferable genre arguments don’t even move in waves. In an older jukebox, if you made three selections, those three songs would play, then the next customer’s picks would queue up. With TouchTunes, you can pay more to ensure your choice plays next; the machine cedes control of the auditory landscape to the highest bidder. A companion app even allows selections to be made from a smartphone — thus allowing taste-bereft users to make poor choices without even having to walk up to the machine and own up to their horrible music. If you want us to hear, say, "Bodies," nu-metal scourge Drowning Pool's 2001 ode to adolescent violence, you should at least have to endure me giving you the stink eye for the next hour.

It’s a system that leaves everyone unhappy at one point or another; victories in these battles are only ever temporary, and those who just want a drink are the civilian casualties of an irritating skirmish.

Moreover, though — and even in the absence of a digital turf war — bars with a TouchTunes machine surrender the ability to control their own mood. I want to hear country at Bakersfield, not at Eleven. I want to hear punk at Gooski’s, not at Hidden Harbor.

But if the cancerous spread of TouchTunes and its ilk continues unabated, I might have to listen to Kid Rock at all of those places. (Do you know how often TouchTunes users play “All Summer Long?” Constantly. Relentlessly. Eternally.)

I won’t tell you not to patronize bars with one of these machines, because there are too many to avoid. But I will tell you not to use them. Save the dollars that might be spent jockeying for position amidst a shabby parade of mismatched music and put that money towards additional trips to bars that know what they want to be.

Most importantly, though: If someone’s trying to get a ’90s hip-hop thing going, don’t interrupt it. What are you, a fun-hating monster?

This article appears in the April 2016 issue of After Dark.
Categories: After Dark