A graffiti-decorated cake, a sequined jacket for the groom and a violinist playing hip-hop covers wowed guests at this Strip District wedding. 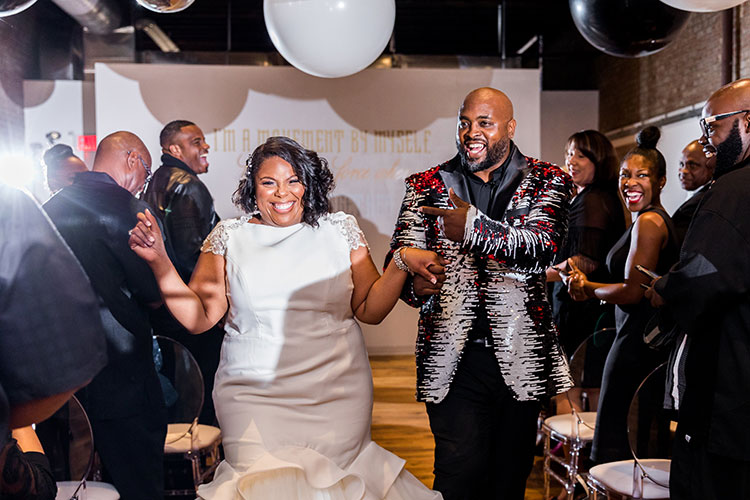 Jameeta Lewis and Lee Davis have been together so long that when they met, Lee gave Jameeta his beeper number.

She stopped in the Downtown clothing store where he was working on her way home from a college class, and the two struck up a conversation.

Fast-forward 25 years of dating on and off, and the pair from East Pittsburgh got engaged in 2017 on Lee’s birthday. Jameeta always went all-out with gifts, so he wanted to counter with a special present of his own.

“He just like one-upped me with the engagement ring,” Jameeta says. 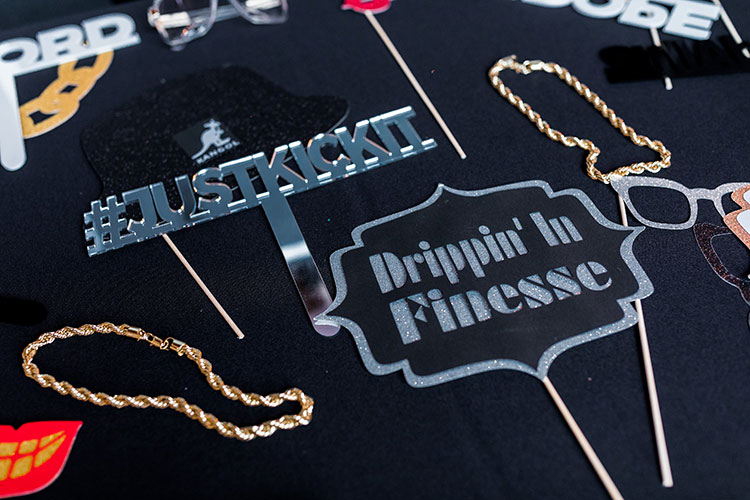 That same spirit to pull out all the stops shined through for their wedding on Sept. 9, at Slate event studio in the Strip District. The evening featured creative and personalized touches, from balloons on the ceiling to custom-cut photo booth props.

“We love music, and we were talking about, ‘How can we include music? What about “love and hip-hop” for the theme?’” Jameeta says.

The idea for the balloons came from Alexis Allen, principal planner of {SHE}, who worked with the couple as a month-of coordinator and consultant.

“They really had the vision and made a lot of that come to life,” Alexis says. “It was a fantastic wedding, and I’m glad I had a part in it.”

She also owns Slate, which was still under construction when the couple first saw it.

“(Jameeta) could see past all the dirt and debris and hanging wires and see what it could be,” Alexis says. 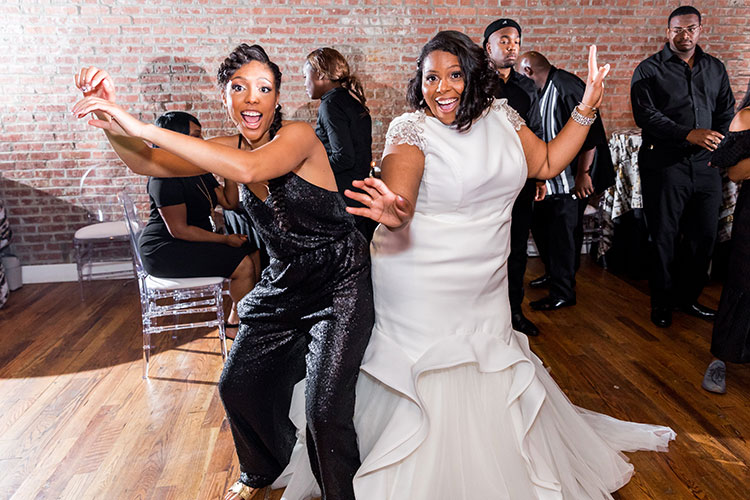 The exposed bricks and plain, white walls became the backdrop for black, white and metallic touches throughout the space, all with a nod to hip-hop music and culture.

In front of a wall featuring a graphic quoting Fabolous lyric, “I’m a movement by myself, but I’m a force when we’re together”, the couple said their vows, incorporating clips of songs by Avant, Beyonce and others spun by DJ Nick Nice.

During cocktail hour, violinist Demola performed hip-hop covers. Jameeta found the Houston artist through Instagram, and the couple flew him to Pittsburgh for their wedding.

“He added a whole different layer of excitement,” she says, especially when their guests recognized the covers he was playing.

As if that weren’t enough entertainment, Jameeta and her daughter Alieyyah Lewis recreated choreography from Beyonce’s 2018 Coachella performance for a mother-daughter dance.

“We really wanted something to be happening all the time,” Lee says.

Even his attire fit in with the theme — he wore a sequined jacket from Mr. Albert’s Men’s World in Cleveland.

“They had some really spectacular dinner and wedding jackets,” he says, and this one matched the red, white, black and blue MCM shoes he had bought in Atlanta. “That (jacket) was one of one in the whole store so it really worked out, and it fit,” he says. 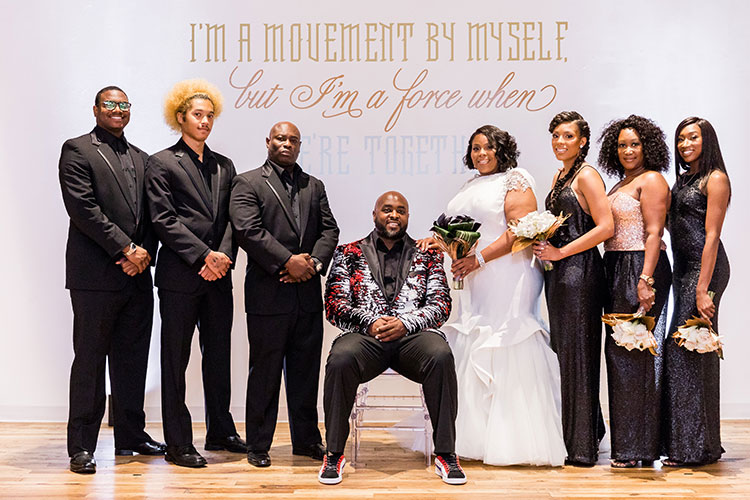 Jameeta planned for her dress from One Enchanted Evening to be pre-bustled after she realized it might take 45 minutes to gather up the train the day of the wedding.

“I wanted to be at the cocktail hour, and I wanted to be having fun in my dress,” which also featured a cape inspired by Solange Knowles and Kate Hudson.

One of her accessories had more practical inspiration; prone to spills, Jameeta wore a custom beaded and sequined bridal bib.

“I’m not ashamed to say I’m messy, I always spill something,” she says.

She says none she saw on Etsy came close to what her daughter’s friend Jasmine Wallace designed; it featured the Cardi B lyric, “Came through drippin’”.

Bridesmaids, two in jumpsuits and one in a dress, wore head-to-toe sequined outfits from Bridal Beginning.

“We definitely did not want normal bridesmaids’ dresses,” Jameeta says. Each bridesmaid also wore a script name necklace as a nod to the hip-hop theme.

Lee’s sons, Jomar and Emmanuel Davis, wore all black, and guests were instructed to do the same on the invitation, to further complement the colors of the decor.

Bouquets featuring white, copper and black touches were designed by Nathan McCarthy at Hens and Chicks.

“Nathan really takes an approach with event design, not just floral design,” and he extended that to the minimalist copper-colored plants and candles in the table centerpieces as well, Alexis says. 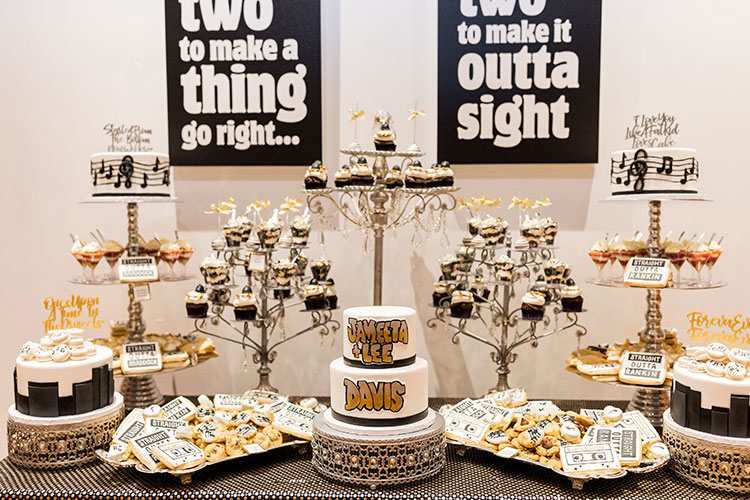 They blended well with the graffiti-decorated cake and dessert table by Bella Christie and Lil’ Z’s Sweet Boutique.

“(The cake was) like the centerpiece of the whole table, and I think that really brought everything together,” Jameeta says.

Looking back at photos and videos of that night, Jameeta says she wishes she could celebrate it all over again.

“Our wedding was so different in a good way,” she says. “There was nothing at the end of the night I wish I had done differently.”