Death by a Thousand Cuts

New research suggests that, despite safety claims from helmet manufacturers, athletes’ brains may be stark naked. 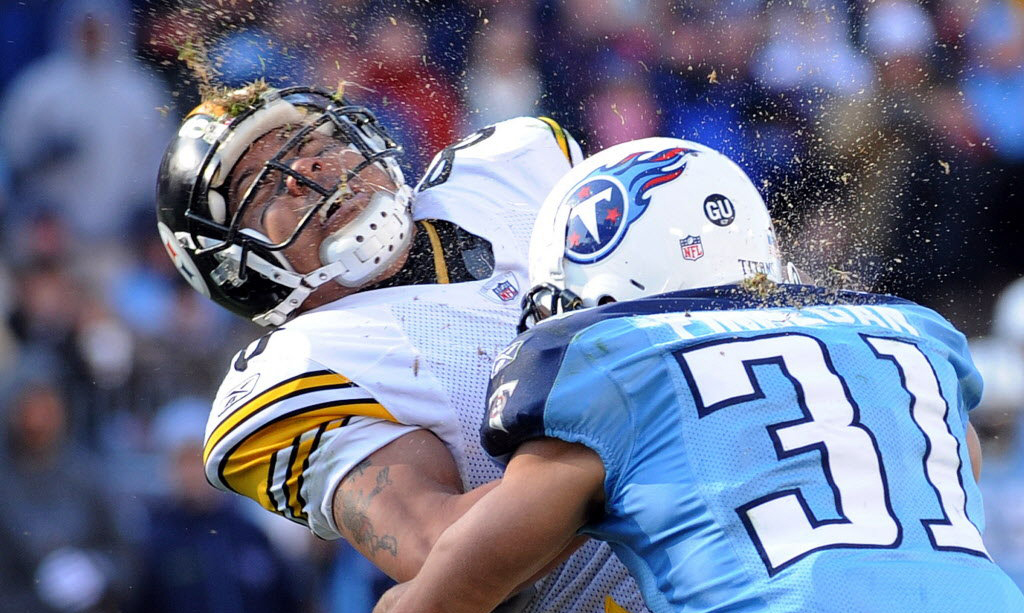 This is the land of the free and the cold-activated beer can; the home of the brave and the Quiznos lobster-and-seafood submarine (made with 51 percent lobster). We relish nothing if not progress, and high on our to-do list is the integrity of the New National Pastime, recently beleaguered by autopsies of gladiators both young and old whose spotted, rusting brainscapes resemble those typically found in septuagenarian Alzheimer’s patients.

The national narrative says that safer helmets are the way forward. Science begs to differ. Riddell’s Revolution Speed football helmet retails for $248.99, boasts a “cool, aggressive” shell design and features something the company has branded “Concussion Reduction Technology.” The Revolution Speed so impressed researchers at Virginia Tech University, who have developed the nation’s first comprehensive impact rating system for football helmets, that it was given a five-star safety rating and deemed the “best available” helmet on the market. For comparison, the Riddell VSR-4, which has been the most prominently used helmet in the NFL and NCAA throughout the past few years, received a one-star rating.

On the surface, the news is alternatively haunting and encouraging. While the NFL does not require teams to reveal which helmets their players wear, the eye-test reveals that many players have adopted the Revolution Speed. Oft-concussed Pittsburgh Steelers safety Troy Polamalu saddles one atop his mane. The sleek helmets appear more commonly in college football, where players have had less of an opportunity to become superstitious creatures of habit. In fact, the Biomedical Engineering department at Virginia Tech was so moved by their own research that they purchased an entire fleet of Revolution Speeds for the Hokies football team.

So, is the war finally over? Can’t the powers that be simply make the Revolution Speed the de facto helmet so we can all move on?

The marketers certainly want you to think we’ve arrived. A promotional video on Riddell’s website features a CBS reporter standing on the field at Rutgers University reminiscing about the first collegiate football game ever played there in 1869. “Players didn’t even wear helmets,” she says in that familiar passive-aggressive TV news cadence. “No doubt being exposed to serious injury. Fortunately, times have changed.” Had the Jumbotron behind her projected comic-sans “Mission Accomplished” over a gently waving stars-and-stripes background, it would not have felt entirely out of place.

And yet, just when it felt like we were on our way to once again enjoying rock-riff midfield obliterations without besmirchment, a jarring study on helmet safety was recently published in The Journal of Neuroscience. Inspired by the work being done at Virginia Tech, a team of researchers from Cleveland Clinic ordered 11 popular football helmets from four different manufacturers, including the heralded Revolution Speed. Then they purchased two vintage “leatherhead” helmets from the 1940s. On the surface, their query seemed absurd: Would the cutting-edge helmets protect players better than the leatherheads?

“We’re trying to understand the concept of death by a thousand cuts,” says lead researcher Adam Bartsch. “Most athletes playing football are not getting hit by James Harrison. Most are getting thousands of common impacts to the head that won’t necessarily make a SportsCenter highlight. But the question is: Are the current helmets optimized to reduce all sorts of impacts?”

In order to understand how it can be possible that the majority of NFL players, who are worth untold million to their franchises, are still wearing helmets with a one-star safety rating, you first need to understand the current gold-standard barometer for helmet safety — the test. This is the sticker that is found on the back of every football helmet in the NFL and NCAA. Developed in 1973, the test focuses solely on high-impact linear acceleration and literally involves dropping a helmeted headform onto an anvil *cue ding-dong “Flintstones” sound effect*.

However, NOCSAE safety scores are not publicized. The helmet merely must pass an “impact-severity” threshold that is deemed sufficient to mitigate the risk of a skull fracture — an injury that helmet manufacturers vanquished decades ago. There has not been a skull fracture in the NFL since the 1980s, and linear force is just one of many components in a collision, which is precisely why fans are often confused as to how certain players can not only survive a wreck but suit up the following week, while less fortunate souls have lost entire seasons to collisions that appear to be minor fender benders.

The key is not how hard the head is struck, but how the brain moves inside the skull.

With a more sophisticated test in mind, the Cleveland Clinic team holed up in their biomechanics lab and simulated routine helmet-to-helmet collisions by smashing a Riddell VSR-4 against a headform that was fitted with the 13 various helmet models. The VSR-4 was suspended on a pendulum that was calibrated to deliver common on-field impact magnitudes in the range of 95 to 99 percent of hits on the field — the cumulative terrors that Bartsch refers to as death by a thousand cuts.

The helmets were mounted with accelerometers, which have been used in many university studies to monitor linear impact. However, the Cleveland Clinic study took it a step further, adding angular velocity sensors to the helmets to gauge how rotational head and neck dynamics might affect the brain in a collision (think of the way Pittsburgh Penguins captain Sidney Crosby’s head snapped around when he was blindsided by a seemingly low-impact collision in the 2010 Winter Classic).

The research team smashed the hard polycarbonate helmets from all angles. Then they walloped the vintage leatherheads. The impact data collected by the sensors was instantly fed to a computer that was running a sort of “virtual brain” called the SIMon Model. Developed by the Department of Transportation, it consists of a 3-D skull and brain with white-gray matter, bridging veins and more than 10,000 nodes — essentially a digitized neurosystem for a crash-test dummy.

The data that came back was shocking.

“In many instances the head impact doses and head-injury risks while wearing vintage leatherheads were comparable to or better than those while wearing several widely used 21st-century varsity helmets,” the study concluded.

While the study was testing the effect of mundane horrors and not the killshots that stir the NFL and NHL offices to debit the accounts of league-sponsored super villains, the red and blue lines plotting the impact data in the Cleveland Clinic’s graphs were stupefyingly in sync.

“To use an analogy, what we’re doing is really akin to a crash test with a Model T versus a 2012 BMW,” Bartsch explains. “You would absolutely expect that with any safety parameter, any way you slice it, it wouldn’t even be close. And yet we found that at common impact severities, there really wasn’t much difference. It’s not that the leather helmets were protecting, it’s that none of the helmets were protecting.”

This all seems intrinsically wrong, and yet, through a neuroscientific lens, the results of the study should not be so dumbfounding. Those with the most experience dealing with head trauma in athletes have been warning that advances in equipment technology will never bring an end to concussions.

“Fundamentally, what causes a concussion is the brain moving inside the skull, and unless we can put something around the brain itself, it’s hard to imagine how technology is ever going to mitigate this injury,” says Micky Collins, director of the UPMC Sports Medicine Concussion Program. “There’s no helmet out there that will ever prevent a concussion from happening. The main focus should be treating athletes as soon as the symptoms appear.”

Dr. Henry Feur, member of the NFL’s Head Neck and Spine Committee and a team physician for the Indianapolis Colts, echoes Collins’ sentiment: “It’s always some new material. We’ve heard it for years. Reducing the G-forces in a collision may help with concussions, but it has yet to be proven. The problem is that the brain is encased in fluid, and in cases of rotational force, there is little you can do to stop the brain from crashing against the skull.”

Bartsch believes that while the NFL and helmet manufacturers are putting an enormous emphasis on concussion prevention, a complete rethinking of sports engineering is needed.

“Football helmets have certainly evolved over the past few decades and are optimized for a certain kind of impact,” Bartsch says. “But I think we’d be wise to take a step back and ask a fundamental question: If today we didn’t have any football helmets and we had to design one from scratch, how can we take an egg and throw it against the wall and design a protective enclosure that not only protects the shell from cracking, but also protects the yolk from being scrambled. That’s an engineering problem that I don’t think is solved by the current polycarbonate hard shell with interior padding.”

TV chuckleheads — especially the really proud, goateed NFL pensioners — have developed a fondness for the half-kidding suggestion that the league should just chuck out the fancy helmets and go back to leatherheads — a spiritual return to the days of mutual respect and sideline cigarettes and gloveless, bloody fingers in muddy trenches. And oh how they laugh and back-slap.

You have to wonder if it would still be so damn funny if they knew how perilously close the modern game is to their fraternal dreamland.

This article appears in the September 2012 issue of Pittsburgh Magazine.
Categories: Steelers