Coffee, craft beer and ‘mad men’ in the arch city. 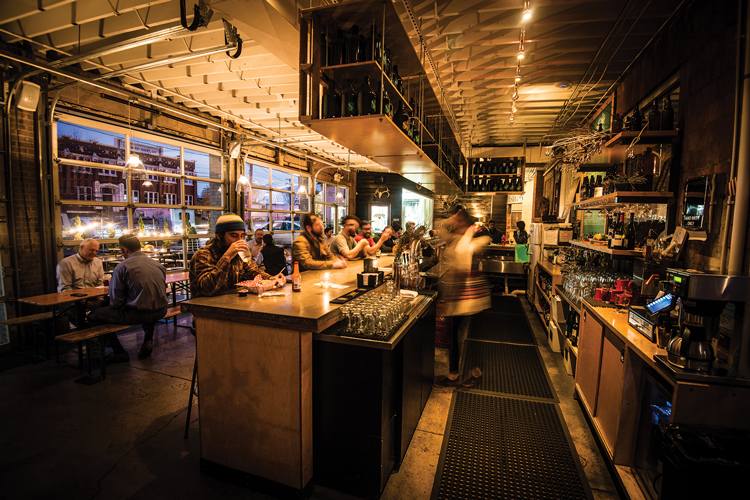 Kenya Wahundura filled my mouth. I had slurped the coffee as the locals do — not a dapper sip but a brawny and obnoxious slurrrp. As one does at a coffee cupping.

I circled the raised round table at One Line Coffee’s back room and sniffed the day’s coffee grounds, dark and earthy like a farmer’s hands. We were sampling — or “cupping” — five varieties. Hot water, just off the boil, is gently added to the grounds; after a couple of minutes, a spoon is used to break the crust of the coffee. This is the moment of peak aroma. A timer is set for cooling; about 11 minutes later, slurrrp … to aspirate the coffee over the entire tongue and distribute the molecules into the throat and nasal passage.

Master tasters observe taste, acidity, aftertaste and body (“mouthfeel”). Some are even sensitive enough to identify the coffee’s country of origin. As a mere pupil (I’ve never been a coffee drinker — never acquired the taste), I closed my eyes and thought Orange. Warmth. Chocolate. Sun reflecting on amber glass. 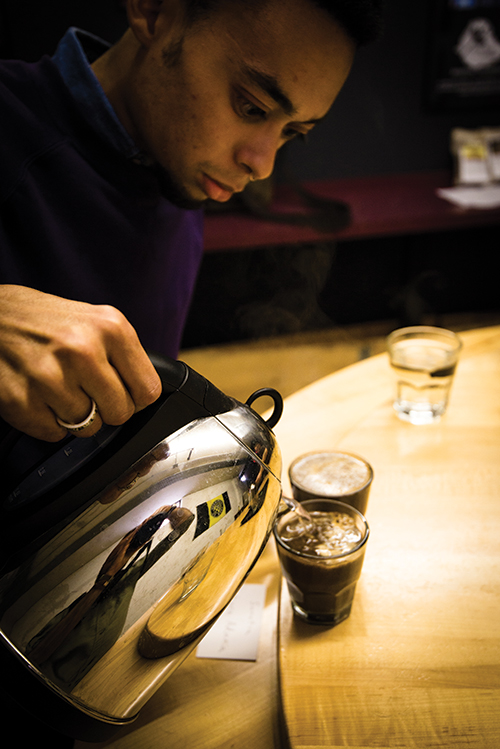 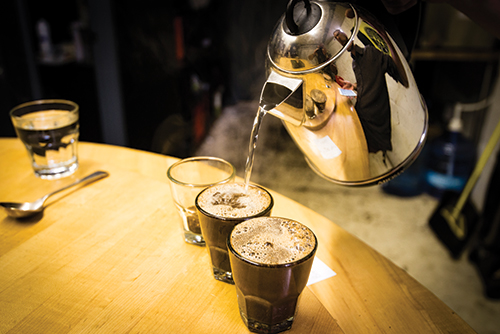 Coffee cupping at One Line Coffee

Columbus — Ohio’s capital city — is not an acquired taste. You love it on sight, and you walk its streets in search of the next burst of flavor.

Start in the Short North neighborhood — the “art and soul” of Columbus. Gallery Hops are held on the first Saturday of each month, but the Brandt-Roberts Galleries (the neighborhood’s largest fine-art gallery) and the Hammond Harkins Galleries are must-stops for art lovers throughout the week.
I like a little kitsch with my coffee, so after the cupping I hit Big Fun Columbus for a vintage-toy fix. Wood floors and high shelves held surprises for a kid of any age. I walked out with a G.I. Joe just because.

Lunch at Brassica is a hummus plate topped with slow-roasted chicken shawarma and crispy onions, with spicy carrots, jalapeño cauliflower and a pita. Wow. Owner Kevin Malhame’s Lebanese roots are evident in every bite. Falafel, beef brisket and glazed lamb bacon are options, as well as a veggies-only hummus plate. Behind the counter, ginger John will be your guide. 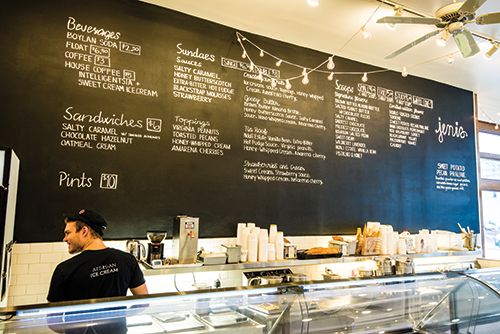 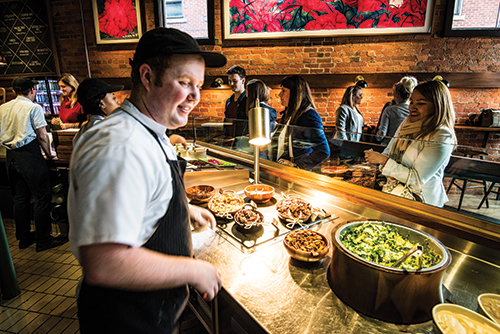 I vow to sample ice cream in every Daytripping city, and Jeni’s Splendid Ice Creams is my Columbus pick. The day’s artisan flavor was Sweet Corn Spoon Bread. Ahem … please, ma’am, I want some more. Sugary, rich and texturally complex — with a voluptuous mouthfeel (there’s that word again). Jeni Britton Bauer opened the first of her eponymous ice-cream shops in 2002 in Columbus’ North Market (more about that later) in the Arena District.

Feeling fat, I walked down High Street and ducked into Samson Men’s Emporium for a shot of virile menswear goodness. I’ll never be as handsome or chipper as proprietor Travis Samson, but a new Fine and Dandy bow tie might at least lend the appearance of approachability. It’s two stores in one, sharing space with T. David Collection’s home décor, barware and antiques. Think leather, wood, flannel, brass. I want to live there. 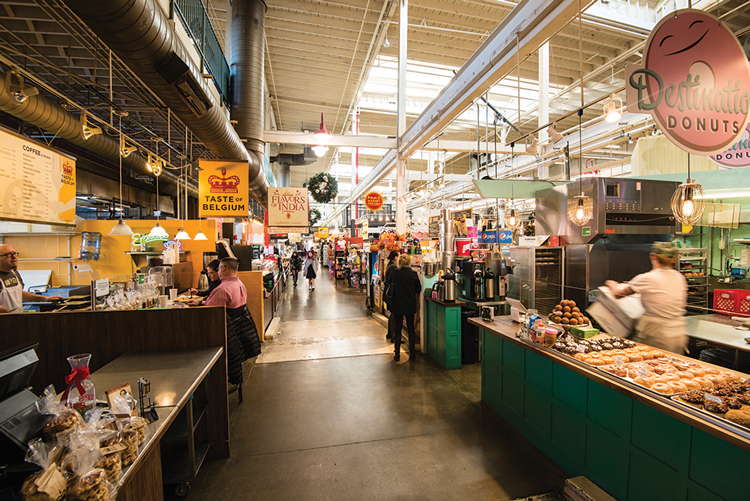 Back to art. The Columbus Museum of Art opened in 1931 with a 500-piece collection; it now boasts 10,000 works of art and, after a recent 50,000-square-foot expansion, deserves a day unto itself. A highlight (and visitor favorite) is Mel Chin’s “Spirit,” so large that it is housed in its own specially built room. On exhibit through Feb. 14 is the work of graphic novelist Eleanor Davis.

At CMA, I was lucky enough to see the gritty and satirical “Mad Men of Europe,” a 1940 watercolor by Ashcan School-inspired artist Reginald Marsh (1898-1954), a favorite painter of mine who is infrequently exhibited.

Riding the wave of craft-beer popularity, Seventh Son Brewing — tucked into a boomerang-shaped building (once an auto garage) — found success with its namesake strong ale, but also try its other brews out on the patio around the fire pits. All are overseen by a friendly gray tiger cat named Assistant Manager. 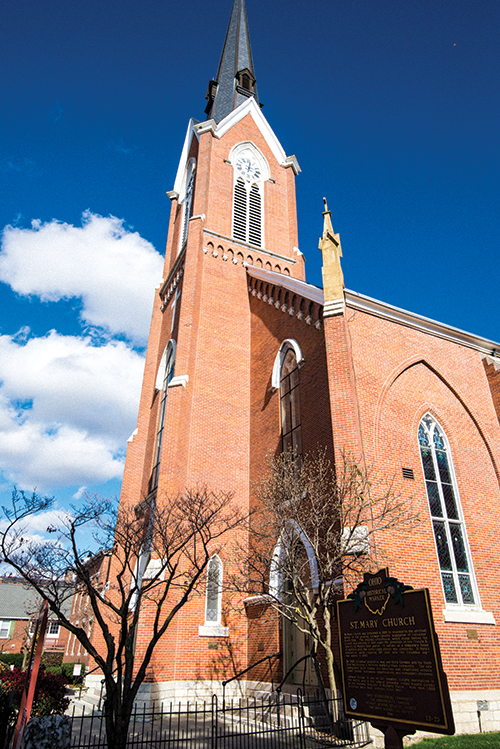 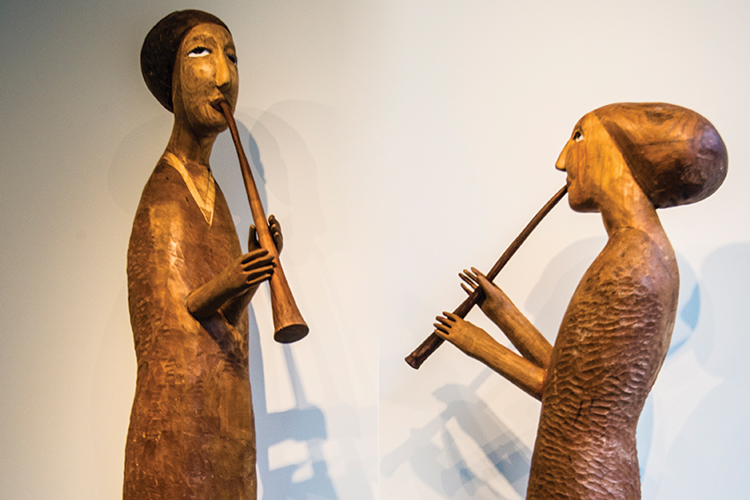 And speaking of beer — Columbus once boasted a neighborhood practically swimming in the stuff. German immigrants founded several breweries in the city’s German Village in the 1800s; the area now is listed on the National Register of Historic Places and features 233 acres of restaurants, boutiques, salons, galleries and homes. All are an architecture buff’s delight. St. Mary Catholic Church is the jewel of German Village; the parish was founded in 1865, and construction of the German Gothic-design church building began the following year.

I stayed the night back in the Arena District and had breakfast at the North Market. If you’re a foodie like me, this public market and its two loops of gourmet heaven will haunt your dough-fried, spice-ground, bacon-cured dreams. Doughnuts, chow-chow, root vegetables, hot toddies, Tunisian chicken stew, risotto, pickles, summer rolls, Poblano Escobar, apple tarts — all for sale and sampling from local growers and producers. For breakfast, the waffles from Taste of Belgium are dense, delicious and deserving of your time. I’ll be back for more. 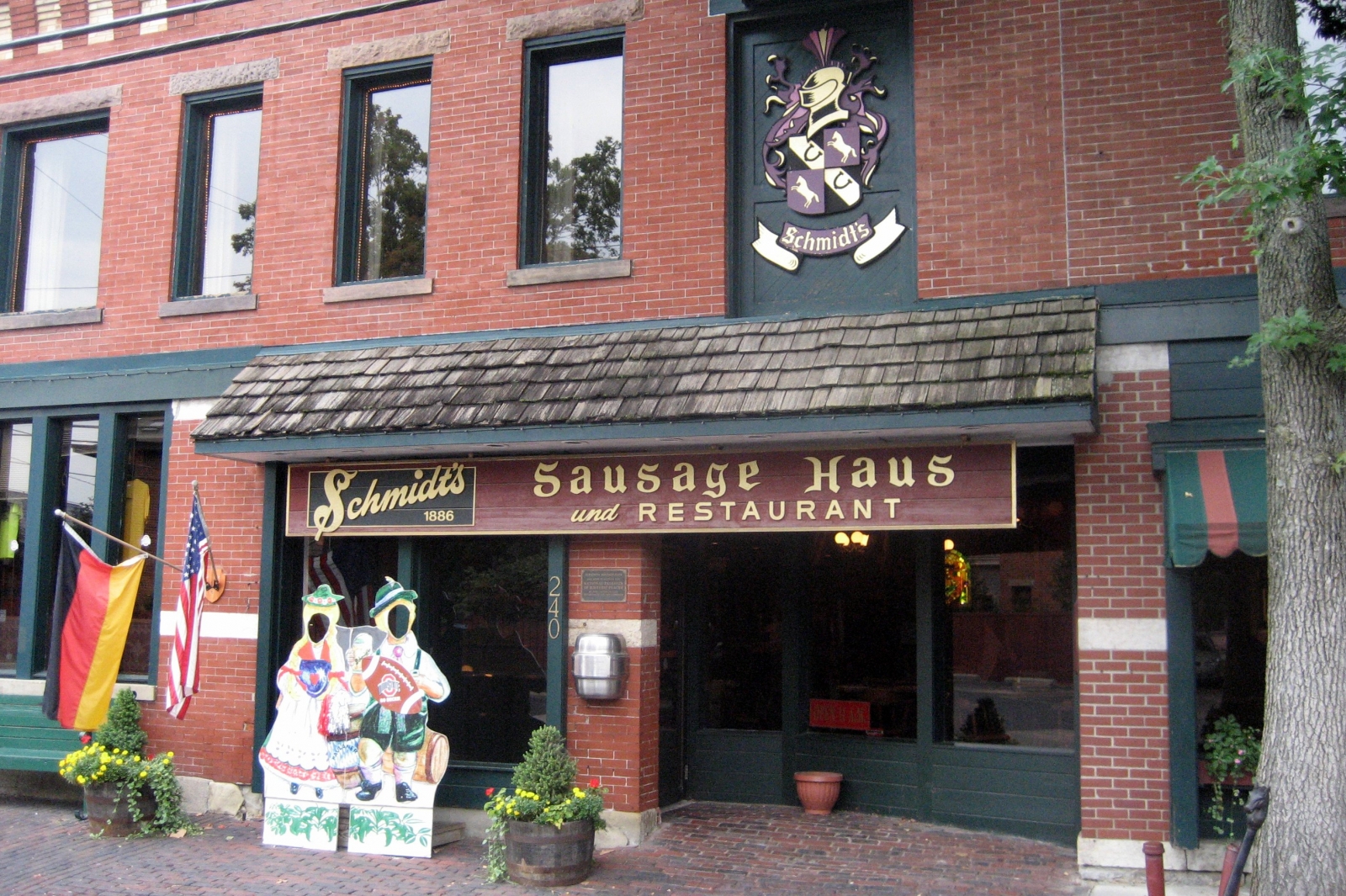 Schmidt’s Sausage Haus is a popular eatery in German Village. The building is a historic livery stable. Someone at your table has to order “the original” Bahama Mama sausage platter — it’s a rule. (schmidthaus.com) 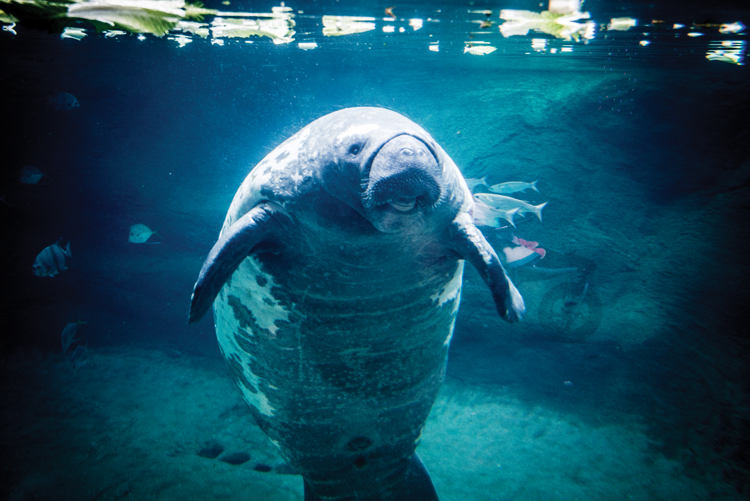 A short drive from the Short North, The Columbus Zoo and Aquarium is home to 11,000-plus animals on 588 acres. The manatee exhibit is mesmerizing. (columbuszoo.org) 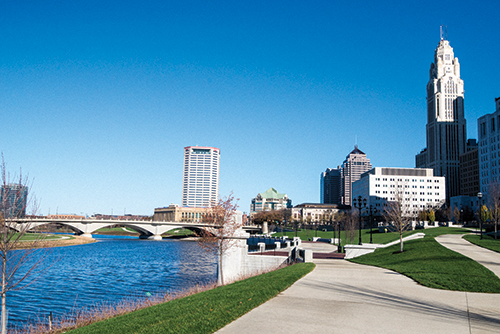 The newly completed Scioto Greenways Project has transformed the city’s downtown district to add 33 acres of new green space for recreation, beautification and improvement of the Scioto River habitat.

Chillicothe was Ohio’s first and third capital city for a short time, but the state legislature voted in the early 1800s to choose a site for a new capital. Thus the city of Columbus was founded. Designed at its birth to become the center of political, economic and social life in the state, the city’s access to transportation routes (first rivers and later roads) ensured its growth to a present population of 800,000-plus.