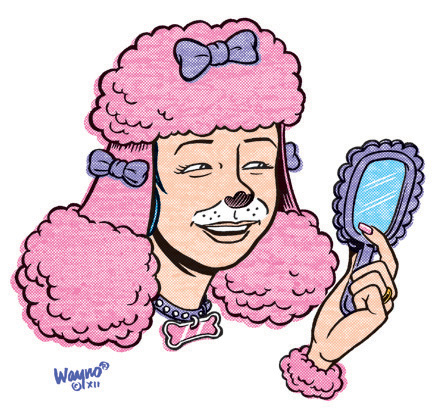 It started in 2006 with a bushy, 3-foot gray tail poking from the jeans of a downtown pedestrian. Puzzled, I followed the man for a bit. It could not be a tail. I must’ve been having a stroke. I asked myself who the president was. I sniffed for the acrid scent of burnt toast or the pungent smell of oranges that would indicate I was going to suffer a catastrophic brain event.

When I passed my hasty self-assessment, I moved on to the only other explanation: A werewolf or alien was unaware that he’d partially shape-shifted in broad daylight.

I surreptitiously snapped a photo with my camera phone and disappeared into the lunchtime crowd — because if you stick around after spotting a man with a tail, you’re either going to become a werewolf snack or the Men in Black will show up to “neuralyze” you back to the days of banana clips and Color Me Badd.

I learned later that afternoon that the “furries” were in town for ANTHROCON, an international convention. My initial reaction to learning that this event was geared toward individuals who dress up as anthropomorphic creatures whose personalities and names they chose and adopt was: What fresh, freakish hell is this?

That was my word — freaks. The whole lot of ’em, from those in street clothes with cat ears to those in fully realized, dead-eyed fur suits. The wolves, ponies and wolf-ponies with wings and udders. The samurai cockroach. Freaks one and all.

What must their parents think? What would I do if my son told me he was a furry? Could the Men in Black neuralyze that out of him?

In 2007, when attendance was more than 2,800, I pointed out that the visiting Milwaukee Brewers reportedly heard “barking and animals sounds” late into the night at the hotel they shared with the furries.

Then, inexplicably, in 2010, when attendance exceeded 4,200, a softening arrived. “This weekend is one of the best weekends of the year in Pittsburgh because it is ANTHROCON 2010!” Clearly the neuralyzer had been set to “brain-scramble” when it was aimed at me; suddenly, I loved the weirdness of the furries. I embraced their proud freakishness. What I once scorned, I now celebrated.

This past June, I headed to the Westin Convention Center Pittsburgh Hotel to finally see furries in the flesh (well, fur) at ANTHROCON 2012. I watched a young girl dressed in a bear costume leap around with her father looking on, not the least bit phased.

I watched as children hugged furries like they were Mickey Mouse (if Mickey had a cow’s body with a kangaroo’s pouch). I watched as each furry strutted into the lobby to be met with the flashbulbs, “oohs” and “ahhs” normally associated with a Hollywood superstar — except instead of Brad Pitt, it was a quad-nostriled, horned ram dressed as a Jedi knight.

I finally understood why they do what they do. Sure, there’s some true weirdness that happens in the underbelly of anthropomorphism, and some might take it too far — and there are some suits so odd that you can’t help but think to yourself, This must be what the Muppets look like to each other when they’re tripping on acid.

But are they really that much weirder than anything you see on “Yo Gabba Gabba?” They’re decent people who love the freedom they have behind their masks. A shy introvert can lope down Penn and high-five strangers having coffee at Seviche. A buttoned-up lawyer can become a glowing-eyed lion who dances without cowardice. A painfully shy wallflower can brazenly strike a wolf-like pose that will go viral on Twitter in an hour.

They can be children again, using the cloak of fur-suited anonymity to be whatever they want and say whatever they want. As a formerly anonymous writer who once flew freely behind the safety of her own mask (but who is now shackled to a name and face), I should have long ago seen this. There’s nothing weird about it.

Unless they’re dressed as pigeons. If they are, that’s just seriously messed up.

This article appears in the August 2012 issue of Pittsburgh Magazine.
Categories: From the Magazine, PittGirl