With only 52 days left, will the pressure of a friend's perfect wedding and the bride-to-be's DIY nature be too much to handle?

We have now passed the two-month mark, and things are starting to get very stressful. It didn’t help that I was a bridesmaid in my best friend from college’s wedding on July 24. She had every detail finely tuned–from the out-of-town bags filled with candy, lotion and personalized water bottles to the very generous bridesmaids gifts (I’ll just say that among other things, my goody bag contained both a "little blue box" and a leather Coach wristlet).

Jamie’s Cleveland wedding was perfect, sans some in-law drama. The weekend began with manis and pedis followed by a tea party luncheon (which the mother-in-law was unable to attend due to a once-in-a-lifetime exhibit at the Rock and Roll Hall of Fame). Later that evening, the rehearsal went off without a hitch and was followed by a glutenous dinner at Buca di Beppo.

Before bed, Jamie obsessively checked the weather forecast, which consistently predicted an 80% chance of showers and thunderstorms. As luck would have it, we awoke the next morning to sunny blue skies. It was unbearably hot, but at least the sun was shining. There wasn’t a drop of rain in the sky until after we arrived at the reception.

The ceremony was beautiful, and the happy couple barely heard the priest call them both Jamie on several occasions. The reception was picturesque, with elaborate lighting and stunning floral centerpieces, and not even melted raspberry sorbet or a sister-in-law’s temper tantrums could put a damper on their special day. Overall, the entire weekend was perfect, and the newlyweds rode off into the sunset on a three-week honeymoon in the Maldives.

Spending Jamie’s entire wedding weekend with her, and watching how calm she was just minutes before walking down the aisle really put things into perspective for me. Yes, there were plenty of dramatic moments, but in the end, she didn’t let any of them ruin her dream wedding.

I’m trying to keep that in the back of my mind, as Mr. Right patiently waited as I spent hours at the craft store picking out paper and 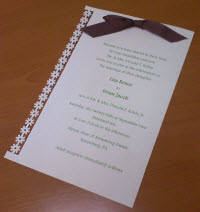 stamps, as we were tirelessly tying ribbon onto our handmade invitations; and when the company discontinued the bridesmaids’ shoes and one maid was left with none. But its hard not to get caught up in the moment and freak out about the smallest, most insignificant things.

I know its my fault for insisting on a DIY wedding. I’m a naturally frugal person, and I can’t stand to pay someone else to do something I am capable of doing on my own. Why would I pay $5 per invitation when I can buy a box of 50 for $19.99 at Target and print them myself? Do I really have to pay a florist $600 for wedding party flowers, when I can get 250 Gerber daisies for only $300. I think not.

So, I’ve sentenced myself to DIY hell, and as the clock ticks, its only going to get worse. I swear, I’m not a bridezilla, I just have a tendency to overreact. It’s times like these that make me so thankful to have such a kind, patient and forgiving husband-to-be.
52 days to go…