When the bride and groom hail from different backgrounds, a planning balancing act ensues. Here are two weddings that incorporate Hindu culture with style. 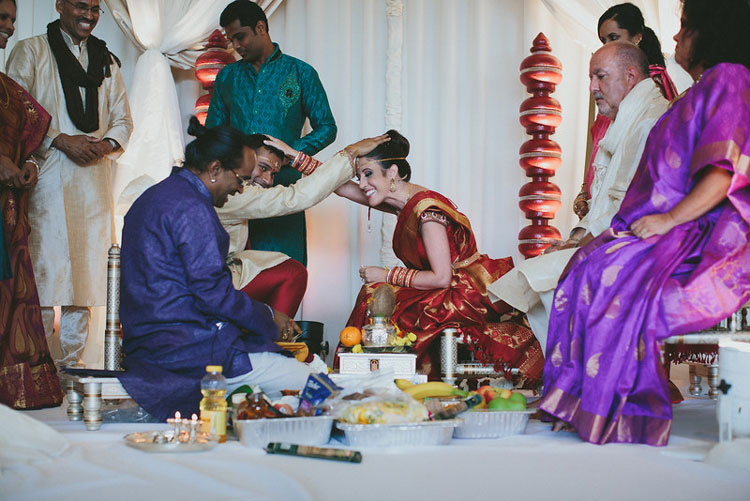 When Megan Thomas imagined her wedding day, she did not envision the extravagance that would come from marrying someone of Indian-American heritage.

“My vision for my wedding was always very simplistic,” Megan says.

Instead, her wedding to Pranay Vaddi featured a Mehndi Party, two ceremonies and a groom’s procession on a white horse.

Megan and Pranay’s festivities began the night before the wedding when Megan and her bridesmaids received Henna tattoos on their feet as part of an Indian pre-marriage ritual called a Mehndi ceremony.

Hair and makeup preparations for Megan and Pranay’s two ceremonies and a reception at Sen. John Heinz History Center began at 6 a.m. the following day, Sept. 6, 2014. 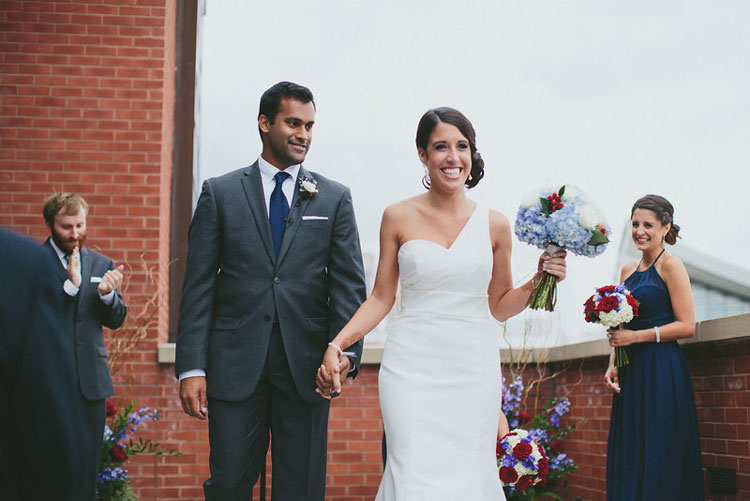 Next on the agenda was the couple’s non-denominational American ceremony, giving Megan the chance to wear a traditional white dress and walk down the aisle with her father.

After lunch, guests attended a Hindu ceremony to honor Pranay’s Indian heritage. Megan wore a red saree, the traditional garb of an Indian bride. Pranay arrived atop a white horse to the sound of a traditional Indian dhol drum, fulfilling the Indian groom’s procession called the baraat. 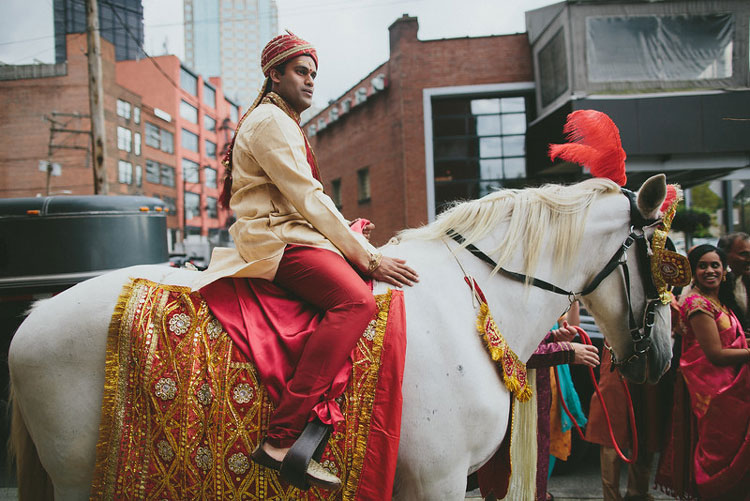 “The Indian culture has so much color and so much music, so it was just kind of a big party,” Megan says.

She says the Hindu ceremony was more interactive than the intimate Western ceremony. The bride and groom’s families stood with them on the wedding mandap, a Hindu wedding structure, and participated in parts of the ceremony. Guests sprinkled rice on the couple’s heads while giving their blessings as a sign of luck. At the reception, Megan and Pranay offered both Indian and American food and played a mixture of each culture’s music.

“The guests overall had so much fun, especially the guests on my end because it wasn’t something they were used to,” Megan says.

Megan and Pranay had to compromise through scheduling in order to accommodate both family’s wishes on their wedding day, but Megan says she has no regrets about the way her multi-traditional wedding turned out.

“The biggest thing that we struggled with was time,” she says. But they were able to fit both ceremonies into one day to honor each culture and please everyone.

“It just would have been a disservice to one of us to pretend we didn’t come from different backgrounds,” she says.

Erin Calvimontes, owner of Divine Celebrations, specializes in weddings that marry two cultures. She says that understanding is an integral factor in a successful fusion wedding.

“Hire a planner [who’s] familiar with both cultures … and if [you] don’t hire a planner, sit down and really try to understand where each family is coming from,” she encourages. 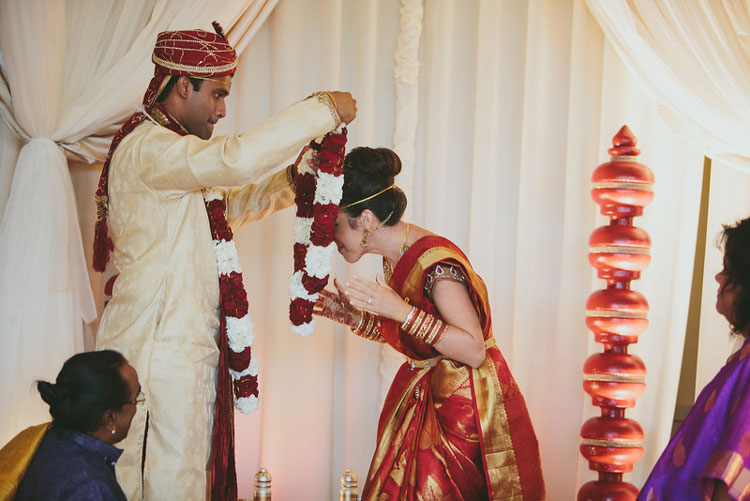 She says that incorporating both the bride and groom’s cultures into a wedding helps to bring their families together.

“It truly is a blending of families, and it makes both cultures feel comfortable on a very special day in the [bride and groom’s] lives,” she says. 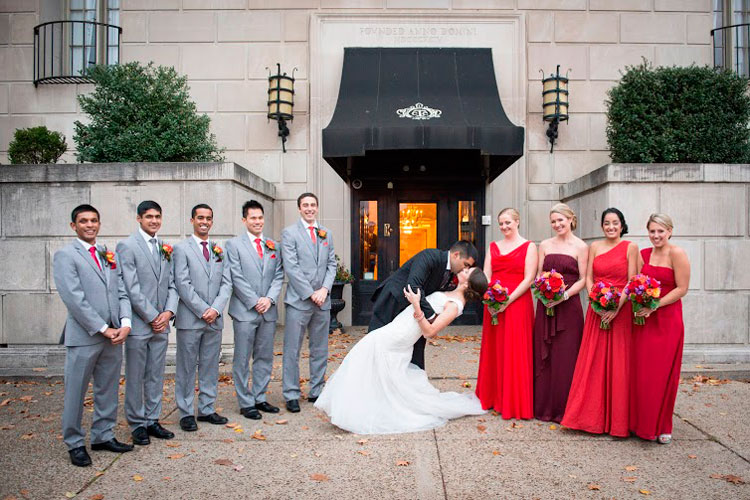 Annaliese Cole and Bhanu Trehan chose to fuse the bride’s western Pennsylvania German roots and the groom’s Indian-American culture for their Nov. 1, 2014, nuptials at the Twentieth Century Club in Oakland. Annaliese says that maintaining communication was the key to pulling together a successful event. They were able to balance each family’s desires and create an event that showcased both cultures.

“In the end, we both had a very shared vision,” she says.

Bhanu is a wedding DJ, and he often DJs Indian weddings with Annaliese’s help. The couple had a lot of material to draw from for their own fusion wedding.

The night before the ceremony, they celebrated with a Mehndi Dinner, blending the traditions of a rehearsal dinner and a Mehndi party. 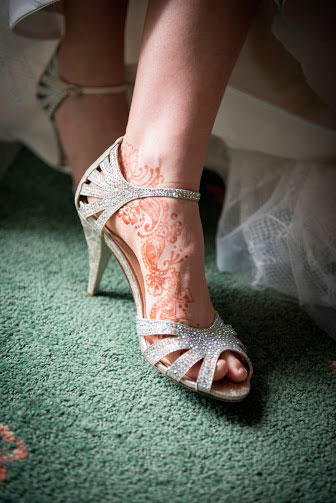 The women in Annaliese’s family enjoyed getting their Henna done because it lasted several weeks and they were able to show it off after the wedding.

According to Annaliese, guests arrived at her and Bhanu’s event with an open mind.

“[Their reaction] was very positive. I think everybody that came to the wedding was expecting something they weren’t familiar with,” she says.

Bhanu also participated in a traditional baraat, he but opted to arrive in a classic car instead of a white horse. 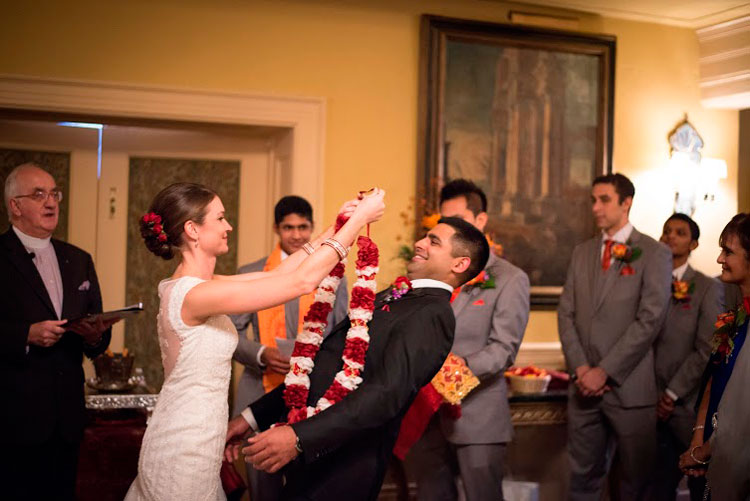 Their ceremony incorporated both Christian and Hindu traditions. Annaliese’s minister and Bhanu’s spiritual 17-year-old brother officiated together. The couple participated in the Indian custom of Var Mala, a garland ceremony that confirms that the bride and groom are choosing to marry each other.

“It’s equivalent to the point in a Christian ceremony when you say, ‘Yes, I want to marry this person,’” Annaliese says. 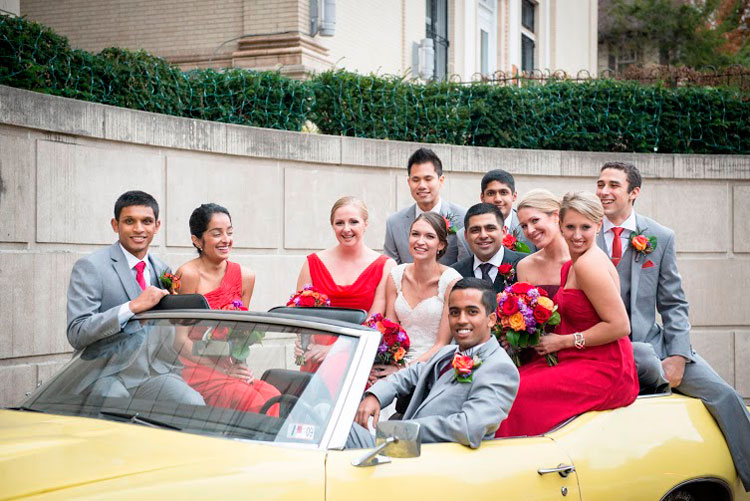 At the reception, guests were served a mix of American and Indian fare. The playlist included Bollywood music, traditional American wedding songs and even a couple of polka dances as a nod to Annaliese’s German heritage.