PittGirl is urging you to stop stuffing your face when Grandma sticks baklava in front of you — and instead, ask her how to make that killer dessert. 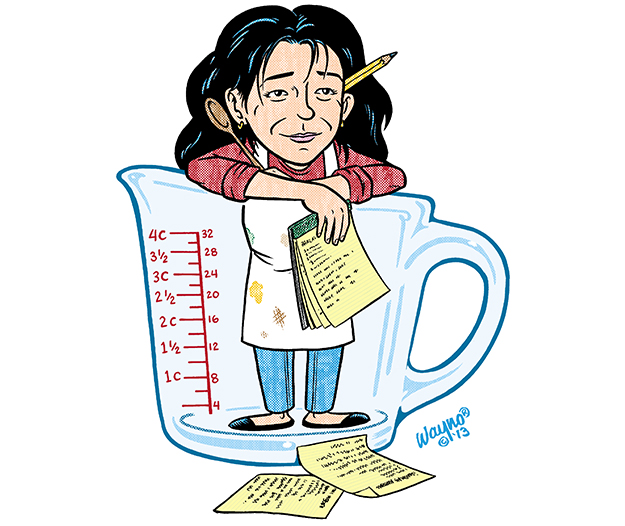 It was a capital N followed by a bunch of O’s and 10 exclamation points. Punctuation overkill, yes, but I didn’t care. “Noooooooooooo!!!!!!!!!!” is what I texted my cousin when I learned that none of my relatives had inherited my late grandmother’s baked macaroni and cheese recipe.

But at what proportions? How much heat? For how long? What was the magic formula that would yield a piping-hot, savory homemade dish exactly like my British grandmother would make for my Syrian grandfather?

I was distraught — and still am.

Months earlier, I had decided that it was time to learn the Syrian recipes my ’Burgher Gram (who had passed away 10 years prior) had been taught by her mother-in-law — the recipes she later spent decades perfecting — meat pies, spinach pies, baklava, grape leaves, kibbee. Even her Texas sheet cake, no-bake cookies, broccoli soup and banana-nut bread.

I spent the winter gathering recipes from different family members, and weeks taking painstaking notes and photos as my mother and aunt taught me recipe after recipe: Fold the spinach pies into triangles like so. Pinch the kibbee into little footballs like so. Roll a grape leaf like so. Sure, my first five spinach pies looked like parallelograms, my first batch of kibbee footballs were decidedly baseball-shaped and my grape leaves exploded — but by the end, I had it down.

I made a perfect tray of lemon-y baklava for a Christmas party without swearing more than five times because I’ve been cursed with the baking equivalent of a gardener’s black thumb (we’ll call it the devil’s spatula).

I pressed on, gradually building a recipe book that I’ll soon give to all of my cousins and sisters, who also grew up loving the dishes our grandmother fed us every Saturday. It was when I fondly recalled the oven-baked macaroni and cheese, with the lightly dusted breadcrumb topping and mild, gooey cheddar (or at least I think it was cheddar), that I sent out the call for her recipe.

It was gone. She never wrote it down, and when she was alive, nobody had bothered to ask her to do so. So I’m left standing over my stove, staring down at something called a roux, which I’m pretty sure is French for “useless blob of flavorless burnt nothing,” trying to recreate a dish that I haven’t tasted in 20 years (but one that I spent 17 years devouring whenever it was placed in front of me).

I’m testing cheese-to-butter-to-milk ratios. Wondering if I should use regular milk or condensed milk. Considering the possibility that I need to put onions in it. Debating whether a splash of chicken broth was ever stirred in when she made it. Questioning whether she used a roux at all (if that is its real name). Fretting that the recipe is really gone forever. Considering a séance to try to get it out of her.

Why am I telling you this? Because Pittsburgh is full of mothers and grandmothers who bake their ancestral dishes over and over while their loved ones take the recipes for granted. If you still have the chance, take the time to get those recipes from the matriarchs in your family. Sit them down and ask them to write them out — or better yet, ask them to teach you exactly what to do. Take pictures and notes. Get the perfect pierogi recipe — and the ladylocks, haluski, city chicken, pizzelles and spaghetti sauce. Pass them on one day. Don’t let them die.

Lest you’re left with nothing but guesswork and an uncooperative Ouija board.

And while you’re at it, could you ask your grandmother if a woman named Margaret David ever handed her a recipe for macaroni and cheese?

Because all I’m getting out of this Ouija board is “BW6-Goodbye.”

This article appears in the April 2013 issue of Pittsburgh Magazine.
Categories: From the Magazine, Hot Reads, PittGirl