Crosby, Concussions and You 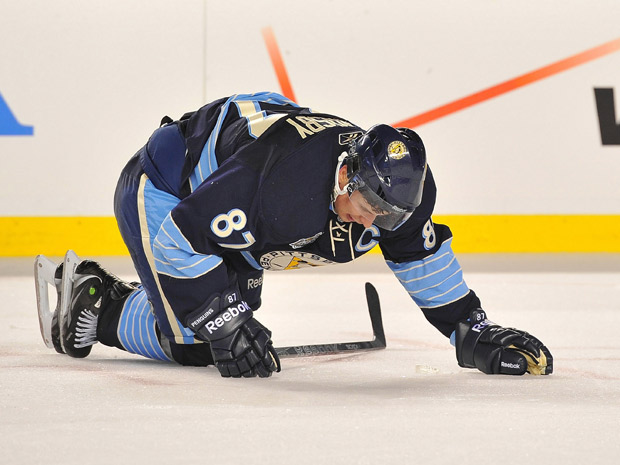 Last month, I had the pleasure of interviewing world-renowned concussion specialist Dr. Micky Collins. While Collins treats more than 4,000 concussion patients each year, including many high-profile NFL stars, one of his patients happens to be Sidney Crosby.

Collins couldn’t discuss Crosby’s initial injury or his current progress, but our discussion on the real nature of concussions—both how they occur and how athletes recover from them—can help to debunk the maelstrom of rumors, misunderstandings and inconsistencies surrounding Crosby’s eight months of post-concussion limbo.

Please note: Collins’ comments are not about Crosby specifically. They are about the complex, broad issue of concussions, a serious injury that affects athletes from PeeWee leagues to the NHL. The connections drawn from Collins’ comments are that of an unqualified blogger, not a doctor. But after listening to some of the pseudo-science and talk-radio hogwash that’s been swirling this past week, I thought the dialogue could use an injection of facts.

1.  A concussion is not a headache, and overcoming it has nothing to do with toughness
Dr. Collins: "Let’s talk about what actually causes a concussion. Inside the brain we have billions of cells called neurons. There’s more neurons in our brain than there are stars in the sky, and each neuron is connected by an axon. And the way we behave as human beings is that one cell talks to another cell via the energy that travels down the axons. That’s what controls our behavior as human beings. When a concussion happens, the membrane to these cells gets stretched and a chemical called potassium leaks out of the cell, which triggers an increased demand for energy. The brain is actually saying, ‘Oops, I need more energy—something’s wrong.’

At the same time, there’s a second chemical called calcium which is supposed to be outside the cell, but it leaks into the cell. When that happens, our blood vessels constrict. So at the very time our brain is demanding more energy because of the potassium release, we’re actually getting less cerebral blood flow because of calcium influx. At the end of the day, what a concussion is, is that the brain cells are starved for energy and they aren’t communicating with one another as well as they should.

No one understands how important the brain is until you injure it. It’s not an easy life to live when you have a concussion. It effects the way you think, how quickly you can respond, how you feel, your mood, your sleep. Who we are is defined by all those neurochemical changes. Just because it’s invisible doesn’t mean it’s not a serious injury."

In the frustration that has started to percolate in Crosby’s prolonged absence, a growing minority of Penguins fans have begun employing unfair comparisons. They point to former Penguin Ryan Malone taking a puck to the face and playing with a broken nose in the 2009 Stanley Cup Finals as a counterpoint to Crosby’s long layoff. But a concussion isn’t a surface injury. It’s a neurological crisis which only gets worse as a player tries to fight through the pain. Case in point …

2. The worst thing you can do when suffering from a concussion is return too soon
Collins: "When brain cells are in this energy crisis, there’s two things that you do not want to do. Number one is get hit in the head again. Because if you get hit in the head again when this problem starts, a lot less bio-mechanical force is going to cause what some people think is another injury, but which is actually an extension of the first injury. It doesn’t take much of a blow to cause that energy crisis to become worse and worse and worse.

The second thing you don’t want to do, which a lot of people don’t understand, is to increase the demand for energy too quickly. The biggest problem I see is kids going back to school when they have a concussion. When you’re studying for a physics test or taking notes in class, that’s driving up the demand for energy dramatically. We actually see kids who don’t even take a second blow to the head who have months of recovery because they’re pushing too hard."

We know Crosby’s work ethic extends well beyond the weight room. He’s a hockey nerd who loves his homework. He watches more hours of game film than your grandma watches of PBS. It’s hard to imagine someone like Crosby, who has worked his entire life to become an NHL player at the expense of pretty much everything else in his life, sitting around doing nothing for months on end. With most injuries, the harder a player works in rehab, the quicker they return. With a concussion, the less they work, even mentally, the easier it is for the brain to heal.

Those clamoring for Crosby to be cleared for contact by training camp should Google search Eric Lindros, Marc Savard, Mike Richter or Keith Primeau—all big names whose careers, and post-career lives, have been turned upside down because they were unlucky to play in an era when the science behind concussions was lagging. The Crosby concussion seems unusual because it is unusual. Luckily, it happened on the cusp of breakthroughs in concussion research. Ten years ago, Crosby would have probably been cleared for contact and Penguins fans would be thinking about Stanley Cups instead of axons and neurons. Ten years ago, Crosby would’ve been “tough and gritty and a capital C- Competitor” and all the purple adjectives armchair blowhards scroll like hieroglyphics on the walls of their hyperbolic chambers.

Ten years ago, Crosby would have been Eric Lindros.

But concussions snuffed out Lindros’ stardom by age 29, and after several fits and starts, his career was over by 34.

Have you, armchair alarmist, ever felt the burn of an NHL shift? Have you ever battled for a puck in the corner while breathing through a straw? Back-checked through quicksand?

Why would you want the face of your franchise, the face of the game you love, doing all of this normally dizzying, suffocating, nauseating, backbreaking work while his brain was starved for energy? This is not a broken nose. This is not about heart, or balls, or will. This is about chemistry, about the sophisticated and fragile nerve center controlling the marionette we call our bodies operating at half-capacity.

So eat a Cheeto and have some compassion if not patience, Recliner-Bound Contrarians.

3. The alarmists need to calm down. This is not career ending.
Collins: "The coolest thing about my job is that the brain wants to get better from this. If you manage this correctly, the potassium will go back into the cell, the calcium will go back out of the cell and that membrane will go back to normal. The great majority of the time, you can hit the reset button on these athletes, if you make sure, again, that the cows are back in the barn. You have to do the right evaluation to make sure that’s happened.

Crosby’s prolonged layoff has turned into a metaphor for a lot of things: Old-time hockey vs. new-school science, traditional reporting vs. the rumor-mongering wind-tunnel of the blogosphere, and perhaps at its core, blissful ignorance vs. knowledge that’s hard to stomach.

And yet, in the simplest terms, Crosby’s eight months on the shelf is about none of that. It’s about a man, and a good one at that, who is struggling to become whole again. We could have a piece of him now—skating and checking and scoring goals that light the CONSOL on fire. But then deep down inside, even the most steadfast Old-Time Hockey acolyte would have a little fire flickering inside their stomach each time Crosby rounded a blind corner or cast his eyes down to retrieve a puck at his feet.

We know too much, and we can’t go back. So we wait for this man to become whole again—for the calcium to recede and the potassium to nourish the mind and for the neurons to mend. Because this is real life and a real human being, not some nostalgic fever dream of The Way Things Were. Because this is the CONSOL, not the Bloody Colosseum.