In Pittsburgh, the superheroes don't need to change into capes to save the day. 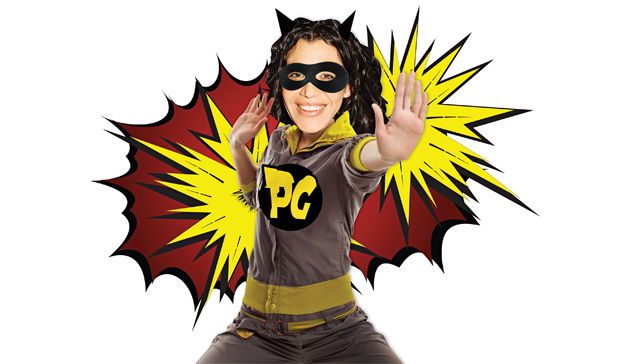 Frantic cries of “Stop! Stop him!” were the first indication that my husband and I had stumbled into something out of the ordinary while we walked from PNC Park to downtown Pittsburgh, where we had parked our car one warm, sunny early evening.

We stopped in our tracks at the corner of Fifth Avenue and Market Street to watch as one man sprinting up Fifth became two, then three and finally six strangers in hot pursuit of a thief clutching a purse; he ran away from them, and the sobbing young woman slowly walked behind, alone and in a dazed shock.

We watched the bandit and the group of pursuing men turn a corner near One PNC Plaza, disappearing out of sight.

My husband and I weren’t exactly sure what we should do. We stepped into the fray just five seconds too late to try to help the men catch the thief. (Plus, I was wearing cute heels. )

I spotted a woman standing near a light post at the corner of Market Square. She was clearly shaken up, glancing around as if she didn’t know what to do with herself—as if she had woken from a dream and found herself standing on that corner. She was in her 40s and dressed up for a lovely night on the town. But she was alone.

My husband and I approached her.

“We saw. Some men took off after him. Hopefully they catch him.”

“My husband—he just …,” She looked around anxiously.

“He ran after the thief?”

“Did he say anything to you before he took off?”

She shook her head and blinked back wetness in her eyes. “Nothing. He just … He just ran. And this is where he left me. And I’m scared to go look for him because … What if I can’t find him? What if something bad happened to him?”

I patted her shoulder.  “I’m sure he’s fine. Does he often do things like this?”

“Well, yes—in that he doesn’t think! He just helps. I don’t know why he does that.”

I motioned to my husband that he could go into our Market Square restaurant to check on things after being away the entire evening. I would be fine.

I told the worried wife to stand where she was—that I would go find her husband because I saw which corner the men had turned. I set off to find him armed with nothing but his first name. We’ll call him Ted.

Sure enough, right there in the dark shadowed area between One and Two PNC plazas stood the men. They were surrounding the thief, who was now seated on the ground looking up at his pursuers while a police officer stood with them. About 10 feet away, the young victim was sobbing into her cellphone while two women, strangers to her, consoled her.

I hesitantly approached the group of men. “Ted? Is Ted here? Ted?”  That’s what I was saying out loud, but inside I was thinking, He’s a spring chicken. Probably wearing running shoes, unless he’s one of those ultra-marathoner types who doesn’t wear shoes. He’s probably a trained sprinter. Maybe a gold-medal hurdler. Possibly checking his pulse to ensure he’s reached his optimal heart rate. Maybe he’s running laps of the plaza to cool down. Maybe stepped into a phone booth without explanation.

“Ted is over there,” one of the men said as he pointed to a man standing away from the group. He was pacing. Breathing deeply. Clearly trying to control the adrenaline rush.

Ted was joined by five other heroes of various ethnicities, ages and, well, girths—a ragtag group of Pittsburghers who might as well have been wearing capes. Eventually, I was able to escort Ted’s wife to him, where she hugged him tightly as I walked away to find my own husband, knowing that the thief had been caught, the victim would be fine and Ted and his wife were reunited.

You know, Pittsburgh became Gotham this past summer for a film production, but truly, with men like Ted and his partners in crime-stopping—partners who also probably left their loved ones standing dumbfounded in their retreating wakes without even thinking twice before chasing a thief—who needs Batman?

This article appears in the November 2011 issue of Pittsburgh Magazine.
Categories: From the Magazine, Hot Reads, PittGirl