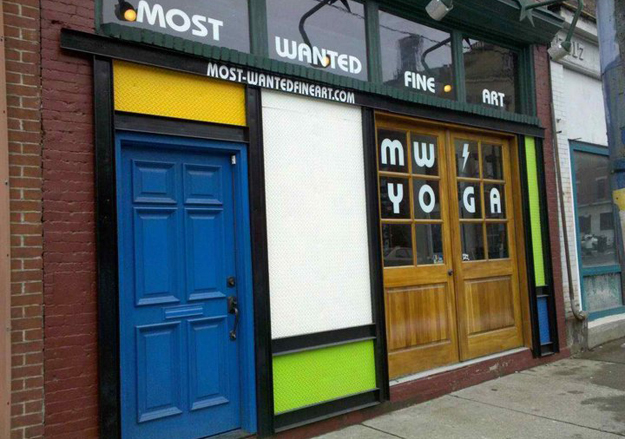 Photo by Most Wanted Fine Art

Crash Course in 'Burgh Stand-Up
Looking for a nice all-in-one introduction to Pittsburgh’s booming stand-up comedy scene? Check out the second installment of Dr. Brian King’s Fresh-Cut Comedy showcase at Most Wanted Fine Art Gallery. After his debut in early 2012, King —  a touring comic and trained psychologist with a knack for putting together knockout shows —  is making a return to Bloomfield for a second round.

The good Dr. King will be taking the stage alongside a roster of local standouts and up-and-comers, including Dan Jenniches, Chris Kemp, Molly Sharrow, Robert X and more; the hilarious Eric Donaldson hosts. The small gallery space is surprisingly well-suited for this kind of show, creating a great, intimate atmosphere where the laughs flow easily and the audience can feel involved. (But good involved. Not “targeted for on-stage abuse” involved.) And for only $5, why not get a hilarious overview of stand-up in the ’Burgh?

'Farce, Feminism and Fun' at Little Lake Theatre
The local premiere of Joanna Murray-Smith’s The Female of the Species serves as a rollicking, uproarious season premiere for Canonsburg’s Little Lake Theatre Co. A fanatical student has chained a noted feminist writer to her desk —  but darn it, people just keep interrupting. They’re calling it an evening of “farce, feminism and fun,” and in the hands of the always-reliable Little Lake, you can be sure they’ll deliver. There are only three weekends of performances, so get your tickets now!

Bricolage's Essential Dutchman
The uncanny, incisive one-act play Dutchman is a theatrical atomic bomb. The work somehow seems to have only grown in relevancy and power since LeRoi Jones (aka Amiri Baraka) wrote it in the early 1960s; while that’s a testament to the immortality of the piece, it can also be seen as a sad commentary on the dialogue (or lack thereof) about race in America. So leave it to the unstoppable Bricolage Production Co., then, to not only present a pitch-perfect performance of Dutchman, but to open up that dialogue immediately after the lights dim. Get a review of an unforgettable evening at the theater in this week’s edition of After Dark.

In Theaters: The giant unstoppable juggernaut of a superhero movie, The Avengers, hits American theaters this weekend, and everything else is getting out of the way. No other wide releases are debuting Friday, allowing Avengers to go ahead and take everybody’s money unopposed; particularly defiant moviegoers can, however, seek out the indie college comedy Damsels in Distress at Cinemagic Manor or Boy, a family dramedy out of New Zealand, at the Harris. PM Film Editor Sean Collier will appear on the 102.5 WDVE Morning Show Friday at 7:15 a.m. to review The Avengers — although, given the fact that everyone with a pulse has already bought a ticket, he recognizes that reviewing the film is something of a fool’s errand. Still, tune in to 102.5-FM or DVE.com for Sean’s review!

Check out Pittsburgh native and blues-rock standout Melinda in an early show at Club Cafe this Saturday! She’ll be joined by her backing band, The Special Guests, to perform songs from her new EP, Don’t be Sweet. Tickets are only $8! Head to clubcafelive.com for info.

The Child Health Association of Sewickley presents the 35th House Tour, featuring six magnificent homes, all open to the public, to benefit the children of the western Pennsylvania.  The tour runs on May 4th and 5th from 9:00 am-4:00 pm, and Friday evening from 6:00pm – 9:00pm. Click here for more.

On Sunday, cheer on runners in the Dick's Sporting Goods Pittsburgh Marathon. Be sure to support participants as they trot through town to finish 13.1 or 26.2 miles! Click here for route information.

This article appears in the May 2012 issue of PMWeekend.
Categories: Things To Do