Coworking Gets Down to Business in Pittsburgh

Sharing a workspace becomes more than just a place to plug in a laptop for entrepreneurs seeking an environment where they interact and help others. 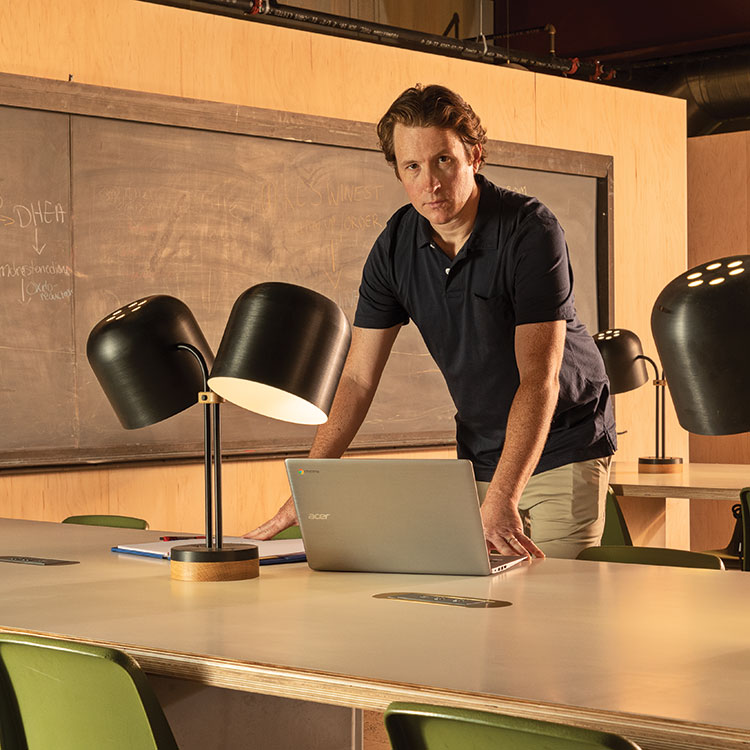 Frank McNally remembers when he was launching Movemints, which makes mints to use with dental aligners that can leave a bad taste in your mouth, and he and his co-founders tried to hold business meetings at each other’s homes. As it does for most fledgling companies, having limited space to work got old quickly.

“We got sick of working off of each other’s kitchen tables,” he recalls. “We would have to coordinate with our wives, to say, ‘Hey, when is a good time to have some people over for a meeting?’”

Three years ago he got coworking space at Beauty Shoppe in East Liberty, and McNally says it made all the difference for him and for the company — and it wasn’t just because they finally had space to work.

“I have a full-time job like a lot of entrepreneurs, and I was able to meet people who were able to help me with staffing and other things I needed,” he says of his fellow co-workers.

“And when I’m at Beauty Shoppe, I have this degree of energy I just don’t get when I work from home. I don’t go every day, but I go when I need to focus and get out into the world and out of my sweatpants.”

The typical image of a person who uses a coworking space is the post-incubator tech startup founder with few resources. As Pittsburgh’s tech presence continues to grow, there’s no question demand for work space from this kind of worker will grow as well. But local coworking spaces have realized the way to differentiate themselves from big coworking chains is to offer clients more than just a desk to sit at and a socket to plug in a laptop. It’s all about creating an ecosystem.

Zachary Ciccone, co-founder of Beauty Shoppe, says they think of themselves as a hospitality company rather than a work space. (He also doesn’t love the term “coworking” because he thinks it’s not quite accurate).

“I would say when we first started, we were focused on the historical coworking audience of startups and solo entrepreneurs — the ‘first adopter’ class,” he says. As the company matured, however, Ciccone says they came to realize that coworkers, just like those in traditional 9-to-5 jobs, were in search of personal fulfillment in their work.

“We believe you have to cater to the individual all through the evolution of their professional life,” he says. “Beauty Shoppe is not just an urban, avant garde coworking environment. Our makeup is very different than the WeWorks or the Industriouses.” Those chains serve large, national enterprises, he notes. “Our brand is local: for Pittsburghers who want more than an inspiring place to work. The majority of our companies interact with each other and help each other.”

For McNally and Movemints, having flexible terms for their lease turned out to be a huge plus. “They understand the pressures startups are going through,” he says of Beauty Shoppe. “When we needed to turn off our membership for a while to give ourselves a little more financial runway, we were able to do that. They really helped us solve a lot of our early problems.” 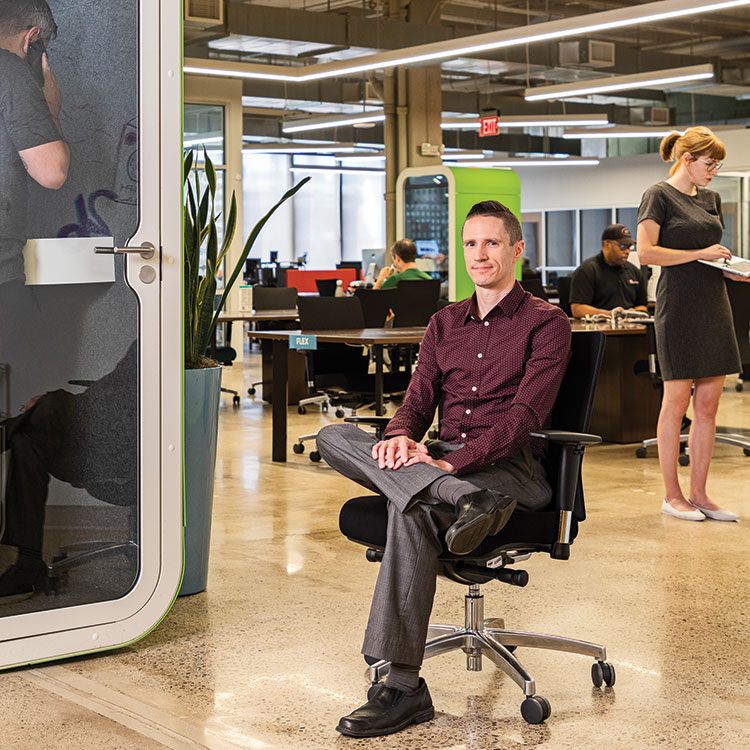 At Alloy26 on the North Side, there isn’t one “typical” type of coworker, says Christine Lomago, the coworking space’s business development and relationship manager.

“We have a lot of people who are consultants who can’t afford dedicated office space, some who have downsized, some who work for companies that are switching up their work-from-home-policies,” she says.

“It’s the ease of the lease terms for different-sized companies,” that attracts many of them to Alloy26,” adds Dan Knopp, Alloy26’s marketing manager. In addition to its location in Nova Place, Alloy26 opened a second location on Isabella Street in the North Side.

Alloy26 actively works to connect its members with each other, from Slack channels to member engagement events. But much of the interaction among companies has happened organically, Lomago adds, as startups discover others going through and struggling with the same issues. 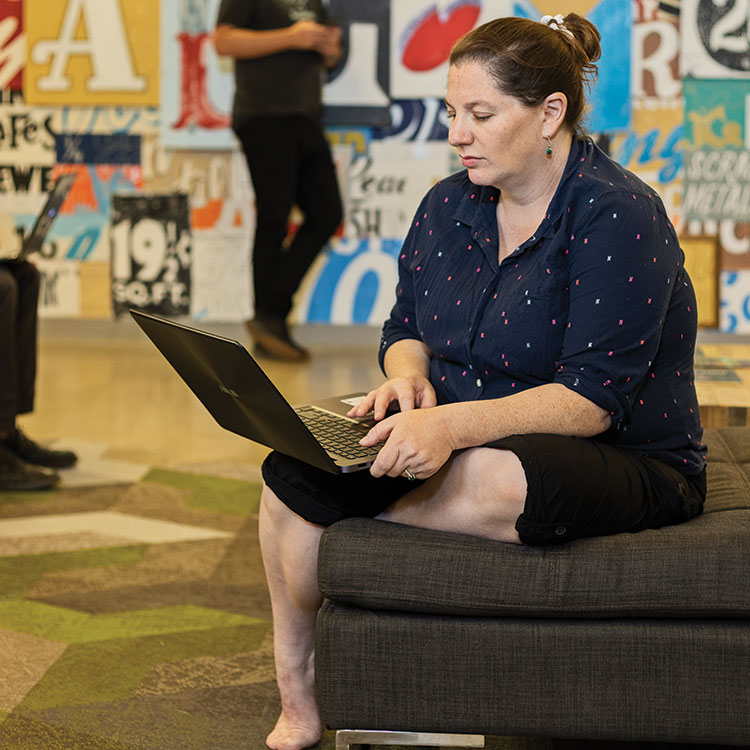 For her two-person public relations company TechStarts PR, Deborah Eisen­berg says having a space at Alloy26 to hold meetings is key. And the ecosystem at Alloy26, as well as the nearby Innovation Works offices at Nova Place, has provided access to startup clients. “I’ve worked in other cities, but the connections we’ve been able to make here are so valuable,” she says. “We love being able to be part of a community of companies that you get to know and trust.”

“We consider ourselves part of a larger community of people who want to do good work in Pittsburgh,” Lomago says.

When it opened in 2011, Beauty Shoppe was the first of its kind: an independent Pittsburgh coworking space. Now, Pittsburgh is home to several national coworking chains, including Regus and Industrious, and perhaps the best-known national space, WeWork, is reportedly eyeing space in the U.S. Steel Tower.

Since most large chains offer reciprocity of services at locations in multiple cities, these are attractive options for the business person who travels a lot and needs a place to meet clients in a city they’re not usually in, or a space to work between flights that’s a bit more inviting than an airport lounge.

Pittsburgh has a plethora of local coworking spaces, however, each with its own offerings, including Work Hard in Allentown, which has been around since 2013 and also serves as an incubator; the coworking/gaming lounge Looking for Group in Brookline; Catapult and the Global Switchboard, both in Lawrenceville; The XFactory, which includes a tech shop geared toward makers; and Avenu, which is a combination of the former StartUptown and Revv Oakland spaces.

While it’s still tricky to try to track how many coworking spaces are in a given city, since not all are zoned the same, real estate services firm JLL found that since 2010, so-called “flexible” office space has grown at an average annual rate of 23 percent.

“No segment of the market has demonstrated more overall growth than the coworking industry,” according to JLL’s report. “Given the massive amount of venture capital that’s being poured into the sector, this aggressive growth rate shows no signs of slowing.” And according to the Bureau of Labor Statistics, the number of freelance or independent contractors will increase to 40 percent of the American workforce by 2020.

JLL found that coworking is still only a fraction of commercial real estate: Spaces that provided temporary and short-term office space accounted for about 5 percent of the total U.S. office market. But, the report found, demand for coworking space is only expected to increase as freelance work and the gig economy continue to expand. By 2030, JLL predicts, 30 percent of office space will fall into the flexible category.

“Pittsburgh has attracted some prominent outside players, and that’s a good sign for the trajectory of our local economy,” says Ciccone of Beauty Shoppe. “But we don’t want to do what they do, we want to serve local individuals growing a brand who are looking to do business with one another.”

Beauty Shoppe, which also has locations in Cleveland and Detroit, operates seven coworking locations in the Pittsburgh area, including a collaborative space with Penn State in New Kensington. “We see it serving as a catalyst for economic development there,” Ciccone says. “To us, coworking is not a product. We see great potential in Pittsburghers, in keeping people happy in their workplace and adding economic growth and social vibrancy to the Pittsburgh community.”

This article appears in the September 2019 issue of Pittsburgh Magazine.
Categories: Business, From the Magazine, Hot Reads

Our Dining Critic Dishes About in Amazing Breakfast Sandwich