The state-sponsored program looks to add $75 million in traffic-signal upgrades throughout the city. 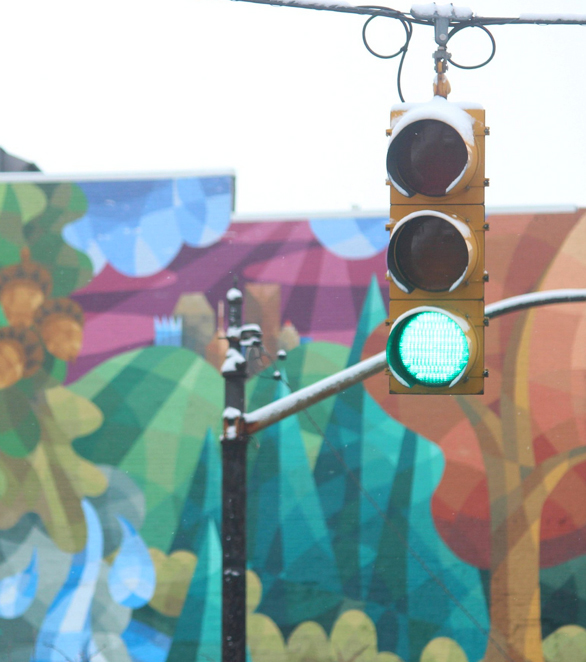 On Oct. 8, it was announced that Pennsylvania will set aside as much as $75 million for updates to regional traffic signals, some of which haven’t been touched since the '50s.

The program, called “Green Light-Go,” will involve a host of upgrades, including new LED lights and the removal of unnecessary signals. It will aim to lessen the amount of time people spend at red lights throughout the city, reducing delays up to 30 percent. (Get the full story over at the Pittsburgh Post-Gazette.)

With signal improvements on the horizon, it seems Green Light-Go has the potential to eliminate the "Pittsburgh Left." To some, the illegal traffic maneuver is as logical as being able to turn right on red; to others, it’s an absurd move that puts everyone in danger. It has its own Wikipedia page, where it's described as “the driving practice of the first left-turning vehicle taking precedence over vehicles going straight through an intersection.” Everyone who's picked up, and read, a driver’s manual knows that those "turning left must yield to oncoming vehicles going straight ahead." So why do we continue to disobey the rules of the road?

Though he doesn't know why or when this practice originated, Kenneth Kotovsky, a professor and director of the undergraduate program in psychology at Carnegie Mellon University, has a theory: “The conjecture is that [Pittsburgh] is somewhat high on communal values, so this kind of cooperation was possibly a bit more likely to evolve here.”

We live in a city designed before the advent of the automobile — meaning most streets, especially downtown, are congested, with little room for left turn signals. Kotovsky's theory seems to argue that the Pittsburgh Left is inevitable as a result of the city’s topography and culture — collection of tight-knit neighborhoods spread out over hills and valleys, with denizens who want traffic to move smoothly in both directions at intersections where traffic signals may not help with forward progression.

Hopefully with these new traffic upgrades, all of this talk of illegal traffic maneuvers will be a thing of the past.

#Causes: Donate in the name of the Steelers to support the food bank

Taste of the NFL’s Kick Hunger Challenge is a national online fundraiser that allows NFL fans to see which team can raise the most money for food banks across the country. From now till the end of football season, you can give a donation in the name of your favorite NFL team (Steelers, obviously). Proceeds raised through the Steelers will go directly to the Greater Pittsburgh Community Food Bank. Donate online here.