Coughlin's Law Wants To Be Your Mount Washington Destination

Notes on the busy new bar and restaurant near Grandview Avenue. 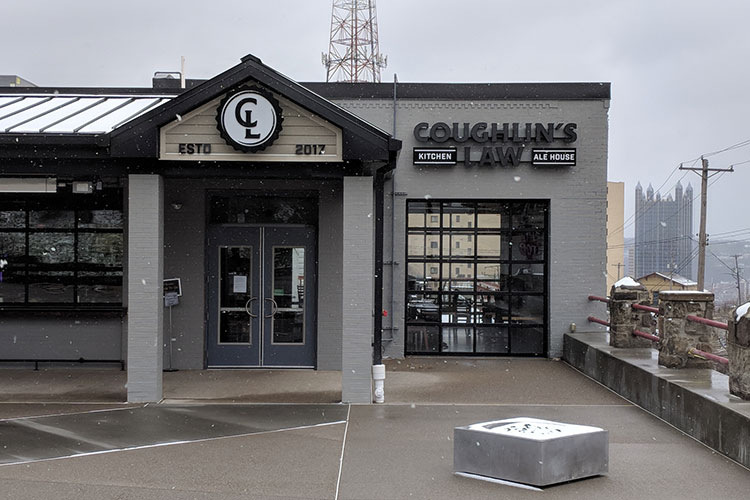 Were it not for its topography, the neighborhood close to Downtown would be an old-school, working-class yinzer haven. Across its acreage, Mount Washington is marked primarily by old houses and humble bars. Its legacy as a home base for laborers working in riverfront factories gives it a permanent and definable Steel City heritage; a relative lack of modern redevelopment leaves it as an affordable area even in the 21st century.

It also has some of the most breathtaking views of an urban area in the country. So that changes things.

At all hours, day and night, Grandview Avenue is visited by locals and tourists angling for views and selfies of the city and region beyond. The two remaining inclines are perennially popular attractions for visitors (even if one of them is still used, somewhat sparingly, as public transportation).

If the neighborhood wants to further develop as a commercial and recreational center, however, there’s a problem: It’s laid out all wrong. The most popular stretch of Grandview, near the Monongahela Incline, is a residential area with nary a bar or restaurant. The area around the Duquesne Incline does have a commercial stretch, and there is certainly drinking and dining to be done there, though the area is much less trafficked than the other end of the road.

In fits and starts, growth and activity in the neighborhood has thus centered around Shiloh Street, stretching away from the Mon Incline at Grandview. Old-school bars remain, but more modern establishments have joined them.

The latest — which isn’t actually on Shiloh proper, but around the corner on Virginia Avenue — is Coughlin’s Law, a nascent bar and gastropub which held a grand opening last week. The bar, named after the movie “Cocktail,” fortuitously opened its doors just as the weather turned (temporarily) warm, leading to overflowing crowds throughout its first weekend. (This also led to a hopeless parking situation; there is nearly no available parking within a block of the business. Apparently there are plans in place to alleviate the lack of spots, but I can’t imagine what they would be. I’d take a Lyft.)

Unable to get in throughout the first few days of operation, I finally made it around dinnertime on Wednesday. Once again, the place was fairly well packed; the crowds had gathered to watch the Penguins game, and the bar staff was slammed but good-natured amid the chaos. My first impression, after hunting for the one open seat at the bar: This place is loud. East Carson loud. In fact, the general vibe at Coughlin's Law is not dissimilar from that at a busy South Side hangout; it is as if a bar from the Flats flung itself up the mountain, settling on an awkward precipice and putting down roots.

I also noticed, with an admitted degree of personal discomfort, that I was almost certainly the oldest patron in the place. (I'm 33; it's not a feeling I'm used to, outside of my too-frequent visits to Hot Topic.) The noise level and age bracket may deter you, or you may not; just know going in that this is not a place for a quiet conversation, by any stretch.

I ordered a signature cocktail, in this case a whiskey-and-Grand-Marnier creation dubbed Kind of a Red Eye, and the restaurant's flagship offering, the Coughlin Burger. The drink, smart but a bit sweet, tasted tame but packed a wallop. The burger was the highlight of my visit, in more ways than one; it was brought to me underneath a mysterious glass dome, shrouded in smoke. After my server set it down, she removed the dome with a flourish; fragrant smoke wafted out in a circle, giving my burger an entrance befitting a member of Spinal Tap. Several nearby patrons responded with an impressed "Oooohhh," as if they had just witnessed an unexpected escalation in a fireworks show.

(The burger was pretty good, too. The taste was all there, even if the construction was a bit haphazard; I ended up going to my fork. Still, I was full and happy.)

The service was attentive and helpful despite the chaos, and the extra effort — including theatrical burger presentation — suggested that this is a bar that is trying very hard. If you want to be a curmudgeon, you could certainly say that they're trying too hard, but I'll take it over the alternative. Particularly with younger-skewing bars in Pittsburgh, the problem is a lack of effort, not an abundance; I would much rather have a place like Coughlin's Law thinking big than not thinking at all, like too many of its brethren.

I probably won't visit Coughlin's Law during high-traffic times; I'm not often looking for the accompanying din. I will, however, be back when I can grab a seat at one of two outdoor areas and look over the city with a drink and a snack. There are rough edges here, but they clearly want to work them out.

This article appears in the April 2018 issue of After Dark.
Categories: After Dark