Delicate and sweet with a refreshing crunch, the cucumber is an ideal food for hot and humid summer days. 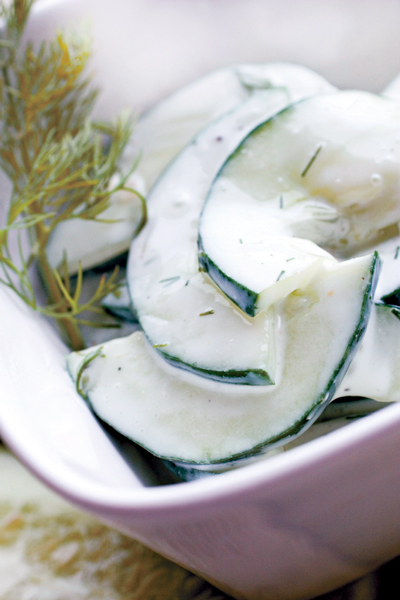 Cucumbers are the garden’s answer to summer heat. They make flavorful additions to salads and sandwiches, and pair beautifully with tropical fruit such as pineapple or mango in a cooling salsa. So it’s great timing being able to find locally grown “cukes” at farmers’ markets starting this month.

One of the oldest cultivated vegetables, cucumis sativus has been grown for many thousands of years. Botanists believe it originated near the border between Thailand and Burma, where the earliest known cucumber was found and dated to 6000 B.C. Cucumbers were known and eaten in ancient Mesopotamia and in medieval Europe. The first plant arrived in the New World in 1494 with Christopher Columbus, and cultivation quickly spread. Cukes’ cool, thirst-quenching quality has always been prized; a menu from a royal Italian banquet held in 1529 reveals that cucumbers were served alongside sweetened almonds, fruits and confections as a refreshing conclusion to a nine-course meal.

Today, we’re more likely to dress cucumbers in savory, piquant sauces of vinegar or sour cream than to serve them with sweets. However you slice it, though, the cucumber offers a bracing crunch that is its most alluring quality. This is partly because, similar to other members of the cucurbit family, which includes winter squash and melons, cucumbers have a very high water content of 95 percent. The fact that we usually eat cucumbers in their simplest state—uncooked—hardly translates to culinary monotony. Recipes from around the world offer all manner of tempting interpretations.

From delicious side dishes such as Indian raita, Greek tzatziki or cacik, a popular Turkish dish that combines them with creamy yogurt, garlic and mint, cucumbers pair well with all manner of savory ingredients. In England, cucumber sandwiches are a tea-time staple. French cuisine includes cucumber soup, and in Asian cuisine, cucumbers show up everywhere from vinegar-sprinkled salads to fresh spring rolls. About two-thirds of the world’s cucumber crop is eaten fresh (the remainder is used for making pickles). There are more than 100 different varieties, and through local growers, you may be able to sample intriguing, less-common varieties such as lemon cucumber. Yet even the most humble pickling cucumber is a summer treasure—one worth seeking out now before the season concludes.

This cool, classic salad (pictured above) is always a hit alongside barbecue or other spicy foods. Use locally grown cucumbers that haven’t been treated with a waxy coating or thin-skinned hothouse (English) cucumbers, and you won’t have to spend time peeling.

Halve and thinly slice 1 pound of cucumber. In a medium bowl, combine 1/2 cup reduced-fat sour cream, 2 tablespoons freshly squeezed lemon juice and 2 tablespoons freshly chopped dill. Whisk together ingredients with a fork to combine and season to taste with coarse salt and freshly ground pepper. Add cucumbers and toss gently. Cover and refrigerate for up to 4 hours, or serve immediately.

How to Select and Store Cucumbers

Look for specimens with healthy, brightly colored skin. They should be very firm without wrinkles or blemishes. Avoid those that feel soft or have a dull-yellow cast (this means they are too mature and may contain lots of hard seeds). Because cucumbers are mostly water, they don’t store well; eat them right away, or store in the refrigerator for no longer than two or three days. Because they dehydrate so quickly, avoid leaving them out at room temperature for any extended period. To store the remainder of a cucumber, wrap it tightly in plastic so it doesn’t dry out.