PittGirl proves that Pittsburgh is the true home of the Wedding Cookie Table. 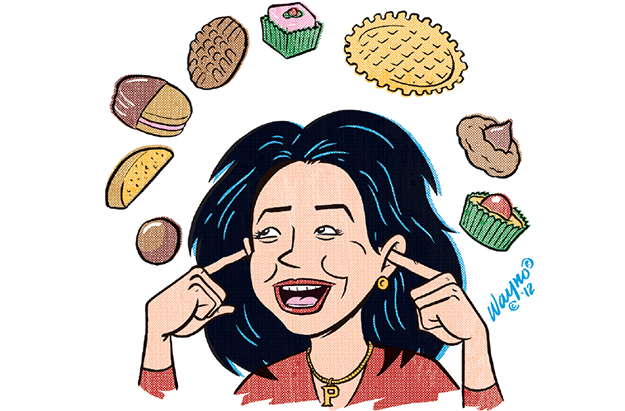 Despite stiff competition from the parking chair, the basement potty and sandwiches loaded with french fries, the wedding cookie table might be my favorite Pittsburgh tradition.

And like all things Pittsburgh, there’s debate as to whether we as a city can really lay claim to it. There are parking chairs spotted in Chicago. A sandwich with fries in Detroit. A house (or 20) in Cincinnati with a toilet occupying a dungeon-like basement where centipedes hold late-night raves.

And yes, you’ll attend receptions in other parts of the country where you’ll find yourself piling tiny plate after tiny plate with everything from Buckeyes to nut cups to a seven-layer bar that magically has eight layers.

But, right here and now, let’s officially take claim to the wedding cookie table like the settlers of the Wild West. Let’s stick our flag in it, and then let’s chase away the riffraff that loitered about — and as soon as someone else tries to lay claim to what’s rightfully ours, we’ll stick our fingers in our ears, close our eyes and shout, “We can’t hear you!”

But if you do find yourself in the Great Cookie Table Debate, trying to convince a friend or foe that Pittsburgh is the home of the cookie table tradition, here’s ammunition:

No. 1: Wikipedia. The Internet Bible of Truthiness and Indisputable Facts (what?) says the wedding cookie table originated in Southwestern Pennsylvania by early European immigrants like the Italians and Greeks.

This makes sense because those groups settled here in much larger numbers than they did in Philadelphia or other non-industrial towns to our east. Philadelphia was full of sissies in powder wigs sipping tea and spouting law theory while Pittsburgh was full of hard-working down-to-earth grandmas in babushkas baking perfect cookies while their men worked sweaty, manly jobs.

I just pulled those “facts” out of thin air, but that doesn’t mean someone couldn’t add it to Wikipedia’s article on the cookie table and use this column as the citation. *wink*

No.2: The internet. Outside of Wikipedia lies the rest of the internet, and there, just about any search for “wedding cookie table” will land you on an article published by a Pittsburgher about their experiences — or at least an article in which Pittsburgh receives an early mention as the home of the tradition.

And lucky for us, everything on the internet is true.

No. 3: Their “idea” is our childhood. You’ll find that most recipe or wedding-planning sites discussing cookie tables are ripe with comments from readers who say they were recently introduced to the “idea” of a cookie table at weddings.

They’re calling the tradition you and I have been enjoying for years a mere idea. Tables filled with cookies, of which we’ll eat six plates and then take home two boxes that will be gone by the next morning. Memories of your parents coming home from a no-kids-allowed wedding with a box full of delicious treats of every shape and flavor — that’s just an idea to the rest of the country. They don’t have memories like we do of our mom letting us eat leftovers for breakfast. “Just drink a big glass of milk to offset the sugar,” is what my mom said about an hour before the sugar shock set in.

We’ve loved it and lived it, and we will badmouth the bride for weeks after attending a reception without cookies. Meanwhile, the rest of America is just now warming up to the idea.

As with any debate, it’s wise for you to know what ammunition your opponent might have chambered in his virtual debate gun. Here’s the lone bullet: The Arms Family museum of Youngstown, Ohio, has asserted that it is the actual American birthplace of the cookie table, while acknowledging that Southwestern Pennsylvania was an early “dominant area” of the tradition. Back in 2004, the museum even had an exhibit called “Mahoning Valley Weddings: Romance, Ritual and the Cookie Table.”

Now, we can do two things with this possibly damaging bullet to our assertion we’ve officially staked here today:

1. Acknowledge it and share the tradition’s history with Youngstown, Ohio.
2. “La-La-La-La, we can’t hear you!”

I’d discuss this issue further with you, but I can’t hear you with my fingers in my ears.

This article appears in the December 2012 issue of Pittsburgh Magazine.
Categories: From the Magazine, Hot Reads, PittGirl