Conor Lamb Doesn't Want to Know How You Voted for President

The new congressman discusses his upset victory –– and his thoughts on the state of the Democratic Party in 2018. 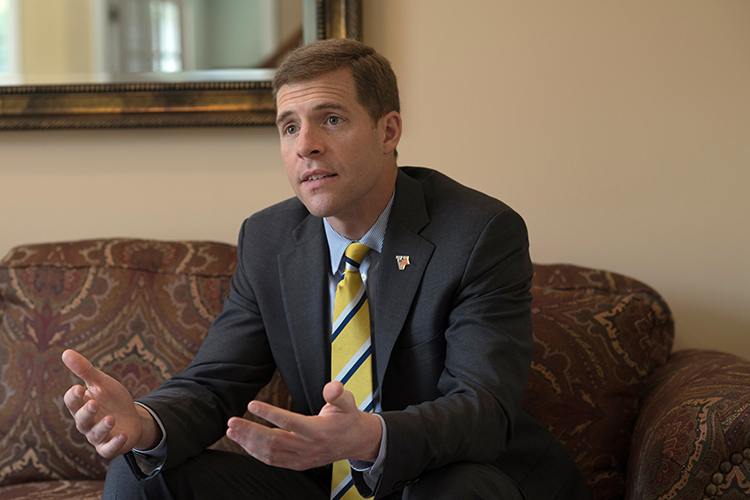 Pennsylvania’s 18th district, recently redrawn as part of the state’s new electoral map, wasn’t usually a hotbed of political intrigue. Republican representative Tim Murphy ran unopposed in 2014 and 2016; in the six contests prior to that, he triumphed handily.

But the former congressman’s scandal-plagued exit from the House of Representatives drew scrutiny to the special election that was called to find his replacement. The GOP sought to preserve a long-held slice of the state, stretching from Pittsburgh’s southern suburbs toward West Virginia; the Democratic party sought to flip the district and tally another win in advance of this year’s midterms.

Conor Lamb, the 34-year-old Democrat from Mt. Lebanon, needed every vote he received to make it to Washington, D.C.; less than 800 votes separated Lamb and his better-funded (and Trump-endorsed) opponent, Rick Saccone.

Thanks to the aforementioned redistricting, Lamb is now running another race, against Republican incumbant Keith Rothfus (whose own 12th district was also redrawn) in the new 17th. He seems unrattled by the back-to-back stumping, however; in a conversation with Pittsburgh Magazine, Lamb discussed the benefits of visiting the doorsteps of the South Hills and the mindset of southwestern Pennsylvanians (before throwing in his own Best of the ’Burgh picks).

PM: You won a hard-fought election for the right to immediately begin fighting to win another. Has that been a source of frustration — not being able to commit fully to legislating just yet?
CL: No, it hasn’t. I think the two go hand in hand; I learn things from the constituents who need services or advocacy from us now that I think make me a better legislator and campaigner … It helps people understand what I’m really doing every day. That’s my goal.

PM: To what degree do you think that was a race about you and Rick Saccone, and to what degree do you think it was about Donald Trump and the broader political landscape?
CL: I think it was almost completely about the 18th District. Time and again, reporters would come in from outside of the Pittsburgh area and ask me about the president. I even went around with one reporter door-to-door; he started asking everybody whose door we knocked on whether they voted for the president or for Secretary Clinton in 2016. It was striking to me because I never once did that. I thought it was kind of impolite — and I don’t think people wanted to [talk] about it. They wanted to talk about the problems we actually have: What do you think about this tax bill? Where are jobs going to come from? Why does healthcare get more expensive every year? Are you going to protect my Social Security or not?

PM: What was on the minds of voters who had presumably voted Republican for years but were undecided this time around? What was motivating those voters?
CL: I think economics, especially for older people. It’s a very elderly district. The threats to cut Social Security and Medicare are devastating; they’re unfair. We made a promise, as a country, that we’re going to uphold these programs. We didn’t have to add a trillion-and-a-half dollars to our debt last December with this tax bill. If you’re a Republican, one of the things you used to stand for was fiscal responsibility; many of the people still do … That just happened to fit our message a bit more, because we were saying, “We’re going to uphold these programs, no questions asked. We’re going to do what it takes to get that done.” 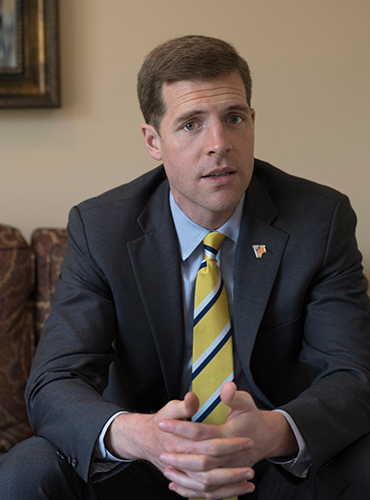 PM: You seem to be willing to vote for Republican-sponsored legislation if it’s legislation that you believe in; you recently supported one GOP-authored banking regulation bill and opposed another. We’re in an era where many votes proceed along party lines; is that not the way you’re coming into Washington?
CL: No, that’s not the way I look at things — and I also don’t think it’s what people actually want … I think, in this district, we have a mix of perspectives and points of view; there will be some issues that the Republicans tend to favor that are better for our people here. One is natural gas drilling, all the jobs that it has created and the things it has done for our economy. Republicans overwhelmingly have been the ones that have supported that, more often than Democrats. I think if you care about representing this district, you stick up for those policies. Banking regulation is another one; I think that we do have community banks here in the district that could use some help and relief from the regulations, especially down in Washington and Greene counties. On that issue alone, I was willing to go along with my Republican colleagues. But when they tried to then take what was good for the community banks and wrap it up in what was basically a giveaway to really large banks that were going to do risky things with all of our money — that’s where you draw the line.

PM: There’s a lot of consternation within the Democratic party over how to proceed with the midterms and beyond — whether to turn to the very progressive wing, as we saw recently with Summer Lee and Sara Innamorato’s victories, or go toward the center and try to reclaim some of the working-class voters you’ve talked about. Is your success an indicator of which way the party should go, or is it specific to the 18th?
CL: I think the story is that we are succeeding in different ways in different places, and we are building a coalition that’s actually capable of governing. If you look at the history — at least in the 20th century — where Democrats have done well and actually gotten results for their citizens and passed bills, it has been a coalition of different types of people. It’s been Martin Luther King on stage with Bobby Kennedy on stage with the heads of the unions … That’s what we’re trying to get back to. The media wants to keep carving it off as the center versus the left, but that’s just not what it is. We’re figuring out where we overlap.

PM: When you do talk to more progressive constituents who are concerned about where you fall on topics such as natural gas or gun control, how do you address their concerns?
CL: The first thing I do is listen. I don’t pretend to think that I know everything or I already have the answers. Sometimes different groups are able to educate me on an issue. I always listen. Then I try to figure out where we overlap … Maybe they want a ban on a specific type of firearm. We might be able to talk about how I don’t necessarily support that, but if the goal is to keep that gun and all other guns out of the hands of criminals, let’s take a look at this background check bill that I just co-sponsored and see how it would effectively do the same thing. Neither of us necessarily walks away having gotten the whole pie, but we both got something — and probably learned something about each other along the way.

PM: As someone who campaigned as a supporter of second-amendment rights, how have the past couple of years — especially the number of school shootings — affected the way that you think about those issues?
CL: I think for me, the real lesson of the past few months on this issue has been that we finally have a chance for average people to stand up and push back against the way the NRA has completely distorted this entire debate. For a long time, virtually no new gun legislation was ever even considered; the NRA had basically bought and paid for politicians, mostly on the right, but on both sides, [and] made it impossible for them to ever do anything new on gun policy. That is finally changing because people are organizing together … While there may be intricacies of gun policy that we disagree on, the overall issue of who should be deciding this — the people and not the gun lobby — is something that we are finally making some headway on.

PM: Finally, this happens to be our Best of the ’Burgh issue. What should be a Best of the ’Burgh honoree from your perspective?
CL: I would definitely give the best pub, nightlife place [award] to Riley’s Pour House in Carnegie. My uncle Jim has been playing Irish music there since the early ’80s; I’ve been going there since I was 3 or 4 years old. Who knows if I was actually allowed to … I’m a big fan of the Montour Trail; I think that one gets overlooked because people know about the ones along the river. The Montour Trail is great. Hopefully, someday, we can connect all of those.

This article appears in the July 2018 issue of Pittsburgh Magazine.
Categories: Community Feature, From the Magazine