Pittsburgh Port Authority is debuting a new way to ride the bus. PM Editorial Intern Ollie Gratzinger scored one of the first ConnectBands and reports the technology is a success. 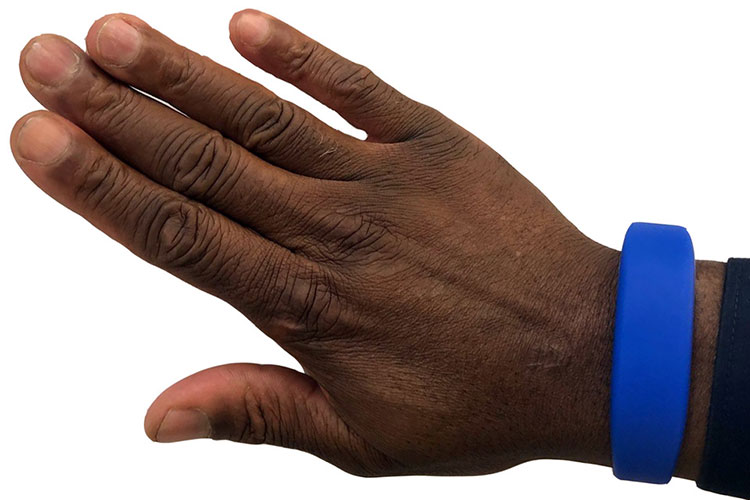 At 7:30 a.m. on Thursday, June 20, the Service Center on Smithfield St. opened its doors. Inside, awaiting distribution, were 200 ConnectBands — wearable ConnectCards wrapped up in a blue silicone bracelet. It was a first-come-first-served offer; before the clock struck noon, the lucky 200 had come and gone.

I arrived at 8:30. The queue wasn’t as absurd as I’d expected; social media reported that more than half of the bands had been given out in the first 45 minutes, but the flow seemed to slow down as time ticked on. There were only a dozen or so people patiently waiting in front of me, while a friendly Port Authority worker guided the line and answered questions about the product.

Getting the bracelet was easy. I stepped up and was asked for some basic information — name, phone number, email and a few security questions. (After the trial period, which ends on Sept. 1, a survey will be sent out to everyone who tested the ConnectBand; I assume that’s why they needed to know my info.) A worker handed me a blue bracelet, asked me to sign a piece of paper and informed me that $10 was pre-loaded onto my ConnectBand, which worked just like a ConnectCard, he said.

I’ve been taking the bus in Pittsburgh for 10 years. I remember the days of multiple fare zones, paper transfers and monthly bus passes made of shiny, multicolored paper. I’ve seen a number of iterations — and so far, I prefer the ConnectBand to anything else I’ve used to pay my fare. It’s fast, it’s easy and it’s efficient. It taps against the orange platform just like the card, and I don’t have to rummage through my backpack for my wallet, keep a card tucked into my pocket or — God forbid — fumble around with cash.

It loads just as easily as the ConnectCard at machines in the light rail stations, and as a person who loses things more often than I’d like to admit, I appreciate the fact that I can just put it on and call it a day.

More importantly, though, it also has the potential to drastically simplify the transit experience for folks with disabilities that impact their dexterity, or parents with children in their arms.

In terms of functionality, it’s durable, waterproof and comfortable. It stands up to the wear and tear of everyday life; I’ve worn it to wash dishes, I’ve cooked dinner in it and I’ve fallen asleep with it on a few times. It’s braved the drenching Pittsburgh rains. It’s been dropped, bumped, soaked and submerged. Still, it works just fine.

It’s a little on the large side, with a band almost twice as wide as a standard silicone bracelet and a thicker wedge that holds the actual chip. It looks a little like a small Fitbit; it can be a bit clunky, especially if it’s sharing a wrist other bracelets. To remedy this, I slipped it on my right wrist, while my watch lives on my left. It still gets caught on things sometimes because of its size, though, and I’m not crazy about the navy-blue color. Ultimately, though, those are superficial problems with a pretty darn good product.

According to Port Authority, the band will work for the summer, after which point a survey will determine its fate. I hope it’ll be received well; In an age of wearable technology, it seems like the ConnectBand has the potential to not only fit in, but to serve as the new standard.