'Comeback Season: How I Learned to Play the Game of Love' 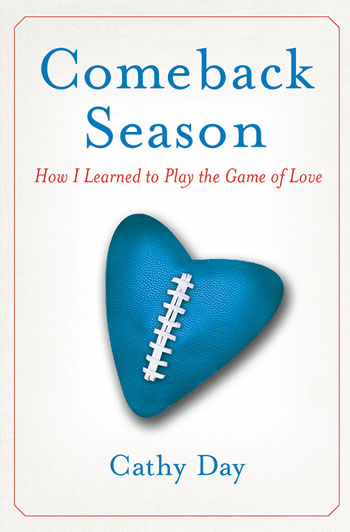 If you were living in Pittsburgh a couple of years ago, you might remember hearing the bad news that Forbes.com had given the city an abysmal rating—32nd out of 40 U.S. cities—in terms of “livability” for singles. (The worse news is that we dropped a couple of places in 2007.) It was depressing, sure, but maybe not entirely shocking for anyone who was out there trying to find Mr. or Ms. Right.

In Comeback Season, Cathy Day—English professor at University of Pittsburgh, writer, Indiana native, Colts fan, 37-year-old single woman in Pittsburgh—tells the story of a year in which she tried really hard to find love, drawing inspiration from her team. You may remember that the Colts ended the 2005 season—Day’s first year living in Pittsburgh—with a loss to the Steelers in the playoffs. Figuring that if Peyton Manning and his team could shake off the loss and try again the next year, she could, too, Day set out to have the perfect season in 2006. She wasn’t playing just for fun or for the love of the game; she was playing to win. To settle down, to find her family.

The problem with this plan, of course, is that you can’t plan for the perfect season; in fact, even thinking you might have the perfect season could jinx you—though, of course, negative thoughts will destroy you, too. It’s a tough balance to maintain. Watching the pre-game commentary before the first pre-season game, Day realizes, “It’s only Aug. 10, and the Colts haven’t yet kicked off, and already [everyone is] saying, ‘What about January? Can they come through in the playoffs?’ If you’re a Colts player, if you’re a single woman, how do you keep from thinking that far down the road every time you take the field?”

But, like Peyton Manning, Day tries to take it week by week, play by play. She puts down roots, quits smoking, buys a house, lets friends introduce her to other singles, ventures into the world of online dating, meets virtual strangers for coffee. Some weeks, she wins: She goes on a good date, exchanges promising e-mails with a man who seems perfect. Other weeks bring setbacks: The man who seems perfect suddenly stops e-mailing; a matchmaking service she pays a significant sum of money to turns out to be a scam.

And, as it turns out, football and love (or at least looking for love) have more in common than you might think. Though Day occasionally stretches a bit to make the frame fit, on the whole the story of the Colts’ season is a great foil for the author’s adventures in dating. Imaginary sideline interviews—“Cathy, let’s talk about the events leading up to Valentine’s Day 2005. The communication with Bob didn’t end, am I right?”—during which Day dissects the action on the field and reflects on her strategy are especially fun. Humor (occasionally of the gallows variety) throughout the book leavens what might have been a pretty depressing story—because it turns out Forbes.com was onto something with those rankings.

By the end, even if you can’t bring yourself to root for the Colts—Spoiler alert! They win the Super Bowl—it’s nearly impossible not to cheer for Cathy. After all, she played as hard as Peyton, and he got his ring. Why shouldn’t she get hers?

Comeback Season: How I Learned to Play the Game of Love by Cathy Day; Free Press; $24