Color Me This: Choosing PPG Paints Color of the Year

Go behind the scenes as the experts at PPG Paints dissect the trends, discuss hues and pick the colors you’ll be seeing everywhere in 2018. 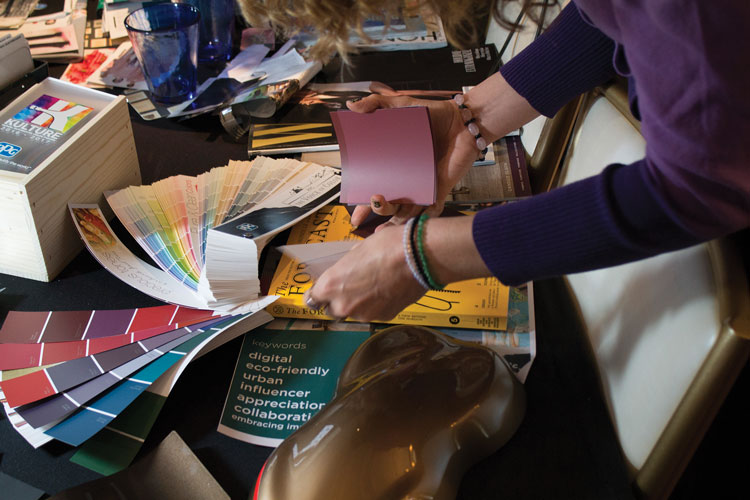 There’s a well-known scene in “The Devil Wears Prada” in which a frenzied assistant asks Runway magazine power editor Miranda Priestly (played to icy perfection by Meryl Streep) to decide between two seemingly similar azure-colored belts for a photo shoot.

Miranda’s personal assistant, the style-challenged aspiring journalist Andy Sachs (played by Anne Hathaway), lets out a giggle of disbelief and — to the horror of those in the room — naively refers to the items as just “stuff.”

Well. This leads Miranda to school Andy on the major role fashion plays in everyday life, pointing out that even the lumpy blue sweater Andy is wearing represents millions of dollars and countless jobs. It’s not “just blue,” Miranda scornfully informs her — nor is it turquoise, nor lapis, but cerulean, a color that trickled down from an Oscar de la Renta collection to other major designers to a department store to a clearance bin where Andy would find it.

“You’re wearing a sweater that was selected for you by the people in this room, from a pile of ‘stuff,’” she says.

Choosing the color of the year at PPG Paints’ eighth annual global color summit, held in February at Hotel Monaco Downtown, is sort of like that.

Granted, there was no editrix lording over the process or relying on a well-placed withering look to send her minions cowering. Still, the palette that PPG’s color experts, consultants and marketing specialists — gathered in Pittsburgh from across the world — put together for 2018 will have no less of an impact.

The Pittsburgh-based company is the world’s leading manufacturer of paint, reporting net sales of $14.8 billion in 2016. It serves customers in the construction, consumer electronics, automotive and even aerospace industries.

The colors it predicts will trend in 2018 are the hues many of these major companies will use in their products throughout the coming years. Getting it right is important.

“It’s getting channeled out to the biggest, most powerful companies in the automotive, motorcycle [and] consumer electronics industries,” says Allison Heape, PPG’s manager of color styling for electronic materials and consumer electronics in North America. “Any of the big-name brands that you can think of, there’s a really good chance that if they have paint on their product, it’s PPG paint.”

Although the color palette, including the vaunted color of the year, was chosen during the meetup in February, the hues will be kept under wraps until June. Getting there was no small feat. Pittsburgh Magazine takes a closer look at the process. 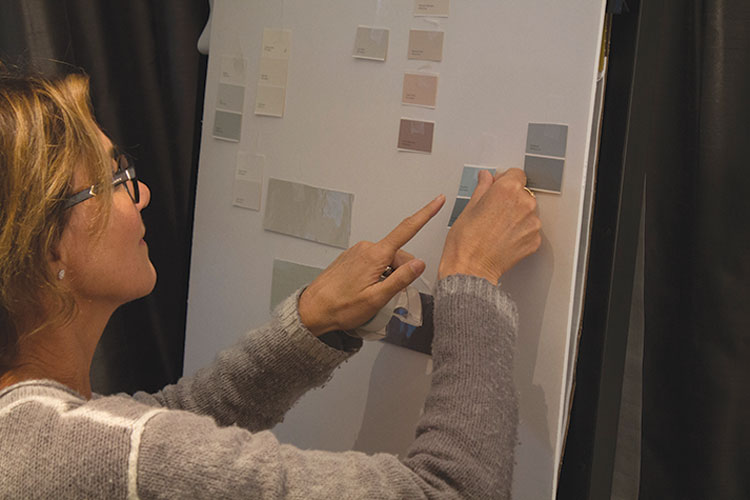 After previous stints in New York City, Miami and Paris, PPG this year held its color summit for the first time at its headquarters in the city of Pittsburgh, much to the excitement of the 20-some PPG color experts who flew from around the world to be there.

“It’s super-special,” says Heape, who works in California. “This is our heritage. This is our home base. The iconic PPG building is here. That’s our glass castle. It’s really exciting for people to be connected to it.”

Taking place during three days — the experts determine PPG’s color of the year on the last day — the meeting consists of teams from the company’s various business units diving through consumer insights, analytics, economic indicators and other factors to come up with a color palette that best represents what’s trending across the world.

The teams — which include representatives from architectural coatings, automotive and electronic consumer goods — then edit those ideas down into four trends or themes and assign colors to them accordingly. Surprisingly, those themes tend to overlap. Dee Schlotter, PPG’s senior color marketing manager, says she sees that as a result of a shrinking world made more accessible through technology.

“When we get together, we share all of this information, and what’s interesting is, even from Europe and Asia and North America, you have a lot of the same stories coming back,” she says. “So you don’t have these big divides anymore. It used to be much more of a difference between them, but that’s not the case anymore.” 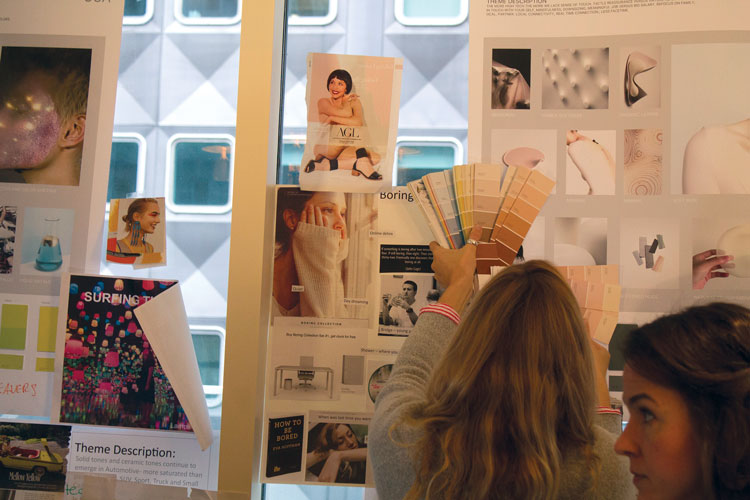 Although PPG says that the names are subject to change, the four trends that emerged for 2018 were dubbed “Boring” (or “The Space In Between”), “Earth Warrior/Protected Survivor,” “High Tribe/Escapism” and “Super Basic.” The “Boring” category (which is more about finding inner peace than blandness) resulted as a reaction to overstimulation, according to Heape.

Schlotter notes that silent retreat workshops where participants go to put down the phone and disconnect are popping up around Europe. She jokingly calls them “phone-cleanses.”

“They don’t want to be in the mix. They want to go home and hug their dog,” she says. “We’re seeing people who just want to retreat and not be so much in the mix.”

It’s no surprise that colors in this category involve whites, blacks, greys and other soft, faded colors.

“Last year we had a trend called Essence, which was soft pastels,” Schlotter says. “This year, pastels are still soft, but they’re [enhanced with more color].”

On the other end of the spectrum is Earth Warrior/Protected Survivor. Schlotter says this trend emerged from Millennials and members of Generation Z (that would be 14-to-21-year-olds) who tend to be active in society, or super-connected individuals who express themselves by attending big gatherings or festivals such as Coachella.

The colors in this category are dark greys, eggplant purples, burnt orange, camouflage greens and blacks.

Somewhat similar to Boring, Super Basic has a back-to-basics approach. This trend speaks to people who take a simplistic view of life, who recycle or upcycle, eat organic foods or who would consider scaling back to a tiny house.

“They’re saying, ‘I don’t need all this stuff,’” Schlotter says.

The last trend, High Tribe/Escapism, represents augmented reality and the digital world in which people immerse themselves. “Think about the colors they see on the computer,” Schlotter says. “We call these Dreamweaver colors. They’re very psychedelic, a little crazy.”

Schlotter says these bright colors, such as a vibrant aqua green, could end up lighting a neon sign outside of a hotel, or used as a print on a pillow or as a pop of color in the home.

“We don’t necessarily see these colors on a wall,” she says. “They would be in more textiles and accents.” 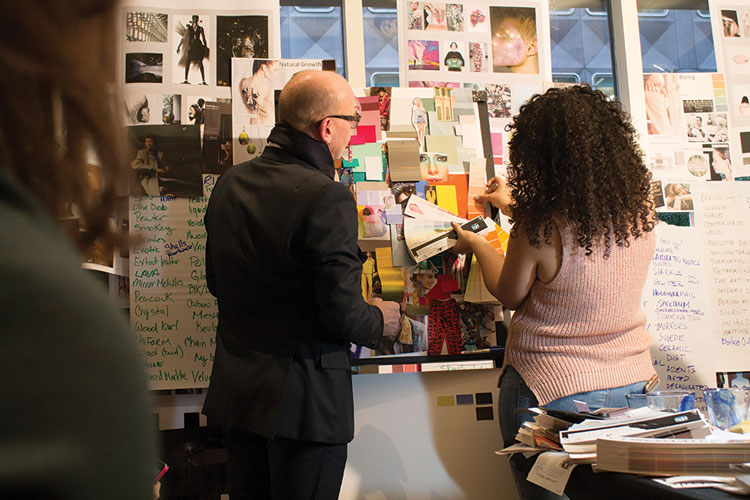 Choosing the Color of the Year

Cloistered in a suite at the Hotel Monaco, the color experts create inspirational mood boards for each theme, tacking up photos, descriptions of surfaces, materials and other adjectives that they feel best represent them.

They also go through PPG’s expansive selection of paint colors and choose hues for each board.

Using the four themes, these colors eventually will get whittled down to the 2018 color palette they present to customers.

“It’s really important for us to be aware of what trends are going on and the market, where the market is going,” Heape says. “When we give our clients those kits, they look at it as a barometer of where we are in our understanding of style and trend. If our kits aren’t on, they’ll lose their faith and trust in us.”

This, of course, includes choosing the color of the year. After days of discussing the trends and arguing their point of view — Heape says the process can get pretty passionate — the hue the experts settled on still is a mystery. The color of the year will not be revealed until June, typically with much fanfare.

Although she was unable to reveal the color of the year ahead of time, Schlotter (a self-admitted green lover) noted she was seeing a lot of buzz about yellow, specifically more neutral-tone yellows that could pair well with all of the greys that have dominated décor for the last several years.

“It’s definitely about finding that inner sunshine in a world that has a lot going on,” she says. “It’s a feeling of optimism.”