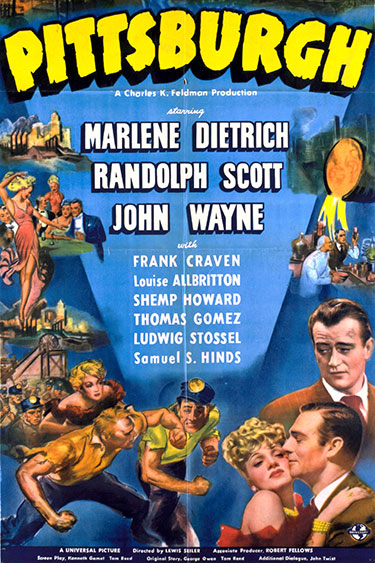 If nothing else, the film “Pittsburgh” illustrates how good the city’s name can be as … well, a name.

The character played by John Wayne in the 1942 film has the given name Charles Markham, but everyone calls him Pittsburgh; Pitt, for short. The first few times you hear it, it strikes an odd tone; after a few minutes, though, it seems like the most natural name in the world.

From here on, anyone who leaves town should just adopt Pittsburgh as their nickname. You know what, let’s take it a step further: Just name your children Pittsburgh. It’s certainly a better name than half of the sobriquets clogging up elementary schools as of late.

I found the rarely seen film as part of a discount John Wayne box set at Half Price Books; you’ll need to do the same if you’d like a look at it, as “Pittsburgh” is not available on any streaming or digital on-demand services, as far as I can tell. (Finding it shouldn’t be too tough a quest; there are plenty of Wayne sets out there, available everywhere from bookstores to truck stops.)

I was hoping for a glimpse of the Steel City of the early ’40s. Unfortunately, a glimpse is all I got; while the film is said to have been partially filmed in Pittsburgh, I couldn’t pick out much other than establishing shots of mills and hills. The jury is out on the one street scene; it could’ve been local but isn’t identifiably so.

While “Pittsburgh” was mostly created on the Universal Studios lot, however, it is certainly a western Pennsylvania story. Pittsburgh Markham and his buddy Cash Evans (Randolph Scott) are amiable coal miners who find themselves in a love triangle with Josie, a wealthy heiress (Marlene Dietrich). Josie encourages the boys to make something of themselves, and they woo a steel bigwig with a money-saving plan; by the middle of the film, Pittsburgh and Cash are nouveau riche.

Pittsburgh becomes a bit of a pill, screwing friends out of deals and climbing the corporate ladder. Josie ends up with Cash, after the best exchange in the film: “The trouble with you, Josie, is you’ve been too nearsighted to see the good times around you,” Cash says. “Too much Pittsburgh smoke.”

“The atmosphere is getting pretty clear,” she coyly replies.

On the other side of a fairly spectacular fight sequence in the depths of a coal mine — and, eventually, on a speeding elevator in a mine shaft — Pittsburgh inevitably learns the error of his ways, with a refreshingly pro-labor bent: “I’m going whole hog for the miner! I’m going to make Pittsburgh the best town to work and live in in America,” he exclaims to an incredulous former associate.

“Pittsburgh” is not exactly subtle; by the last reel, it becomes clear that it is more than anything a wartime propaganda film, urging workers and companies to go all-in on the war effort, complete with shots of factories churning out planes and tanks. But I couldn’t help but wonder if there was a bit of commentary on the Steel City, especially in naming Wayne’s character after it.

Pittsburgh (the guy) starts out as a blue-collar, coal-mining immigrant. After striking it rich in the steel industry, he gets too big for his britches and starts screwing over the workers. Eventually, he unites with his fellow man out of a duty to the greater good.

Perhaps that’s a metaphor for the way the rest of the country looked at Pittsburgh (the place) in the early ’40s, or perhaps I’m reading too much into it. “Pittsburgh” (the film) isn’t exactly a lost classic, but it’s enjoyable enough — and, seeing as how much we all love our frequent intersections with Hollywood, it’s worth tracking down for those who love pointing out local connections on screen.

Oh, and a pre-Stooge Shemp Howard plays a frantic tailor. That part is great.