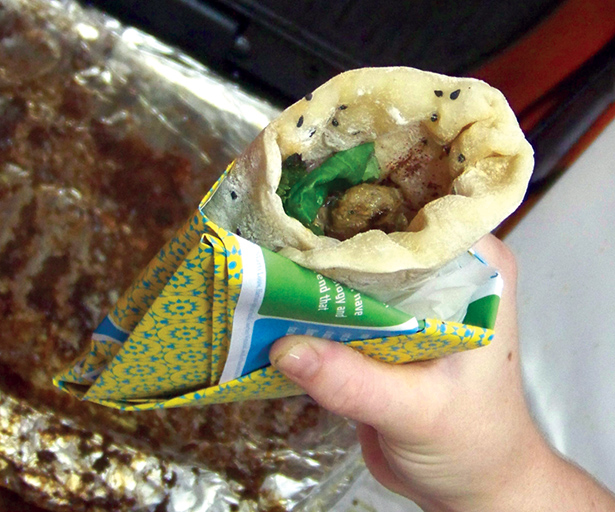 The kubideh sandwich is made with spiced ground beef, fresh basil, mint and onion on homemade barbari bread.

At the takeout window of a restaurant that only serves one item, a patron asks the worker at the counter if they pray over the food before they serve it. After all, how many Pittsburghers know Iranian food customs? And this is the only Iranian restaurant in the city.

Another man in line steps up to explain, "In Islam, we don’t have many rituals around food and prayer—they just don’t intersect all that often."

The first man identifies himself as a Japanese Buddhist, and the two begin talking about food and prayer in their respective religions, initiated just by stopping in for lunch on the sidewalk of East Liberty—at the corner of Highland Avenue and Baum Boulevard.

This is exactly the point of the Conflict Kitchen, a new venture which was opened in May 2010 by three über-creative, local art-repreneurs: Jon Rubin, John Peña and Dawn Weleski. "We’re artists," says Rubin, "not business people, so we tend to think of things a little backwards." 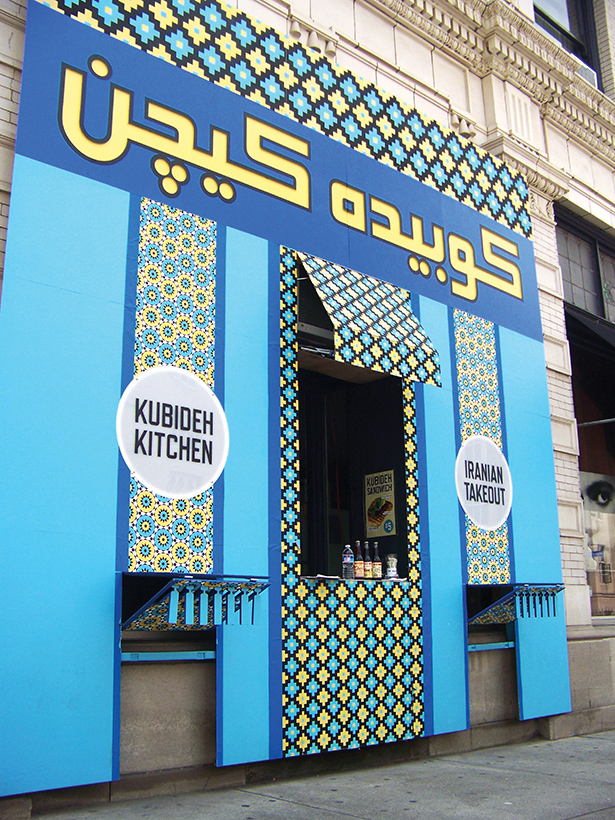 That is to say, when they thought of starting a takeout restaurant, they didn’t ask, How do we make money? They asked, What would be a really interesting form of cultural engagement?

The trio wanted to serve food that you wouldn’t normally find in Pittsburgh, and they realized all of their ideas were related to food from countries engaged in conflict with the United States. Thus, Conflict Kitchen was born, a takeout restaurant that serves hot food from a different hot zone every four months.

But Conflict Kitchen also serves food for thought: The takeout wrapper is printed with a tapestry of first-person perspectives from Iranians who discuss everything from local film to women’s rights to their perceptions of Americans. And to make sure the conversation continues, Conflict Kitchen offers accompanying public programs at the neighboring Waffle Shop, an eatery that doubles as a television studio and broadcasts a live-streaming, internet talk show starring its own customers.

"A lot of people, myself included, don’t have a very nuanced perspective of daily life in Iran," says Rubin, who created The Waffle Shop in 2008. "This project is an opportunity to open that door."

At one event, which played out like an interactive art installation, the trio set up a large projection screen on a wall at the Waffle Shop and established a live video connection through Skype between the Iranian capital of Tehran and Pittsburgh. After dining across from one another at a virtual table, the two groups played an enlightening call-and-response game using YouTube videos.

Here’s how it works: Let’s start with, say, sandwiches. Pittsburgh shows a video about Primanti Brothers, and Tehran follows suit with a video about its own one-of-a-kind sandwich joint, which roughly translates as "Dirty Joe’s Sandwich"—it’s got everything. Or Pittsburgh puts up a video about the G-20 riots, and the next video captures the explosive Green Movement political protests in Iran. Then a post-Steelers Super Bowl victory riot is juxtaposed with an Iranian sporting event that broke out into political chants. After viewing a cluster of videos, an open-ended, cordial discussion kicks off, and the two sides compare the visual buffet they’ve just consumed with their dinner.

"Having another layer of discussion shows that there are people behind it, lives and cultures," explains Weleski. "We try to be a starting point for conversations like that."

They certainly have been successful. Garnering coverage from New Zealand to Brazil, Conflict Kitchen has people talking. People write to request Conflict Kitchens in their cities, or they suggest what countries to feature next.

In case you’re wondering, the next frontier will be Afghanistan—look for it in early to mid-October.

This article appears in the September 2010 issue of Pittsburgh Magazine.
Categories: Eat + Drink Features, From the Magazine