Pittsburgh is one of 10 lucky cities that will welcome Doug Aitken’s one-of-a-kind public art project.

You’ve heard of art installations, but what about art infrastructure? This fall, a creative tour-de-force will rumble across America by train, and it’s making a stop in Pittsburgh. The project, dubbed “Station to Station: A Nomadic Happening,” is the brainchild of Doug Aitken, a visual artist who has worked with the likes of Andre 3000 and Cat Power on large-scale video installations.

"Station to Station" aims to be a “kinetic sculpture” that will serve as a cultural studio for artists, chefs, musicians, filmmakers, writers and other creatives. When the train makes its stop in Pittsburgh on Sept. 8, it will be joined by pop-up tents featuring local craft food and design purveyors.

No word yet on what the Pittsburgh stop has in store, but the tour will feature contributions from renowned artists such as Liz Glynn and Aaron Koblin (creator of the mind-bending video for Radiohead’s “House of Cards”). Musical collaborators including indie darlings Dirty Projectors, Ariel Pink and Twin Shadow.

Even the 10-car charter train itself will be a striking piece of art. Aitken plans to install massive, multicolored LED panels on the side of the locomotive. Check out a rendering of the train below. 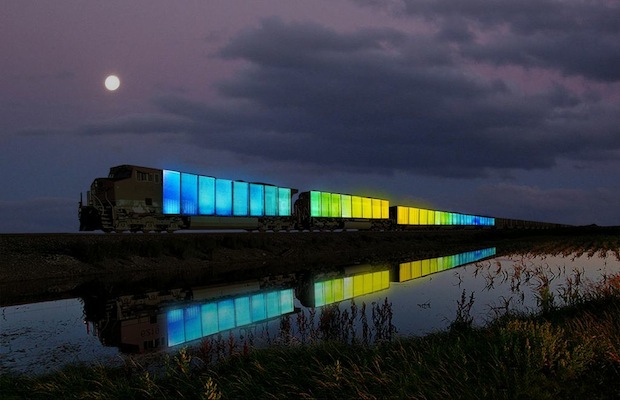