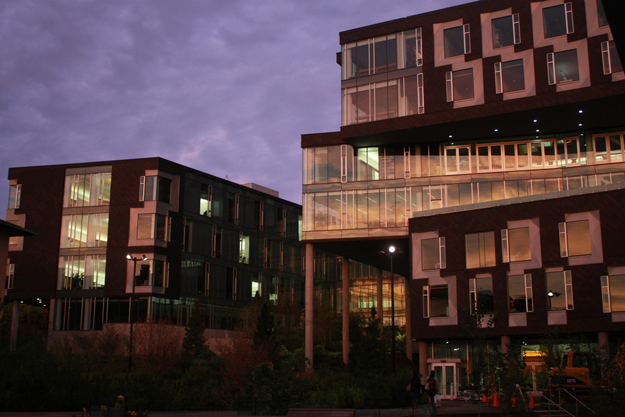 CMU's Gates-Hillman Centers Honored by American Institute of Architects
Whether it's the PPG building or the David L. Lawrence Convention Center, Pittsburgh is a city filled with unique architecture. In fact, one local building has been recognized by the American Institute of Architecture (AIA) as one of the best designed buildings in the world for 2012.

Carnegie Mellon University's Gates-Hillman Centers, constructed in 2009, was selected from a field of 700-plus entrants. It is joined by such esteemed company as 8 House, a one-of-a-kind apartment building in Copenhagen, and The Standard in New York City.

Unique conditions at the building site gave rise to the building's design, allowing it to be constructed as a single structure while being treated as two buildings.

The zinc and glass complex encompasses 217,000 square feet of office space, classrooms and other educational space. It houses the Gates Center for Computer Science and the Hillman Center for Future-Generation Technologies.

Cal U Tops National Ranking for Online Programs
In an era where people quite literally carry the Internet around in their pockets, the limits of what can be done online are quickly disappearing — and one local institution is being recognized for taking its programs to the digital frontier. California University of Pennsylvania was recently recognized by the Guide to Online Schools as the No. 1 school in the country for online learning. The rankings were determined by a number of factors, such as accreditations, cost of tuition and books, student-to-faculty ratios, graduation and retention rates, and student feedback.

This is the second time in a row that Cal U's online programs, which serve more than 1,800 students, have been recognized as the very best.

Pollan is the author of The Omnivore's Dilemma: A Natural History of Four Meals, which was named one of the 10 best books of 2006 by The New York Times and the Washington Post. During his lectures (yes, he'll appear twice — on the RMU campus, then at Heinz Hall), he'll address the transformation of how Americans are eating. This could be positive reinforcement for anyone who vowed to eat healthier in 2012.