Plus a poet laureate is set to read at Chatham and Pitt wants to make you a very comfortable business pro.

>>MUST-HAVE APP
CMU answers a pressing question: When’s the bus arriving?
I’ve spent many an hour standing at a Port Authority bus stop thinking: OK, so either the bus is arriving in five minutes, or I missed it and it’s arriving in an hour. Or I’m at the wrong bus stop. Or that route doesn’t run anymore. Fortunately, Carnegie Mellon University—and the people of Pittsburgh—have arrived to ease my confusion. As part of their Traffic21 initiative, researchers at CMU’s Rehabilitation Engineering Research Center on Accessible Public Transportation developed Tiramisu, an iPhone app that gives crowdsourced bus information to PAT riders. When you arrive at your stop, check the app to see what buses are on the way and how soon they should be arriving; leave it active when you board, and it’ll tell those waiting at upcoming stops the same info. The app is available for free from the iTunes App Store.

>>CAN’T MISS
Iowa’s poet laureate to read at Chatham
Poet Mary Swander, who has appeared in publications including The New Yorker, Poetry magazine and The New York Times Magazine, will be giving a free public reading at Chatham University’s James Laughlin Music Hall on Friday. Swander, the poet laureate of Iowa, is currently a poet-in-residence at Chatham’s Low-Res M.F.A. in Creative Writing program. She’ll be reading selections and speaking on “The Role of the Writer in a World of Peak Everything.” She’s been publishing since 1979 and received an NEA Grant, among many many other accolades, so you probably shouldn’t miss this one. Check out her website for a preview! 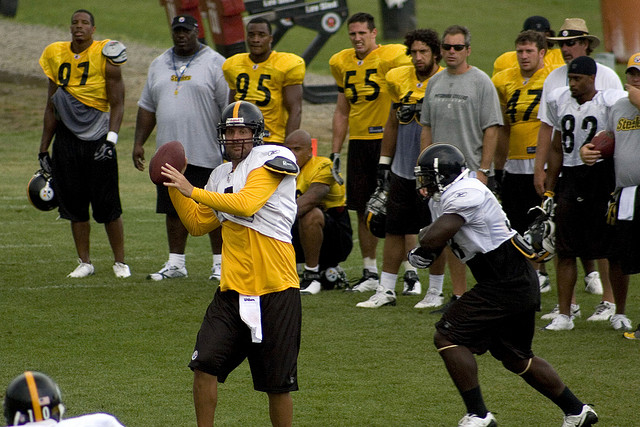 Whew! Close one there. We almost had to face the prospect of a summer without our annual pilgrimage to the beautiful campus of Saint Vincent College. Luckily, the NFL Lockout ended in the nick of time, so every self-respecting Steelers fan is headed for the small Catholic school in Latrobe, Pa. As Saint Vincent president Br. Norman W. Hipps, O.S.B., said in a press release, “The relationship between the Steelers and Saint Vincent is one we value greatly because of the excitement it brings to the campus and the surrounding region.”

If you’re making the trek this year, find some time between public practices (most days between now and Aug. 16 at 2:55 p.m., plus an evening practice Aug. 5 at nearby Latrobe Memorial Stadium) and Latrobe bar-hopping to wander around Saint Vincent itself. Of particular note is the beautiful, fully restored Archabbey Basilica that was built in 1892. It’s very unlikely that any bone-rattling tackles or beautifully executed draw plays will occur in there, but it’s worth your time anyway.

>>WAIT-LIST
Pitt wants to make a business pro out of you … from your living room
Is your resume in need of some sprucing up? Need to be familiar with a spreadsheet but don’t really have the time for an M.B.A.? The University of Pittsburgh’s Joseph M. Katz Graduate School of Business feels your pain. For the past decade, the school has offered a 30-credit “mini-MBA” certificate program called Management Essentials; now, it’s offered as an online version. The 11-week program focuses on leadership, accounting, marketing, business ethics and more. And Pitt’s faculty is more than present in cyberspace; videos of lectures are a key part of the coursework, and discussions are led through blog posts, online projects and more. Be sure to check out the virtual open house being offered on Monday, Aug. 8 at 6 pm.

This article appears in the August 2011 issue of Great Minds.
Categories: Great Minds