Plus, Cal U receives props for veterans  initiatives and Chatham is poised for international expansion. 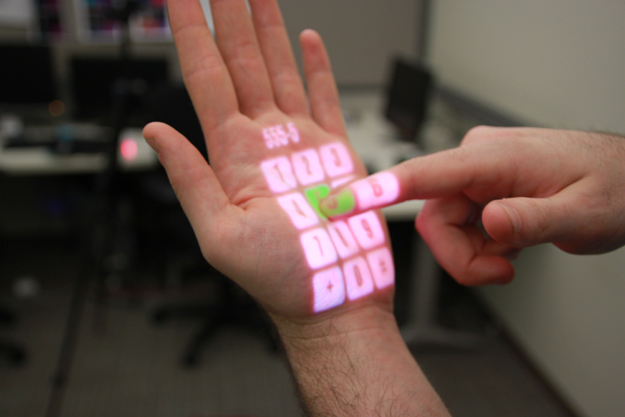 Whether it's Captain Kirk’s iconic communicator fromStar Trek, the home theaters of Fahrenheit 451 or (more recently) the e-readers from The Hitchhiker's Guide to the Galaxy, science-fiction gadgets have been a part of our daily lives for quite some time.

While science may be a few years away from beaming us all into computers, Carnegie Mellon University has brought our machines a bit closer to us with a new system, OmniTouch.

The shoulder-mounted system, a collaboration between CMU Ph.D. student Chris Harrison and researchers at Microsoft, employs a depth-sensing camera and laser pico-projector, allowing users to manipulate a graphical interface. In laymen’s terms: It turns any surface into a touchscreen display.

Currently, the system is only a little larger than a TV remote, but Harrison says he hopes to compress it to the size of a matchbox, allowing for integration in future handheld devices.
—Rob McCoy, PM Editorial Intern

Cal U among the nation’s best bets for veterans
On Friday, we will honor our veterans for their selfless service to our country. But here in southwestern Pennsylvania, we can also commend California University of Pennsylvania for its recognized commitment to helping those who serve pursue higher education. Cal U made the Military Times EDGE “Best Colleges for Vets” list once again, soaring through the ranks from No. 37 to No. 4.

At Cal U, roughly 230 military veterans attend on-campus classes and are connected with the Office of Veterans Affairs, which provides financial, academic, acclimation and career assistance for veterans and their families. Furthermore, the university’s Veterans Club, which has operated for more than 20 years, was established with the mission of smoothing the transition between the formal structure of the military and the challenges of modern higher education.

In addition, Cal U is recognized as an “eArmyU school” for its dedication to helping soldiers achieve their post-secondary education goals through Internet-based learning. With approximately 260 service members enrolled in its online community, Cal U has become a gateway to learning for those stationed around the world.
—Richelle Szypulski, PM Editorial Intern

Chatham looking to expand global footprint
Chatham University, already among the ranks of local institutions with a global presence, is poised for even more international expansion. The university was recently selected by the Institute of International Education (IIE) for the organization’s 2012 Brazil initiative.

The program, provided by IIE’s International Academic Partnership Program (IAPP), will provide training exercises aimed at helping Chatham form and maintain relationships with Brazilian institutions before the university eventually embarks on a study tour in an attempt to forge partnerships. For its end of the bargain, Chatham officials have committed to forming a task force aimed at fostering South-American collaboration. According to the IIE, Brazil is gaining attention from colleges and universities around the world due to its government-sponsored growth in higher education and a booming economy.

Chatham was one of just 18 U.S. institutions selected for the initiative It is also one of six American universities taking part in IIE’s U.S.-Indonesia Partnership Program. IIE official Leena Soman called the university’s participation in the Brazil initiative “a testament to its commitment to international education.”
—Rob McCoy, PM Editorial Intern

Carlow takes the spotlight with Stage Door
With so many world-class local theater departments, it can be easy to focus on the performances from Point Park, CMU and Pitt and forget that there are other games in town. This month, Carlow is out to prove they know a thing or two about the stage themselves. Carlow University Theater (CUT) will present the classic comedy Stage Door, written by Edna Ferber and George S. Kaufman and (loosely) adapted into an Academy Award-nominated film in 1937. The comedy, about a group of actresses living in a New York boarding house and trying to make the big time, plays Thursdays through Saturdays until Nov. 19. Carlow offers a theater minor, and PM’s Robert Isenberg once said of CUT (in the Pittsburgh City Paper): “This is theater at its purest and happiest. For these young performers, so full of nervous energy, the simple joy of entertaining is priceless.”

This article appears in the November 2011 issue of Great Minds.
Categories: Great Minds