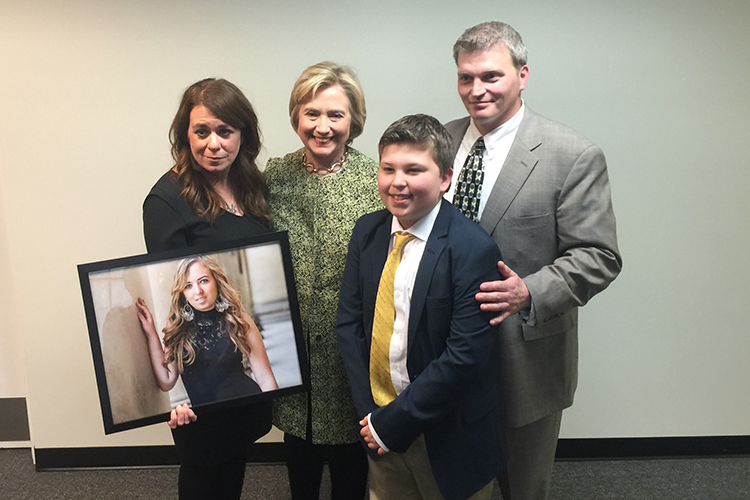 Democratic presidential candidate Hillary Clinton’s visit Wednesday to Carnegie Mellon University included a private meeting with the grieving parents and family of a Woodland Hills High School senior who, before her death Saturday, had been a fervent supporter of Clinton.

Caileigh McDowell, 17 of Forest Hills, died Saturday of complications from Crohn's disease; her funeral service is set for this afternoon. The Woodland Hills senior was described as a “full-blown political junkie, feminist and equal rights proponent by age 8” in an obituary in the Pittsburgh Tribune-Review. She would have turned 18 on Monday; her family said she had been eager to reach that age so she could register for the upcoming primary election and vote for Clinton.

Her aunt, Lynn Banaszak, told the Trib that the former Secretary of State spent 15 minutes with the family Wednesday before the candidate's rally at CMU.

“She was very touched and very compassionate about the enormity of the loss to our family,” said Banaszak, who was in the meeting with Caileigh's parents, younger brother and others. “We explained how bittersweet it was that we were standing with her without our Caileigh, who admired her so much.”

Clinton posed for a picture with Caileigh's younger brother, Christian, 11.

“She had a very nice conversation with him about following his dreams and doing whatever it is he has a passion for,” Banaszak said. “Just like Caileigh.”

Woodland Hills social studies teacher Lesley McDonough said Caileigh took an interest in fellow students who felt like outcasts or were treated unfairly by others.

“She made it her mission to seek out justice and make the world a better place,” McDonough told the Trib. “She was my most active student in class. She was a spitfire. I could have seen her becoming an attorney.”

The Woodland Hills Superintendent approved early dismissals on Thursday for any faculty and students who wanted to attend Caileigh’s funeral today at St. Maurice Church in Forest Hills.