Classic Christmas Tale Gets a Twist at Slippery Rock University

An adapted version of “A Christmas Carol” will be presented during a seven-show run. 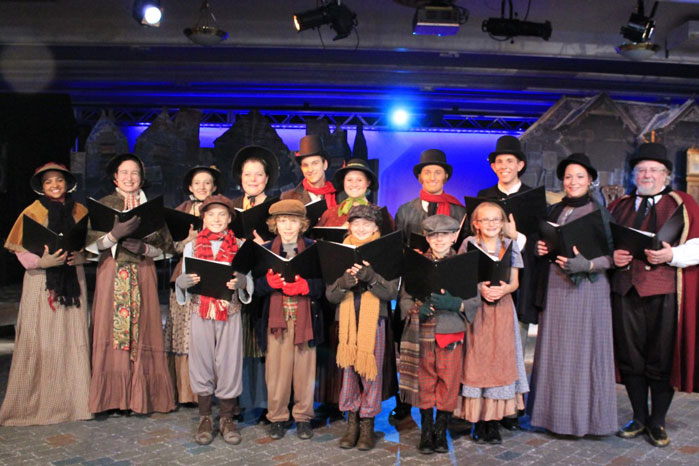 Charles Dickens’ classic tale of Christmases past, present and yet to come will run in an adapted version from Dec. 2-8 at Slippery Rock University.

Based on the novella by Charles Dickens and adapted and directed by David Skeele, a professor of theatre, the Slippery Rock version incorporates original dialogue and additional characters.

The cast features Slippery Rock University students, and members of the community and educators from the school will serve as puppet, set and costume designer.

The Ghost of Christmas Past will be played by a woman in a light-up dress propelled across the stage on a dolly by Hell's Footmen, a trio not featured in the original work. The Ghost of Christmas Present will take the form of a living Christmas tree rather than the traditional merry giant depicted in most film and theatrical versions of the play.

"A traditional proscenium production might involve flying in highly realistic sets and using stage machinery to create illusions," says Skeele in a press release. "However, a lot of the artistic decisions we make in this production are influenced by the space we play in. We have to make the magic right in front of the audience's eyes, in a very theatrical way."

"For instance, we use the Hell's Footmen the same way the assistants are used in Kabuki Theatre: they propel The Ghost of Christmas Past about on a rolling platform, and we can understand immediately that it represents time travel.”

Shows are scheduled in the University Union with presentations at 7:30 p.m. on Dec. 2, 3 and 5-8; there will be a 2 p.m. matinee on Dec. 4. Tickets are $8 for students with ID and $12 for the public, and they can be purchased online beginning Nov. 18 or in person at the Smith Student Center Information Desk.

This article appears in the November 2016 issue of Great Minds.
Categories: Great Minds