These are working-class neighborhoods, where row houses are old and weathered, and the sidewalks are cracked. This is where Pittsburghers do what they do best: make something out of nothing. 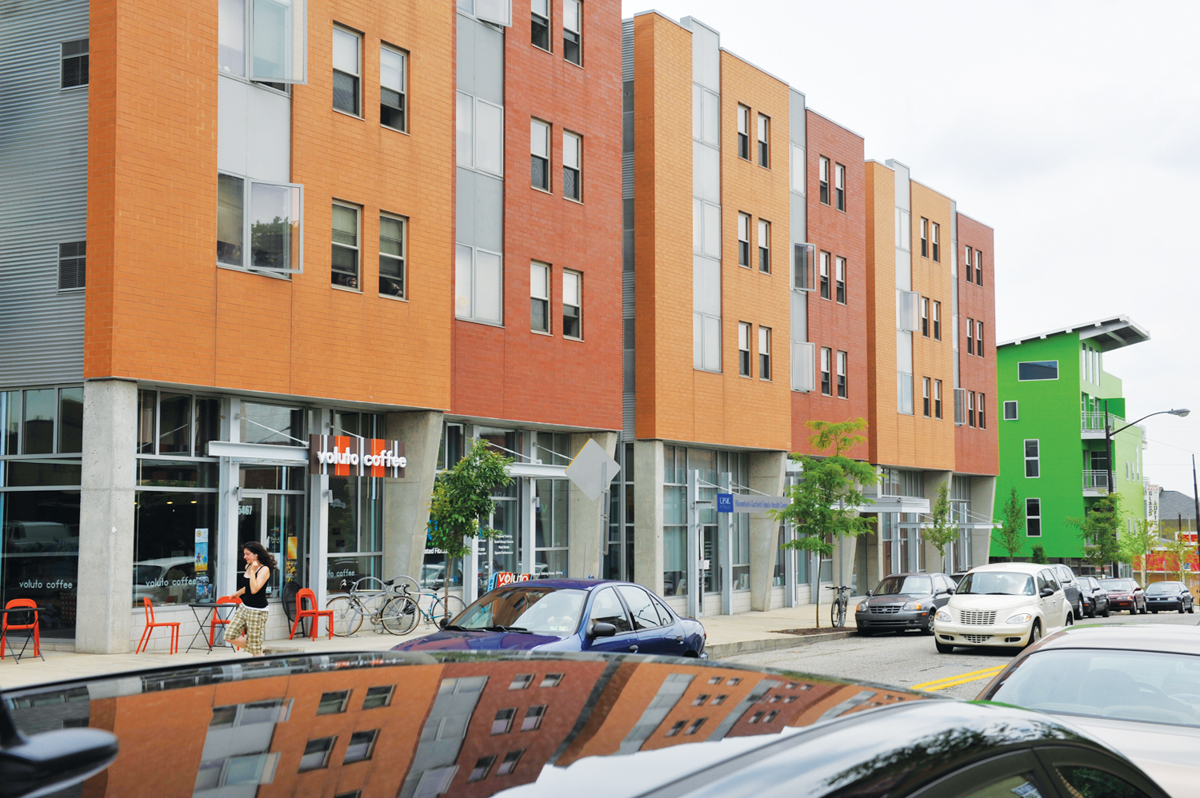 “I love Unblurred!” people say. “I come down every first Friday. Even in winter!”

They come even when the streets are covered with sleet and slush and night descends at 5 p.m. Even in the dead of winter, people flood Penn Avenue and walk purposefully from gallery to gallery. They sip wine from plastic cups and trade stories and study paintings and sculpture. They don’t care how hard it is to park. Let the rain pour. They wouldn’t miss this for the world.

And that is the spirit of the East End, this mishmash of neighborhoods, where Friendship and Garfield and East Liberty flow into each other without a visible break or border.

Residents here are serious about their neighborhoods. They put cafés in run-down old buildings, like Shadow Lounge and Quiet Storm Vegetarian & Vegan Cafe. They renovate defunct storefronts and create art galleries, like ModernFormations, Garfield Artworks and Most Wanted Fine Art. Bohemians and entrepreneurs coexist with families and shopkeepers who have lived here since time immemorial.

The district hosts all kinds of wild experiments, like The Waffle Shop, a multimedia breakfast nook, or the bookstore Fleeting Pages, which spent a month in an abandoned Borders. For one year, ArtDimensions Pittsburgh and Näkturnal occupied a former PNC Bank. East Liberty became home to Abay, the first Ethiopian restaurant in Pittsburgh, and it was so successful that a rival restaurant, Tana, opened down the block. 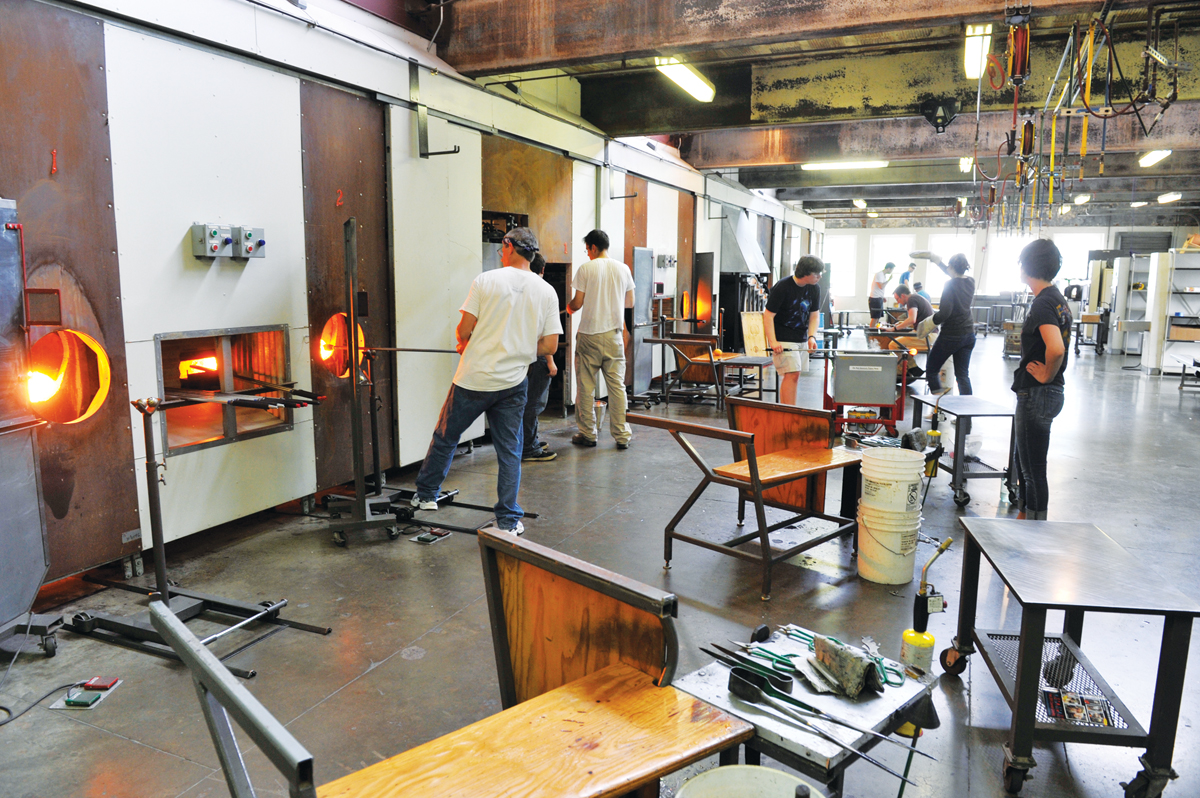 This is where the Children’s Home of Pittsburgh was rebuilt, where the Pittsburgh Glass Center constructed its studios, where Awesome Books opened its doors and where the Union Project took over a disused church. On a still struggling block of Penn Avenue, master chef Kevin Sousa envisioned Salt of the Earth—now the most revered restaurant in the city. All these projects began as crazy ideas, but the invention and tenacity of their creators made them successful.

New development has popped up all around the East End, most recently the eco-friendly Glass Lofts, the Bakery Square development and a brand-new Target. But even these super-new constructions have nurtured plucky independent businesses, like Dinette, Plum Pan-Asian Kitchen and Voluto Coffee.

Meanwhile, visitors can still lose themselves among the backstreets of Friendship and East Liberty, where scenic sidewalks and cultural surprises lie around every corner. Before they became innovation colonies, these neighborhoods once were home to immigrants and laborers of all stripes, and that authentic lifestyle is preserved in old buildings and corner stores. Friendship’s houses are among the most beautiful and dignified in Pittsburgh, and dicing them into apartments has only made Friendship friendlier.

On any given night, a band is playing, spoken word is performed, benefits are hosted, art is unveiled and glass is blown. Once you know them, it’s hard not to love these neighborhoods.

Focus on art
“Unblurred” is an informal art event that takes place along the Penn Avenue corridor on the first Friday of every month. Numerous galleries (between blocks 4800 and 5500) stay open late to host a variety of performances and art exhibits, from paintings and sculptures to music and dance — and more. Most events are free and area cafes and restaurants usually offer discounts. The Pittsburgh Glass Center hosts a free open house featuring live glass blowing and flame working demonstrations in their building on Penn Avenue, along with contemporary glass art exhibits. Most months, the Dance Alloy Theater offers Unblurred patrons a reduced-cost performance. The company specializes in ballet and modern dance laced with theatrical elements — and you can usually take in a show for around $7.

Stretch your horizons
If everything we did in life was on a “pay what you can” system, things might get messy. But yoga is one thing that we are able to revel in for any amount we can afford. Pittsburgh has a great selection of places that provide classes for whatever each individual can afford to dish out, and two such studios happen to be located in the East Liberty area. Yoga on Centre and Human Race both give the community a chance to enjoy P-W-Y-C yoga once a week. The teachers are wonderful, the classes are relaxing, and the price is right.

Waffles and dialogue
Although it seems like a place with waffles in its name would be famous for, well, waffles, it’s actually an interactive art project that put The Waffle Shop on the map almost three years ago. The East Liberty shop calls itself “a public lab that brings together people from all walks of life to engage in dialogue, experimentation and the co-production of culture,” and also serves as a Carnegie Mellon classroom. So what exactly is this incomparable art project? The highlight is a live streaming talk show, putting customers up on stage as the center of attention. Talkative diners can eat their waffles and then join the host to chat about any topic their hearts desire. Now, just because we’re saying the focus is on the experience, that doesn’t mean the waffles aren’t tasty­—because they are. Try the bananas foster: a waffle topped with vanilla bean ice cream, bananas and a brown sugar sauce—for only $6.50.

Funk your soul up
When your body wants to dance and your soul wants to groove, there’s no better place to be than Shadow Lounge for their Title Town Soul & Funk Party. A mellow “Blue Room,” wild wall projections and five hours of soul and funk delivered via classic 45’s makes Titletown the ultimate stomping ground for anyone wanting to release some steam. The cover is just $5 for those 21 and older and $8 for the under-21 crowd.

Bonus Sweet Deal: Grab a cheap slice at Spak Bros
Every city has good pizza. Every city has cheap pizza. But really good and cheap? Spak Brothers on Penn Avenue is in that rarefied air. Buy a whole large pie for $8 or just grab a hot slice for $2. Buenísimo. Visit LivingPittsburgh.com for a list of joints that offer half-priced pizza throughout the week.