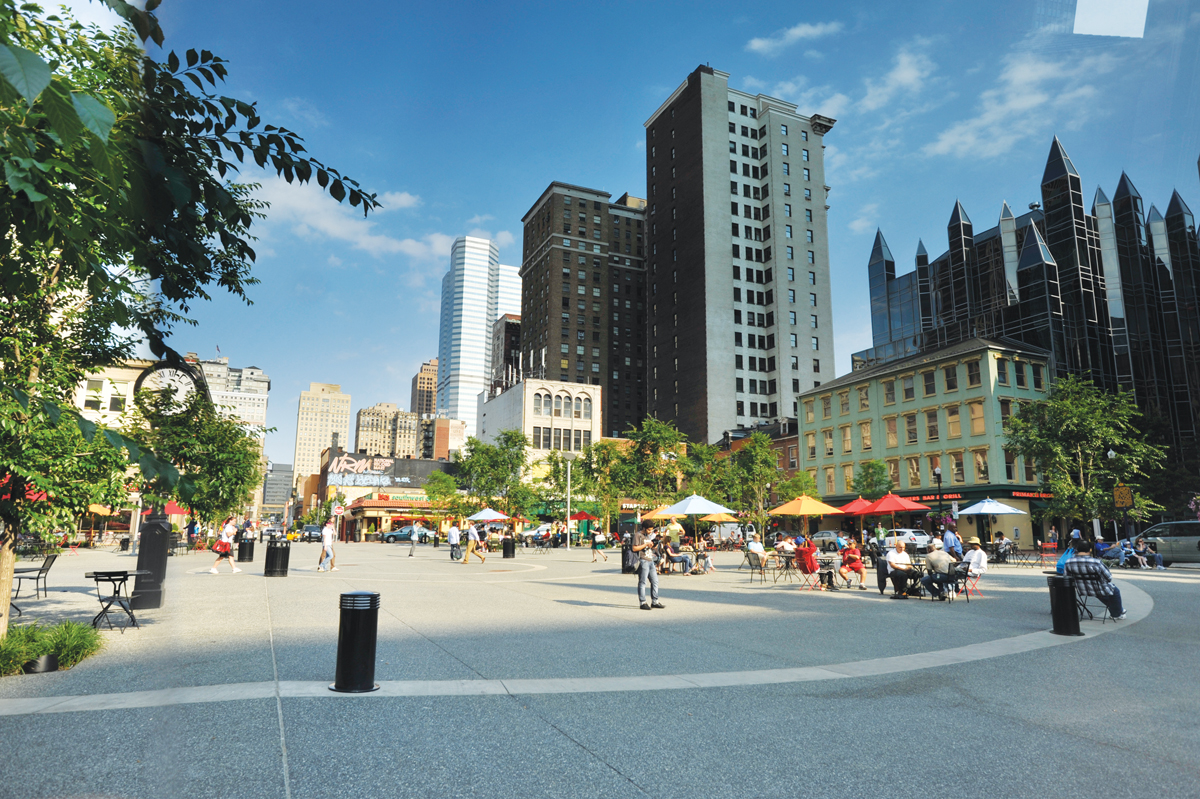 This strategic piece of property, wedged where the Allegheny and Monongahela rivers meet to create the mighty Ohio, was destined for great things—from Fort Pitt to the modern Golden Triangle.

Visually speaking (or seeing), downtown is what defines Pittsburgh. For residents and visitors alike, it is the face of the city—its very quintessence.

The mighty skyscrapers that create the skyline indicate Pittsburgh’s importance as a longtime hub of business and commerce. But look carefully: The U.S. Steel Tower, the city’s tallest building, now carries a lighted UPMC sign atop its 64 stories. It’s a symbol of the ongoing identity shift here—no longer just the Steel City, we’re now a center for “eds and meds.”

Of course, change is not new to downtown. In fact, it might be seen as a constant through its more than 250-year history. Arising from the forest primeval, this prime location has transformed from a contested outpost of colonial empire to a fledgling settlement, then growing into town, borough and city. It was drastically reshaped by urban renewal in the mid 20th century and several Renaissances, and has needed to reinvent itself to respond to the growth of the suburbs and the decline of industry.

Journey into downtown, and you’ll see the myriad elements that constitute the Golden Triangle in the 21st century—from the Block House, a remnant of Fort Pitt and Pittsburgh’s oldest building (built in 1764), to the latest skyscraper, Three PNC Plaza (completed in 2009), the August Wilson Center for African American Culture (2009) and uptown’s CONSOL Energy Center (2010), home to the Pittsburgh Penguins.

Downtown is a hub for business, commerce, government, education, shopping and dining. There are venues for the arts and entertainment within the Cultural District. There are museums and houses of worship. There are parks and plazas, outdoor sculptures and murals (don’t miss a witty interpretation of Andy Warhol and Andrew Carnegie painted on the side of a 19th-century building).

During the summer, you might find fishermen (or women) casting their lines along the riverfronts. When winter arrives, skaters head for the rink at PPG Place. Some of them can even walk there, because downtown’s also a neighborhood. Increasingly, more Pittsburghers are living in the heart of the city—opting for contemporary high-rises or recycled landmarks (including The Pennsylvanian, a grand old train station).

Moreover, because it’s the place that virtually all people in the Pittsburgh region have seen, visited and experienced—and share in common—downtown is really everyone’s neighborhood. 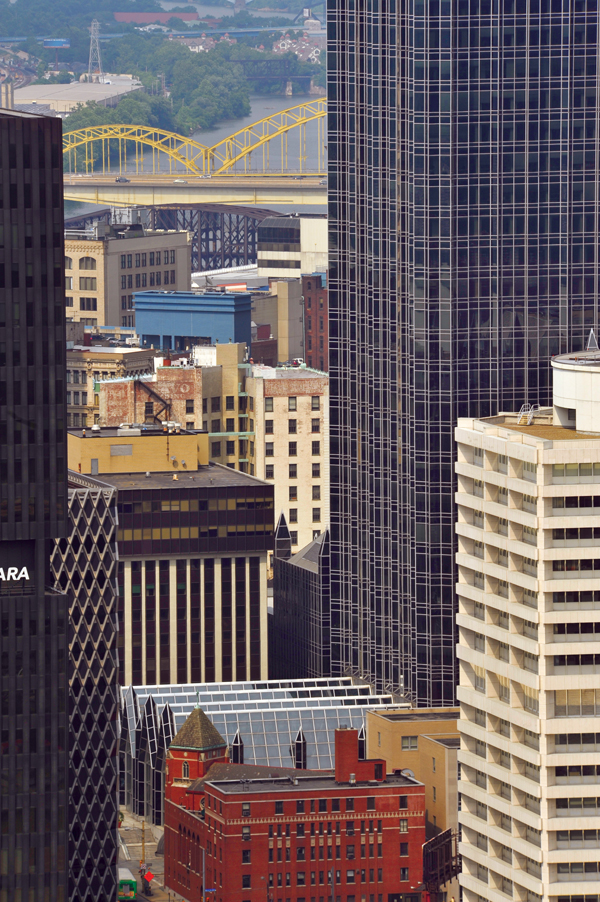 The Pittsburgh Cultural Trust makes catching great entertainment downtown more affordable than you might think. On Tuesdays from 5-11 p.m., JazzLive at Backstage Bar offers patrons the opportunity to catch excellent, free performances. And if that’s not enough, the bar also serves $5 Absolut Martinis all day—so you can sip on a tasty cocktail while listening to the tunes without spending all your cash. During the summer months, JazzLive moves outside to the Katz Plaza from 5-7 p.m. And if jazz and cocktails aren’t your thing, how about improvised comedy and beer? Every Thursday at the Cabaret at Theater Square, you can laugh out loud to live improv and drink from a selection of $2.50 craft beers ($3 cover, must be 21 to attend, show starts at 10 p.m.). As a bonus, Happy Hour at the adjoining Backstage Bar runs from 9-11 p.m. Tuesday through Friday.

Explore downtown’s art scene
Downtown is teeming with free art galleries (22 venues to be exact): Shaw Gallery on Liberty Avenue features historical art, rare prints and maps spanning three centuries; Wood Street Gallery focuses on “technology based art”; and SPACE highlights multiple art mediums. Get a perfect sample of Downtown’s art scene during one of the free quarterly Gallery Crawl events hosted by the Cultural Trust. The crawls showcase all of what the Cultural District has to offer—entertainment, music, art, dance, food and more. Get your Crawl on in January, April, July and October.

Let the kids play, too
Downtown isn’t only for grown-ups. The little ones can have their fair share of fun, too. And, of course, Living Pittsburgh has some free favorites. Tiny Tots is a free children’s music series held during the winter at Heinz Hall, featuring performances by the Pittsburgh Symphony Orchestra geared toward children 3 and older (reservations required). During the summer months, elementary and preschool-aged children will have a blast while taking part in Market Square’s KidsPlay! activities. The Friday events include stories, crafts, free treats from WISH 99.7-FM, special guests and more.

Walk, walk, walk
Whether you’re a local or an out-of-towner, walking tours can be a great way to learn more about a city. Pittsburgh has plenty of them—and the Pittsburgh History & Landmarks Foundation offers four downtown tours for free! From May through September, you can enjoy a different tour of downtown each month. Explore and learn about Market Square, the Cultural District, Pittsburgh bridges, river shores and more—without spending a dime! Plus, if you can’t make a tour on the scheduled date, self-guided walking tours are available through the organization’s website (just visit phlf.com and download the PDF).

1-2-cha-cha-cha for no moolah-la
Salsa Pittsburgh offers salsa events all around the city, many of which are free. Even the ones that do charge a cover are affordable, so that means you can afford to salsa almost every night of the week. A Monday at Seviche is a great time to give it a whirl, and we want to see perfection on that enchufla in two months. Visit LivingPittsburgh.com for more info on cheap salsa lessons in the city.

More sweet deals downtown
>> Catch a $5 matinee of classic and indie films at the Harris Theater
>> Ride the "T" for free.

The Shops of One Oxford Centre
Fourth and Grant Streets
412/391-5300
shopoxford.com