German blends a collage of community activism and soul-searching artistry. 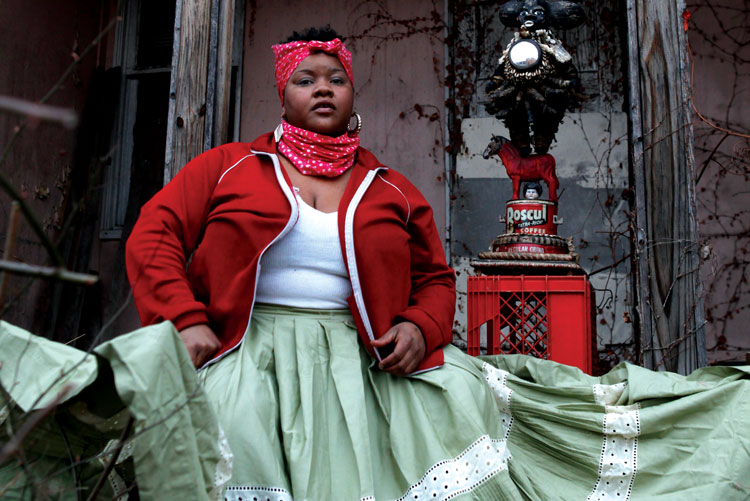 Vanessa German is always an artist.

She is an artist when she works and when she rests, when she slips into a creative trance and when she hangs out with people she loves, when she addresses audiences across the country and when she listens to her neighbors. She wonders why anyone would separate art from the incidents that summon it from the soul. She often is confronted with — and dismisses — the idea “that you are an artist only when you’re making something, that you clock in and clock out of it, that you’re not always thinking and channeling and funneling the world,” she says as she sits on the porch of the ARThouse, the community art institution she runs from a gorgeously decorated house in Homewood.

Inside, boys and girls are decorating bird feeders and writing letters to President Barack Obama, asking him to visit on his next trip to Pittsburgh. Every so often, a child dashes outside to show German his or her progress. German, who is also making art — tying red yarn around scraps of red fabric to make large beads for a sculpture — stops what she’s doing to offer praise and analysis. “It’s abstract,” she tells a little girl who displays with pride a paint-smeared and glitter-dusted heart. “It’s just what you feel.”

That brief exchange was art. The mosaics and murals covering the two-story house are art, as is the sign in the front window proclaiming: “You Are So Beautiful.” For German, 39, art is more than a profession or even a pastime. Art is fundamental to being human. “It’s how I came to understand what it meant to be alive,” she says. 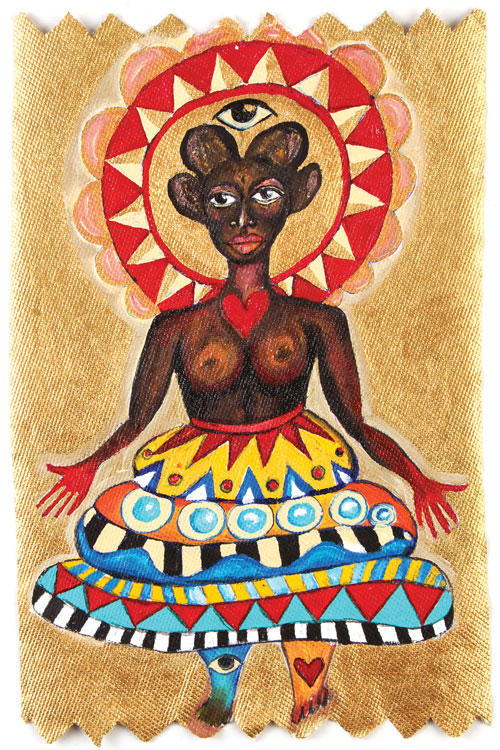 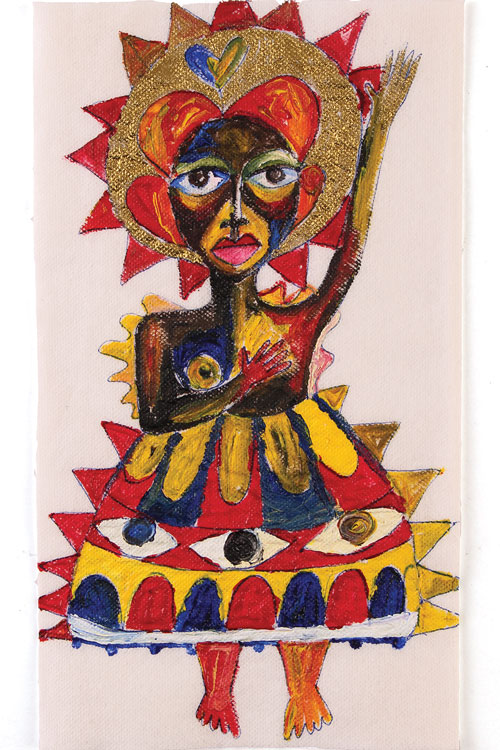 Her current exhibit, “Introspective,” at the August Wilson Center for African American Culture, which runs through July 8, makes that understanding explicit by revealing the circumstances behind a selection of recent sculptures, drawings, paintings and photographs. Writing directly onto the walls of the gallery, she describes her situation and emotional state when she made certain pieces. “You see how these social issues are meeting the impetus inside of me to do more than just say, ‘That’s f—– up,’” she says. “It generates this other thing.” Art.

A look back is justified as German becomes increasingly well known: The proudly self-taught artist has been steadily rising in stature over the past decade. This summer, the prestigious Wadsworth Atheneum Museum of Art in Connecticut — the oldest continuously operating public art museum in the country — is hosting her first solo museum exhibit, a sign that German is one of the leading emerging artists in the country.

The social issues German uses as inspiration often start in Homewood. Perhaps no artist working in western Pennsylvania right now is more closely bound to a specific place than German is to Homewood. Its fortunes and tragedies inspire her. Her art nourishes and glorifies the neighborhood.

The inspiration can take a recognizable form. Her 2013 exhibition of sculptures “Homewood” at the Pavel Zoubok Gallery in New York City was a physical manifestation of the spirit of the neighborhood, but the inspiration also comes from nontraditional places.

When children began congregating on her porch to watch her work, she invited them to work alongside her. That became the ARThouse, which moved twice before arriving at its permanent spot on Homewood Avenue. After hearing gunshots one day, German imagined yard signs promoting love and nonviolence, not unlike political campaign signs touting various candidates. Soon, hundreds of signs insisting “Stop Shooting: We Love You” and “No Guns: Keep Summer Fun” appeared in yards throughout Homewood, and then across the East End and beyond. When a murder traumatized her neighbors, German painted a square of sidewalk gold as a memorial.

“She puts herself into the work,” says filmmaker Gregory Scott Williams Jr., who followed German for three months to make a documentary called “Tar Baby Jane” in 2010. “She deals with personal issues, and those personal issues are also societal issues.” 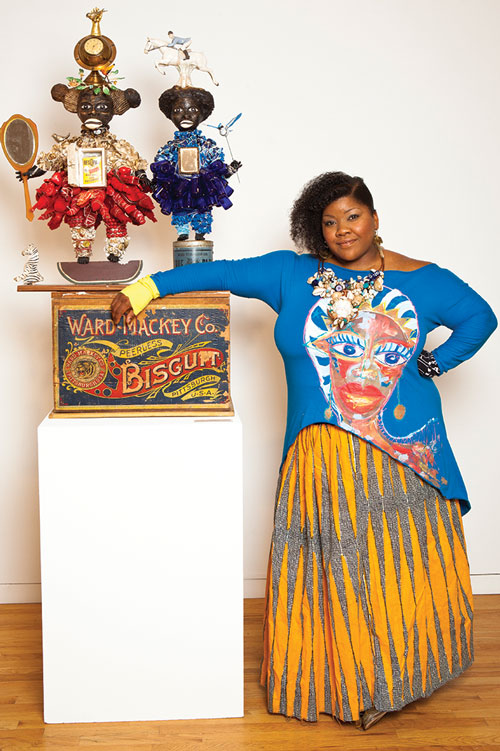 Classifications can limit an artist as big-hearted as German. She paints, sculpts, writes and performs. A better way to define her art is by describing its nature.

German collages. She turns common materials into structures much greater than the sum of their parts. She makes what she calls “power figures” by ornamenting large dolls with knick-knacks and tchotchkes — everything from beer-bottle caps, to gold-dipped feathers, to electrical sockets — to create regal idols with prominent African-American features and resonant symbolism. The venerable magazine ARTnews described them as “social puzzles” for the way racial and cultural history seeps from their accumulations of objects: an old tin labeled “crackers,” a seashell turned sideways into full lips, a bar of “White King” brand soap, tiny toy guns.

Her poems — both written and performed — also are collages. She assembles snippets of conversation, famous quotations, headlines, statistics, academic findings, character sketches and local legends into cohesive statements about struggling and surviving as an oppressed minority.

Her poem “The City is Ours Today,” delivered at Mayor Bill Peduto’s inauguration in January 2014, started as a smiling ode to the beloved bridges and staircases and hills of Pittsburgh and gradually expanded in scope. Her praise became a defense against charges of irrelevance and provincialism.

“People think that we’re just this little speck on a map/that had its heyday in a black sky/way back then,” she said, her voice and hands swirling. “But the reality is/Pittsburgh is a city family/and that is something to be proud of/That we could stand on the corner of 20th and Smallman/LOST/looking for a bus/to get you from Downtown/to the Manor Theatre in Squirrel Hill…15 people and their grandmother would STOP.” Here German paused for several seconds, as the audience cheered and clapped in recognition. “People would offer you rides/Then they would offer to mow your lawn and shovel your driveway.”

Her defense of the city became a challenge for it.

And then she gracefully made the insight even larger and more bracing by drawing a conclusion: “We will insist that the city be as livable for me and as it is for you.” 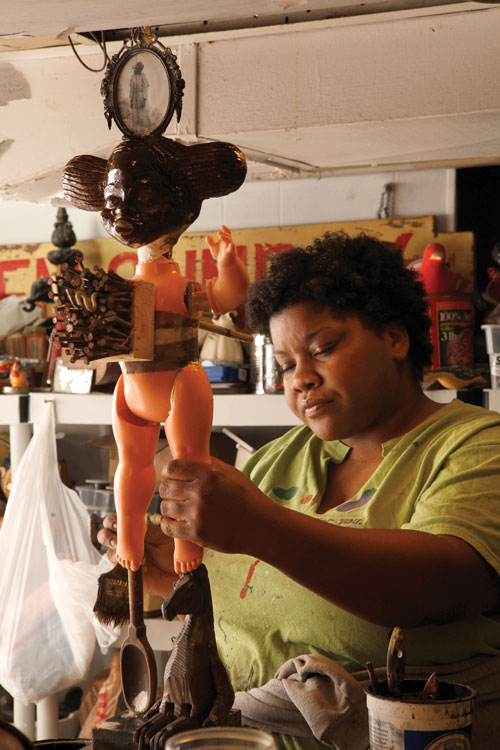 German, who is single, grew up in Los Angeles in the 1980s and moved to a town outside Cincinnati as a teenager. She followed her parents to Pittsburgh in 2000 and soon began exhibiting and performing locally. Around the time the Pittsburgh Center for the Arts named German its Emerging Artist of the Year in 2012, she began receiving notice outside the city. She participated in exhibitions in Ohio, Maryland, Missouri and South Carolina, gained representation from the Pavel Zoubok and was included in a travelling Smithsonian Institute retrospective of African-American art since 1950.

“This is her chosen city,” says Women and Girls Foundation CEO Heather Arnet, who cast German in her 2004 play “Yo’Mama!” She also directed German’s breakout spoken-word opera “root” in 2010. “Pittsburgh should feel very honored that she decided to stay.”

When the Crystal Bridges Museum of American Art in Arkansas decided to take a snapshot of American art by collecting works from across the country, the curators eventually found their way to Homewood.

“The experience of going to her studio was a moment that I will never forget as long as I live,” curator Chad Alligood says. He and his companions arrived at her door on a rainy fall morning. “She flings it open and she says, ‘Oh! You’re so cute! Get in here!’ And wraps me in a big bear hug. That sense of love and generosity? Of the thousands of artists we visited, no one did that.”

Crystal Bridges included three of German’s power figures in its “State of the Art” exhibit and arranged the sculptures on pedestals near a gallery exit to ensure every visitor would encounter them. Since then, the exhibit has been travelling the country, and at each stop it makes — in Georgia, in Minnesota — newspapers consistently have plucked German’s work from the many entries in the crowded show to give it special critical mention.

The past six months have been particularly busy for German. In December, she held a “Night of Illumination” to dedicate the permanent ARThouse space. In March, when NPR broadcaster Michel Martin came to Pittsburgh to emcee a forum on rebuilding American cities, German delivered a rousing, furious, exuberant and masterful eight-minute poem (swollen to 13 minutes because of continual applause) called “Lost My Cool at a Community Meeting.” In April, she finished a residency at Artists Image Resource with a collection of prints and collages and sculptures called “dontsaythatshitoutloud.” Her show at the Wadsworth, called “i come to do a violence to the lie,” adds a level of complexity by placing her power figures in a cavern-like installation, as though they were the excavated remains of an ancient civilization.

These artistic advances all come back to Homewood and to people everywhere who are living what she calls “ordinary sacred” lives. Whenever German holds workshops for adults, attendees tell her they long to be more creative. They feel powerless in the face of world problems. They look at German and see someone who continually turns those feelings into art. One man told her, “Well, you can think like that because you’re an artist. You can make a sign that says ‘Stop Shooting: We Love You.’ You can just say that it’s art. You can do that,” she says.

“Introspective” aims to show people how their own emotional responses can become art. German asks: “Why couldn’t being a generative human citizen mean that ideas that you have could have an impact in the world that we live in now?”

This article appears in the June 2016 issue of Pittsburgh Magazine.
Categories: Arts & Entertainment, From the Magazine, Hot Reads