Leo Plunkett, who attended Duquesne from 1934 to 1937, will receive an honorary degree. 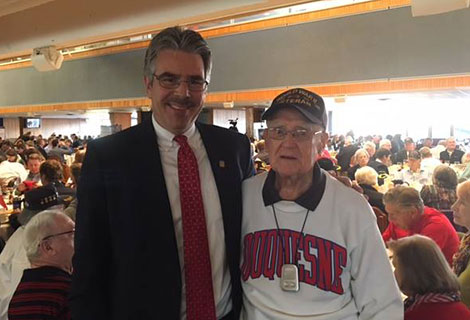 Among those set to receive a degree at Duquesne University’s winter commencement is a student who was a freshman while President Franklin Roosevelt was in his first term.

In his 100 years, which included service in the Pacific during World War II, Leo Plunkett has witnessed a lot of history. On Friday, he returns to Duquesne to make a little history of his own. He will become the oldest person ever to be awarded an Honorary Degree by the university.

“I’m overwhelmed, believe me,” Plunkett said in a release by Duquesne.

A native of Lawrenceville, Plunkett attended Duquesne from 1934 to 1937. He studied English, was a member of the Kappa Sigma Phi fraternity and served as a co-editor of the sports section of The Duke student newspaper.

“I can still remember the two big events, Duquesne winning the Orange bowl (in 1936) and senior Mike Basrak being the first player at Duquesne to be named an All-American,” he said.

When Plunkett enrolled, Duquesne was still in its early years as a co-ed school.

“It was such a wonderful atmosphere,” Plunkett said. “Everybody knew everybody, and the big meeting place was the basement of Canevin Hall, which was the cafeteria at that time. Everybody met there and socialized in between classes.”

For Plunkett, Duquesne has been an all-in-the family institution.

His late wife, Ruth, graduated from Duquesne in 1938 — although the couple did not meet until after he returned from serving in World War II.

They married in November 1947, exchanging vows in the Duquesne University Chapel.

“We always had such an affinity for Duquesne,” said Plunkett.

Plunkett’s son and grandson both earned master’s degrees at the university.

University President Ken Gormley will present Plunkett with an Honorary Degree of Humane Letters. About a dozen members of Plunkett’s family plan to attend.

Plunkett, who lives in Penn Hills, still attends mass every morning. He drives himself in a convertible, complete with a Duquesne University license plate. Plunkett is also a regular at the Penn Hills YMCA where Nancy Phillips, director for senior programming, calls him “an inspiration to every one of us, no matter the age.”

“He’s young at heart and he lives life,” Phillips told the Pittsburgh Tribune-Review.

Plunkett explains, in simple terms, the key to longevity.

“Keep active. That’s the big thing. Once you don’t, you slow down. Next thing you know, there’s a funeral,” he said. “I avoid funerals as much as I can.”