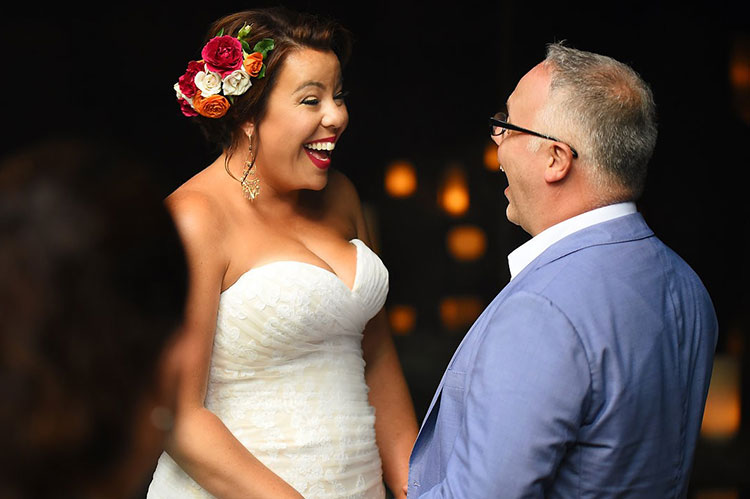 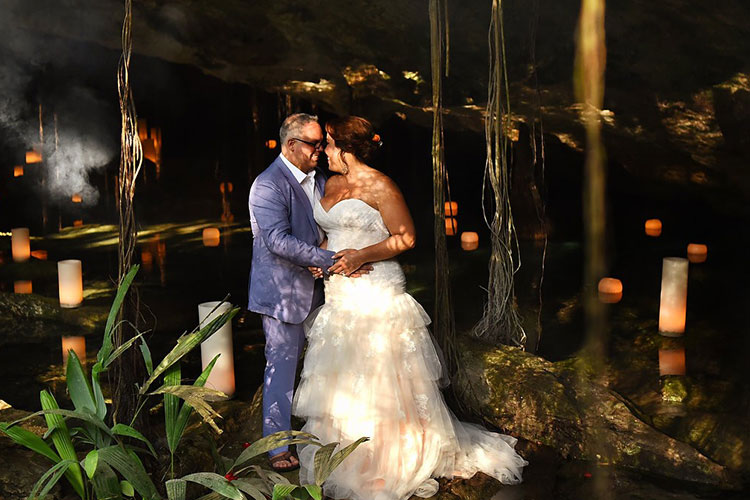 When Dax Met Cori.
As many a modern romance starts, Dax Parise met Cori Begg online. They arranged for their first date at Union Pig and Chicken in East Liberty, and Cori jokes she made an excellent first impression gnawing on messy chicken wings.

To keep the night going, the pair left for Ava Lounge, where Cori insisted she pay after Dax picked up the food and cocktails at dinner. Cori was shocked to learn her bill at the end of the night was only $10 for the two of them, so thinking she struck a rare deal, she tipped $20. Little did she know Dax had been paying the tab all along.

After returning to their separate homes that night, the couple talked on the phone until 2 a.m., despite the fact it was a Monday night and they had to work the next day. 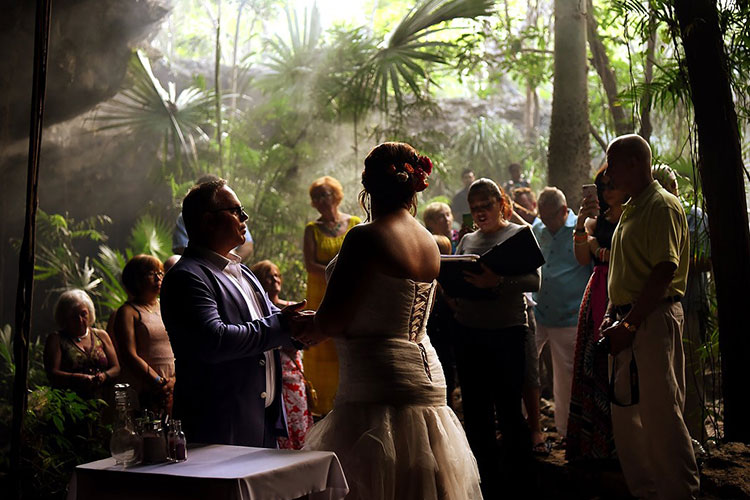 She Said Yes.
After dating happily for two years, Cori and Dax hit a rough patch and broke up. Dax regretted the split and spent months trying to win Cori back. During October, Cori’s birth-month, Dax sent a series of gifts to Cori’s office, culminating in a new Mercedes with a big red bow (he says he was scared she wouldn’t accept a ring). Eventually, they resumed communication and got back together.

A month later, as Cori was cooking dinner, stirring gravy in sweatpants in the kitchen, Dax asked if she wanted to see the ring he had bought. “No way, man! You can’t do it like that,” Cori told him.

He tried again at Tako, Downtown, since they share a love of Mexican street food, and this time Cori said yes. 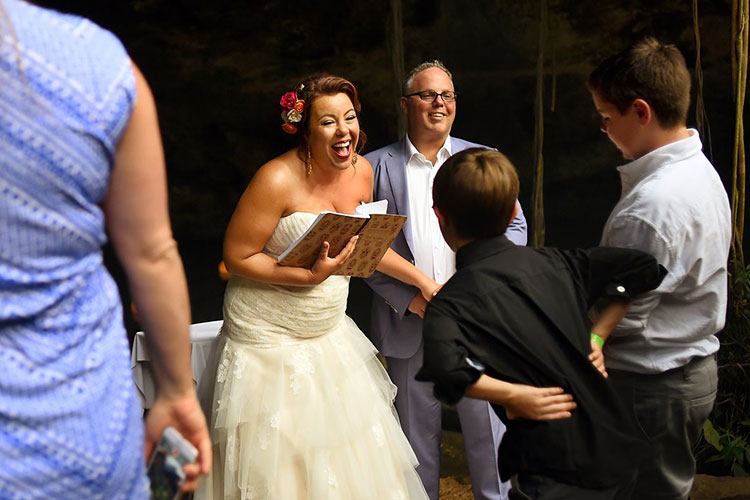 The Big Day(s).
Having gone to Mexico annually for many years, Cori says it had become a place that felt “less and less like going on vacation and more and more like going home.” She knew she wanted to hold her wedding there. In Mexico, you can have a civil, religious or spiritual wedding, and only a civil wedding is legally recognized. Since Cori and Dax wanted a spiritual wedding, they got married in Pittsburgh first in order for things to be legal.

They decided to get married at City Hall, and Cori says she wanted to go all out, so she put a call in to Mayor Bill Peduto. He agreed to marry them. Knowing she’d be wearing sensible shoes for the jungles of Mexico, she chose “ridiculous” heels for her Pittsburgh wedding and was setting off metal detectors all day with the large rhinestone embellishment and metal clasps for the gems. 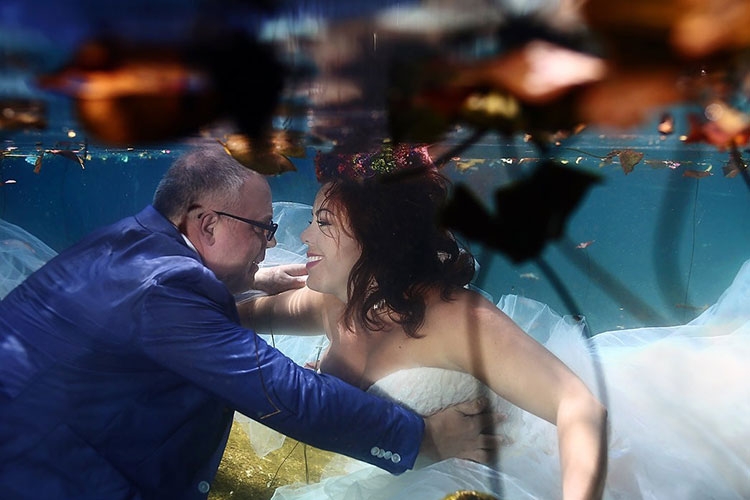 In Mexico, the pair married in a cenote, a natural sinkhole, which the ancient Mayans believed were very spiritual places. Their guests were led to the cenote by a mariachi band, then blessed by a shaman before the ceremony. Twenty-six guests looked on, and the owners of the cenote let their numerous dogs run around, per Cori’s wishes.

The day after their Mexican wedding, Cori and Dax returned to the same cenote with their photographer and participated in a “trash the dress” shoot, which involved synchronizing their breaths to take pictures underwater. Cori mused she liked the idea because, she says, “Why am I going to hang on to this dress when I can squeeze all the life out of it I can?” 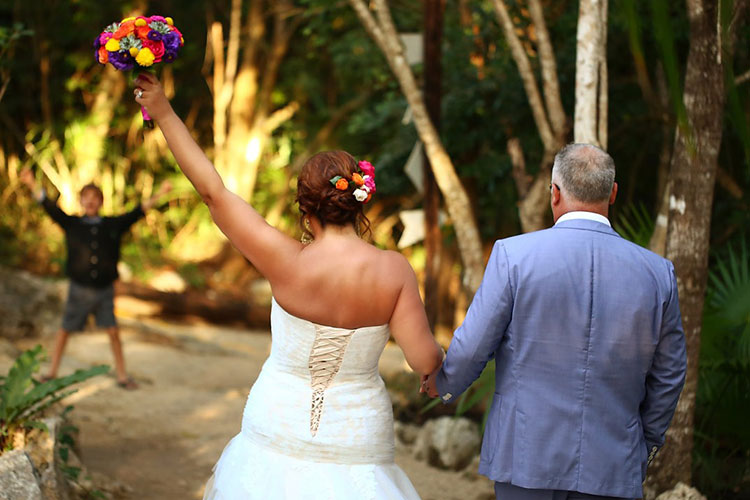 Happily Ever After.
In Cori’s vows, she addressed Dax’s two sons and told them while she had missed their first steps and first lost baby teeth, she’d never miss another of their firsts. She says she loves being a mother to the children, who are both very involved in soccer.

Cori, 38, works as a director of marketing and communications at the University of Pittsburgh School of Law. Dax, 42, is the partner/executive producer at Uppercut Studios and president of Veritas Legal Services.