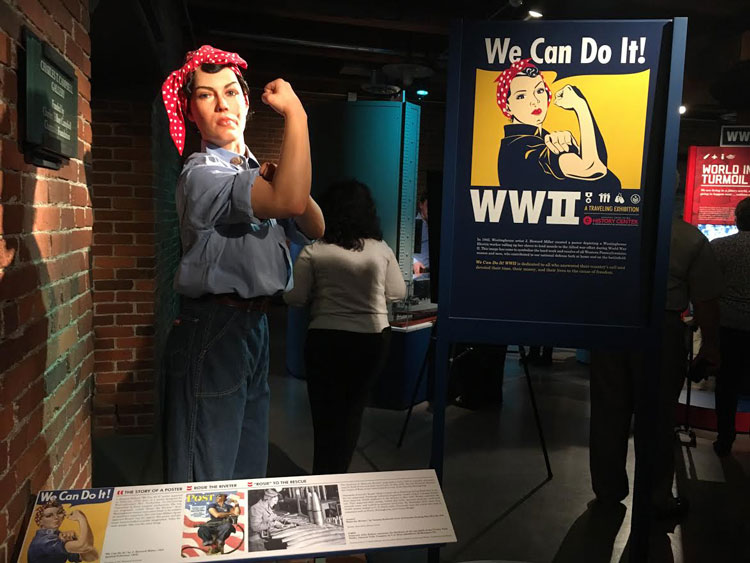 Whether you’re a history buff, jeep-lover or just a museum-goer looking for a Rosie the Riveter photo op, the Sen. John Heinz History Center’s new exhibit is sure to impress.

“We Can Do It! WWII,” a traveling exhibit on display at the Heinz History Center through this weekend, features the life-like figures of four WWII heroes from western Pennsylvania: General George C. Marshall, Tuskegee Airman Carl J. Woods, Iwo Jima hero Sgt. Michael Strank and Rosie the Riveter, a character inspired by the Westinghouse Company.

Modeled after the museum’s original World War II exhibit that opened in 2015, the traveling exhibit, which opened Friday, will be visiting 18 of the Heinz History Center’s 125 members of the History Center Affiliates Program over the next three years.

According to Andrew Masich, the Heinz History Center’s President and CEO, one of the most significant aspects of this exhibit is that it offers the opportunity to connect communities of western Pennsylvania with the larger history of World War II. “The war changed the world forever,” says Masich in his virtual tour of the 2015 exhibit. “It changed America in big ways, and here in western Pennsylvania, well, things would never be the same.”

Because many of these affiliated institutions are repurposed historical buildings with smaller spaces to display, the creators of the exhibit at the History Center had to condense a 10,000-square-foot museum exhibit into a 500-square-foot traveling exhibit. To make the exhibit adaptable to a variety of spaces and museums, curators Michael DuBois and Leslie Przybylek created smaller kiosk units, condensed from parts of the larger exhibit, to display information and artifacts from World War II, while also incorporating video and sound into some displays. 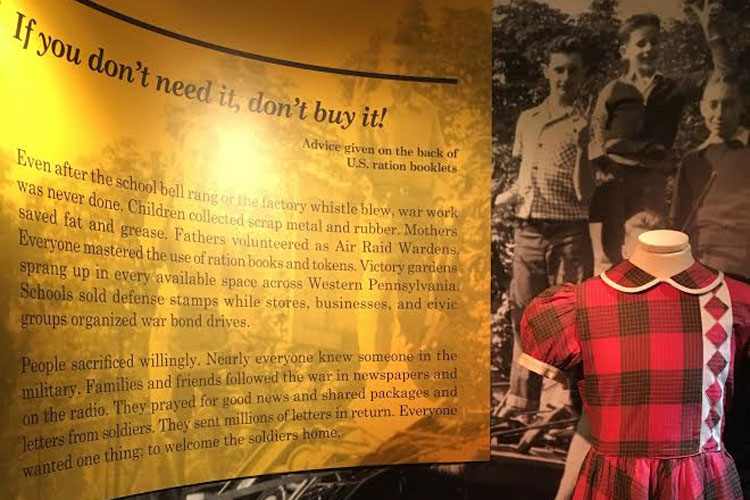 The exhibit’s displays range from information about the Women’s Army Auxiliary Corps to the inclusion of African Americans in the military, sparking the beginning of the Civil Rights Movement. Whether at home or on the battlefield, World War II was a war that affected everyone — with western Pennsylvanians playing a pivotal role in the efforts.

The original exhibit opened at the History Center in 2015 to coincide with the 75th anniversary of the invention of the Jeep in Butler. As a tribute to the crucial part the Jeep played in the war, the History Center will be loaning out a Jeep (from their second-floor exhibit) to some of the traveling sites.

The traveling exhibit’s next stop is the Beaver Area Heritage Museum, where it will be housed from April 22 through June 11. The Heritage Museum has hosted traveling exhibits from the History Center before and will be delaying its usual March opening until April to welcome visitors to the new exhibit. The museum will also be extending its hours to include Wednesdays because of the popularity of past exhibits from the Heinz History Center. 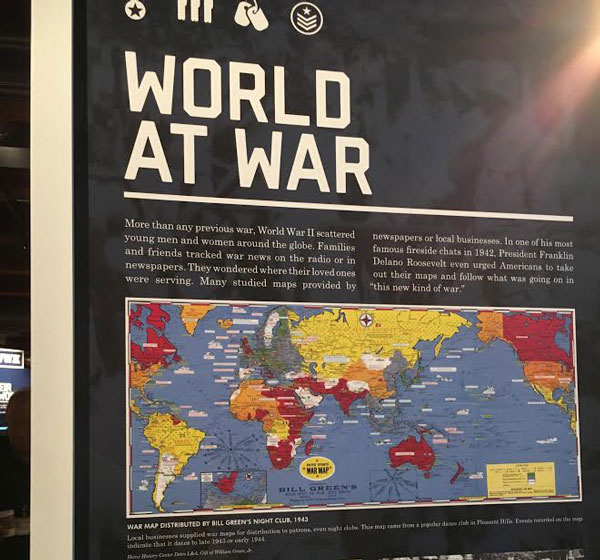 Affiliated institutions have the option of including their own artifacts in the traveling exhibition to show the impact of World War II on their own community. For example, the Beaver Area Heritage Museum may be displaying select papers from its Beaver County Times Anthology to commemorate the important dates of WWII.

The traveling exhibit will be staying at each of the 18 host sites for approximately six weeks, ending in 2020 — the 75th anniversary of the end of World War II.