Sophie and Carl tied the knot at hidden garden Choderwood in a personalized and special way. 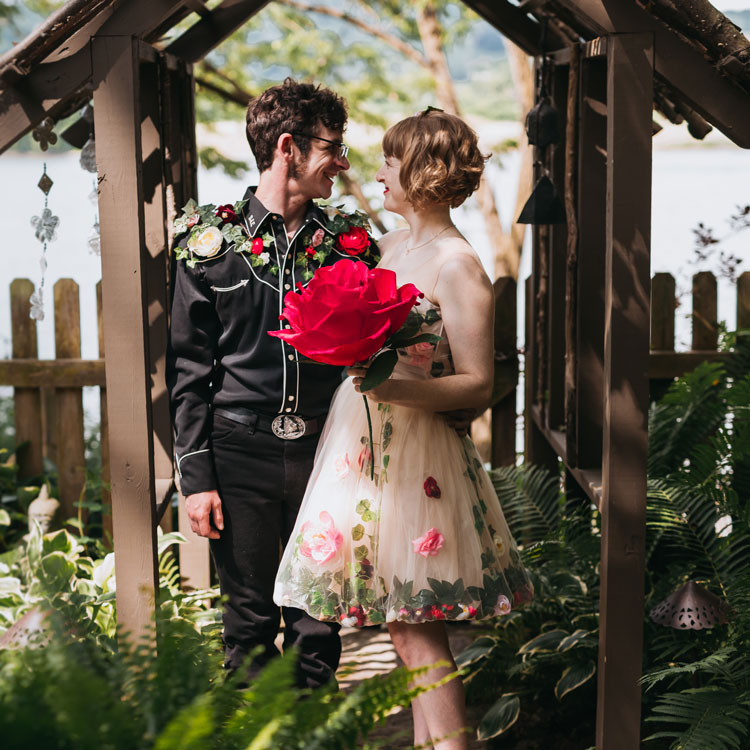 When Carl Antonowics first saw Sophie Goldstein, she was drinking straight vodka out of a teacup.

When Sophie first saw Carl, he was wearing a ladies suit.

Both were completely smitten from the start.

The couple met at a party during their two-three overlapping weeks as students at the Center for Cartoon Studies in Vermont. Carl knew of Sophie’s work on the webcomic “Darwin Carmichael is Going to Hell,” which she had been contributing to for about a year.

The couple really connected and stayed in touch when Carl moved back to Austin in his home state. As their relationship became more serious, Carl decided to move to Vermont so that they could be closer together. 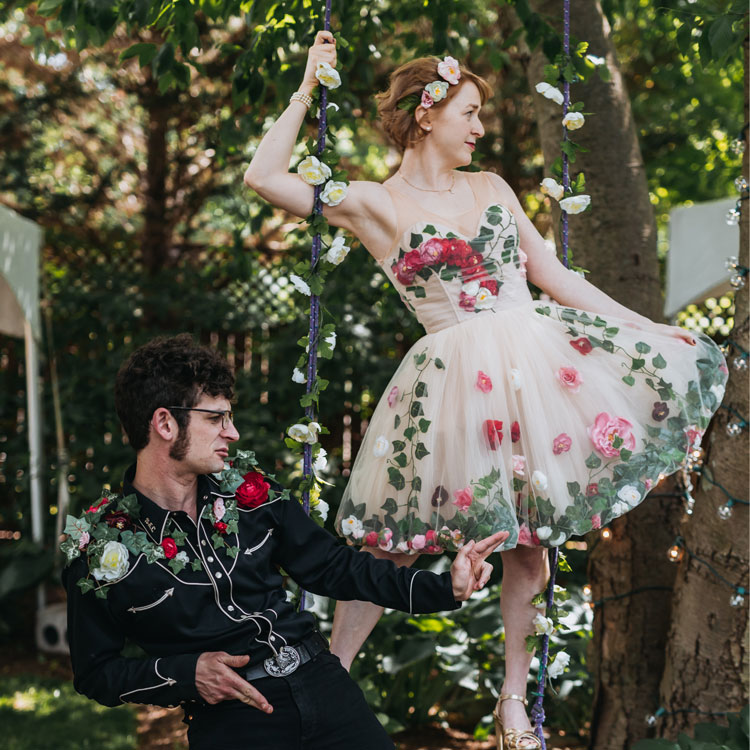 Five years later, after the couple had relocated to Pittsburgh, Carl decided that it was time to pop the question. They two went to Homewood Cemetery, located in Squirrel Hill, to look at the stained glass on the mausoleums. Carl told Sophie to walk up to the resting place of Sebastian Mueller, who founded Eden Hall Farm, and get a closer look at the glass. When Sophie turned around, Carl was on one knee.

Carl started reciting what he had prepared, “Yea, that we have walked through the valley of the shadow of death, and you have walked with me…” He had prepared more lines, but they both started crying, and he was unable to finish.

When planning their wedding, Sophie and Carl looked at big picture decisions together. Choderwood, located on the Allegheny River, was the first venue the couple looked at, and they both agreed that it was the perfect place to get married.

For instance, Sophie convinced herself that they needed fresh flowers for their big day. The couple ended up choosing artificial flowers from Michael’s instead. Sophie also worried that their wedding needed to have a theme, which Carl countered with, “We’re enough.” 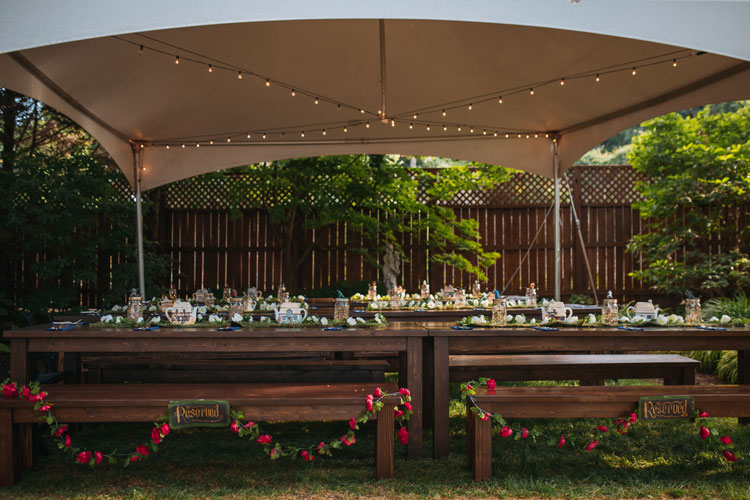 Sophie’s obsessions often helped out in the couple’s favor, though. After going through six years of meteorological data, Sophie determined that it would not rain on Sept. 2 and chose that day for their nuptials.

Together, the couple tried to eliminate stress by writing off the less important details. They decided not to worry about wedding favors. However, Sophie’s mom later decided to ask her friend to make custom bottles of hot sauce, which were handed out as gifts.

Sophie and Carl tried to personalize every detail of their wedding. When it came to the ceremony, the couple wrote it together, and their friend John was the officiant. Sophie and Carl both have step-parents, so a whopping eight people — mothers, fathers and step-parents — were included in the procession. Carl came in as “Some Kind of Wonderful” by Grand Funk Railroad played, lip-syncing the first verse, after which Sophie danced down the aisle with her father. 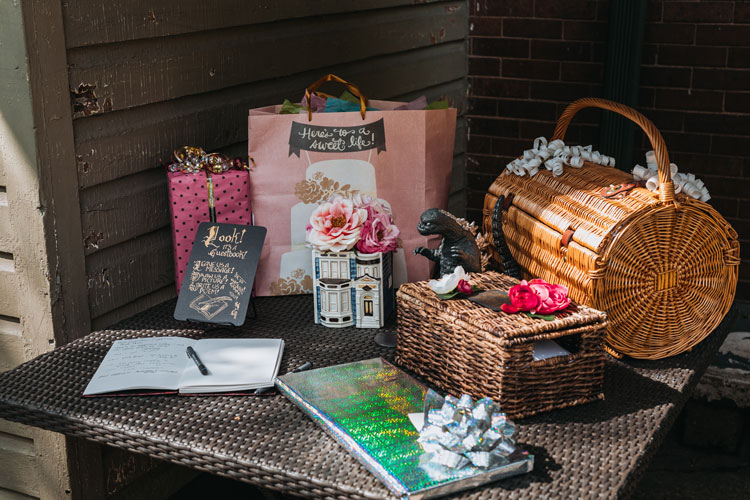 During the ceremony, Sophie and Carl recited their “Marriage Mission Statement.” The three to four-part statement, which emphasized the importance of trust and commitment, was calligraphed by Carl, and guests signed it as witnesses as they left the ceremony, where Sophie and Carl met them as a receiving line.

The couple’s clothing and decor were their opportunities to show off their style. Sophie’s favorite feature of their wedding day was Carl’s embroidered western shirt, which she assembled herself. Sophie says that Carl, a Texas-native, often wears western shirts and big belt buckles. Not wanting their wedding day to be an exception, Sophie purchased a plain black western shirt with white piping and sewed on flowers, which complemented her own look, an ivory dress with a flowered bodice and skirt. 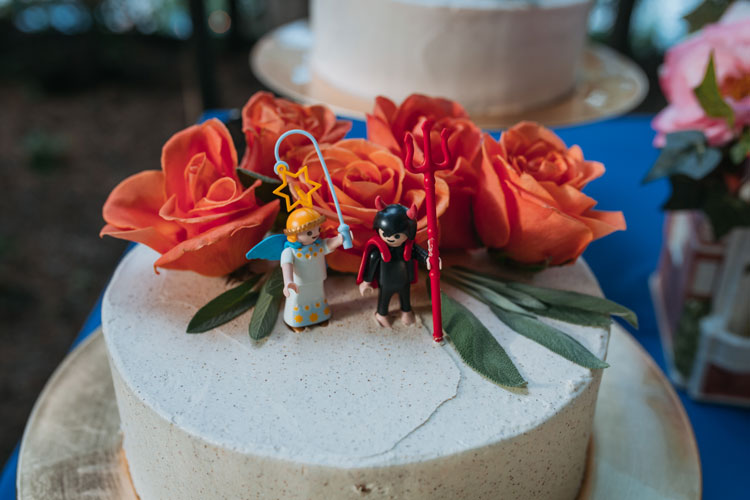 For the decor, Sophie and Carl had a hodgepodge of items that completed their fantasy-like feel. The couple used godzilla figurines — collected by Carl — and teapots filled with artificial roses set on moss table runners for their centerpieces. They decided to have five different cakes with five different toppers, including godzillas and garden gnomes.

Despite the focus on every decor detail, Sophie and Carl felt it was important to make the experience a fun time with families and friends. “Having fun is very essential to our relationship,” Carl says.

“It’s like when you get on a rollercoaster,” Sophie says. “You’re cranking to the top with all the preparations, and the whole day is coming down on the rollercoaster.” 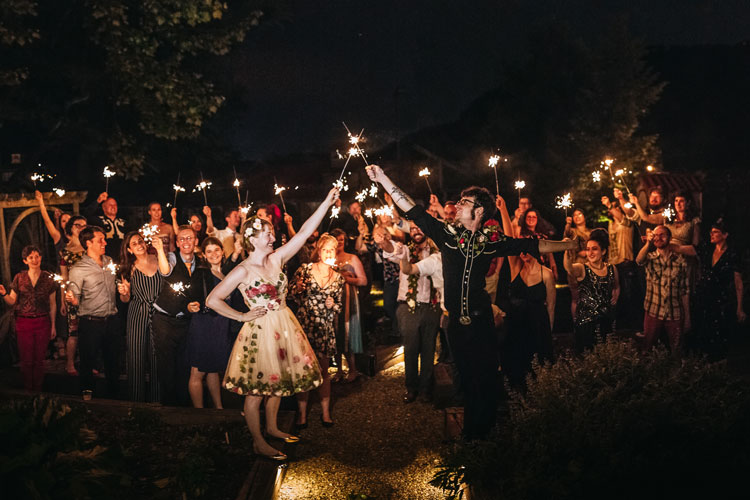 This article appears in the September 2018 issue of Beyond the Cookie Table.