Alex Da Corte’s installation at the Carnegie International combines architecture, light, sound and performance — and even Alex as Mister Rogers — with a dash of devilment.

Editor’s Note: Pittsburgh Magazine was granted behind-the-scenes peeks through the process of the installation of “Rubber Pencil Devil.” We previewed the piece here when the International opened and include the full piece that appears in our November issue below.

Alex Da Corte’s “Rubber Pencil Devil” (more about the name later) marks the artist’s monumental contribution to the 57th Carnegie International. This multimedia installation is not only one of the most visually spellbinding among the many offerings here, it’s also incredibly labor-intensive, requiring hands-on support from numerous assistants, with Da Corte working and overseeing as artist, auteur, wizard and châtelain.

In a cathedral of culture such as the Carnegie Museum of Art, Da Corte’s multimedia creation could be considered the aedicula. As such, “Rubber Pencil Devil” might seem more suited to the Hall of Architecture, but International curator Ingrid Schaffner has sited it wisely in seldom-seen Gallery D. There, the installation — one singular sensation — is ensconced by four white walls with just one path for access and egress: a newly created portal, resembling a cloister arch, incised into a wall. This dramatic design gesture adds an element of suspense, mystery and surprise.

This minimalist structure — 16 feet high by 22 feet long by 16 feet wide — has been constructed with aluminum beams and supports that rise to a pitched roof. Da Corte calls it a “skeleton of a house.”

Adding life to the bones, witness a palette of neon tubing, a material Da Corte adores, a staple in many of his Pop-like, color-rich installations. It entices like a theater marquee. “They can come for the neon, and stay for the show,” he says of the visitors who will soon arrive.

Neon highlights the door and windows and shutters of the structure, which charms in a magic surrealism like a Cotswolds cottage, sans thatched roof, including neon posies for flower boxes adorning windows. These elements do double-duty, like picture frames, highlighting seasonal elements also fleshed out in neon: cupids, jack-o-lanterns, a wreath and candles. 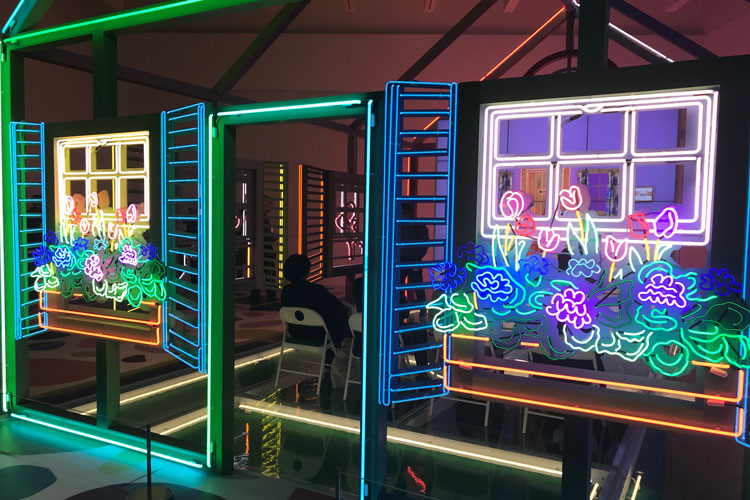 The interior is shrine-like, with a visual singularity at one end: a wall of TV monitors “stitched” together, which, through computer magic, create and project a single large image.

The monitors beam a three-hour marathon of 57 video vignettes created by and starring Da Corte in roles such as Sylvester the Cat, Petra von Kant, the Apple from Fruit of the Loom — and lest we forget: a devil. (There’s always something subtly Edenic about an apple and a devil.)

Also look for puppeteer Caroll Spinney and another legendary puppeteer, Fred Rogers, with a reprise of his puppets and the Neighborhood of Make-Believe. Da Corte has special affection for this local and national legend, and watched Rogers’ show when he lived in Pittsburgh for a time as a child.

Visitors process toward the monitor wall over a lighted glass floor; beneath lies green velvet and a pattern that references Martin Kippenberger’s “The Happy Ending of Franz Kafka’s Amerika” from the 1999 International. 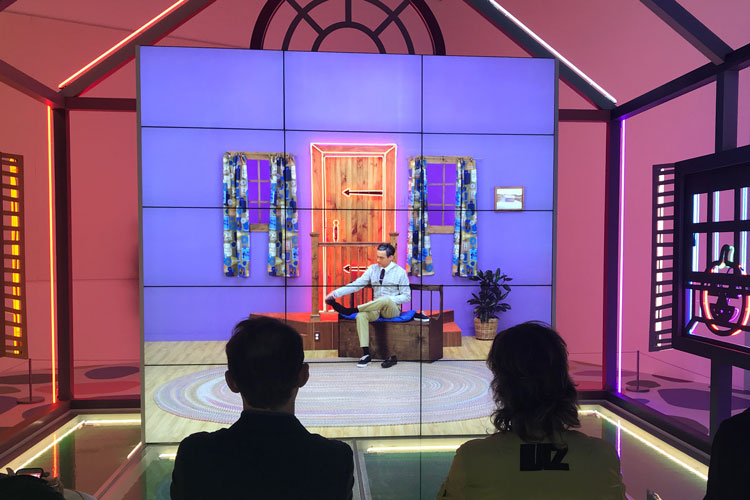 “Rubber Pencil Devil” was inspired by a visual trick — anyone can do it — by manipulating a pencil in the fingers with a legerdemain that transforms the object from a solid object into an undulating doppelganger.

Da Corte links the title and installation to the concept of After Image, a persistence of vision after viewing an object, and a corresponding relationship to time and space.

“We live in a time of After Image,” he says. “All things are connected to each other and reflections of thought and ideas before them.”

As a kind of cultural anthropologist, Da Corte talks about “unearthing contemporary artifacts to understand the things we do, to humanize the things we do, make them less distant — experience the everyday through a distant lens.”

Just 38, Da Corte, who earned a bachelor’s from the University of the Arts, Philadelphia, and an M.F.A. from Yale, has an impressive array of exhibition credits, including a show — “50 Wigs” — with personal possessions of Andy Warhol’s. Recently he directed St. Vincent’s video “New York.”
In his early 20s, Da Corte began seeing shows curated by Schaffner at the Institute of Contemporary Art at the University of Pennsylvania and admired her vision and style.

Schaffner returns the praise, stating: “Alex Da Corte’s work is an immersive, emotional experience of culture today.” He dovetails with one of the goals for the 2018-2019 International: “to experience joy.”

Joy with a dash of devilment. 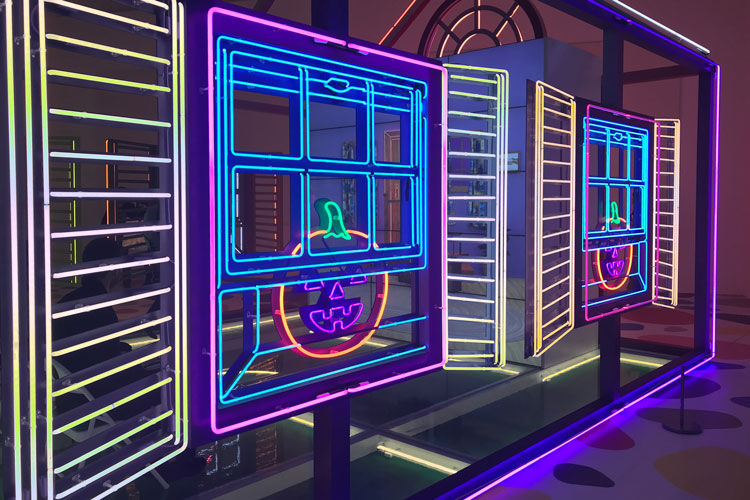