Tired of being underrepresented in the comedy scene, three local comediennes are set to launch an all-female variety group. 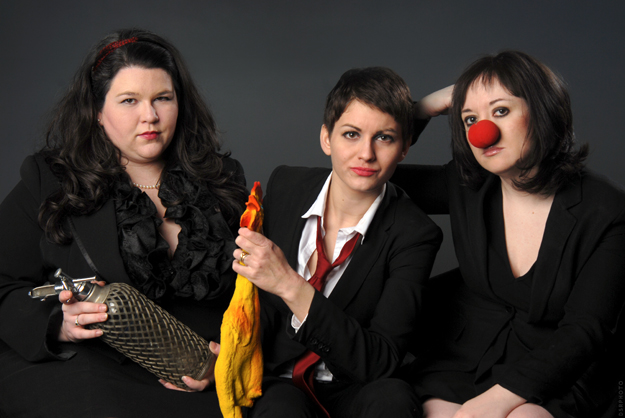 The explosive growth in Pittsburgh’s comedy scene has reached the point that people now know what you’re talking about when you refer to it. That is, the funny people of Pittsburgh have been able to graduate from simply insisting that Pittsburgh has a great comedy scene to actually being part of a thriving, diverse and often hilarious environment.

There are more stand-up comics, and more people know who they are. Podcasts and blogs are not only extant, but genuinely followed. The people dropping in on morning radio aren’t always familiar faces — genuine young people are getting in on the act.

And, perhaps most notably, the quantity of improvised and sketch comedy in Pittsburgh has skyrocketed. A few years ago, there was the seminal Friday Night Improv show at Pitt, and a handful of groups that performed on the outskirts of town, and that was about it. Now, there’s the full-time Steel City Improv Theater on the North Shore, frequent performances in the cultural district, and an entirely respectable number of groups, classes and aspiring improvisers and performers. It’s an impressive and welcome movement.

Yet one of the old inequities of comedy, in any form, persists. Whether it be a stand-up open mic, an improv show, or even an audience, women are sadly under-represented under Pittsburgh’s spotlights. It’s a cultural phenomenon not unique to our city or any one discipline, but it remains a very real problem.

So consider the appearance of an all-female variety comedy group, Frankly Scarlett, an important development. The trio, Abby Fudor, Robin Hitchcock, and Liz Labacz, represent a range of background, experience and focus. They united over a shared desire to prove that which should not need to be proven — that, yes, there are funny women in Pittsburgh.

“Being female is the exception to the rule,” Fudor says. “There are a lot of reasons for it, but one is very true — it’s the same thing as, you know, if little girls don’t see female astronauts, they don’t know that they can be astronauts. Being in the improv scene and gravitating towards funny people as friends, I started to notice that some of the funniest people I know are girls, but there’s some kind of disconnect with them getting up on stage.”

Inspiring greater diversity and encouraging aspiring funny ladies are secondary goals, though, to simply putting an awesome and diverse show together. About two-thirds of the performance will be sketch comedy, with improvised scenes and videos rounding out the hour. Fudor is quick to celebrate the opportunities in both sketch and improv for the members of Frankly Scarlett to show more range than they had, individually, in other outlets.

“And I can play a hilarious mother,” she jokingly boasts. “I just don’t want to always do it.”

Still, the group is quick to acknowledge that this is not an evening of defiance and fury. They’re all too quick to poke a bit of fun at their situation, and they report that yes, some of the filmed sketches even contain male collaborators.

More performances are forthcoming in the next few months (keep an eye on their Facebook group), but the trio is going all-out for their debut. If you haven’t experienced the new-and-improved comedy scene in these parts, I can think of no finer introduction than this show.