Canine Companions provides service dogs, free of charge, to adults, children and veterans with disabilities. Before a dog can help out, though, someone — like Bridgeville resident Jill Sabo and her family — needs to turn a rambunctious puppy into a service dog in training. 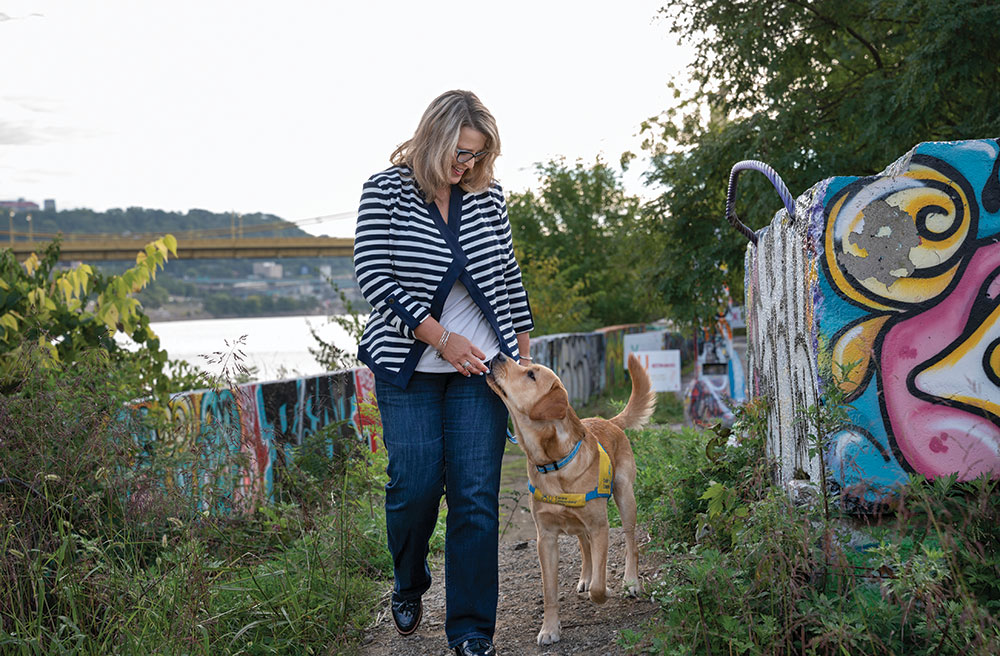 JILL SABO, OF BRIDGEVILLE, WITH SERVICE DOG IN TRAINING DONNY AT THE COLOR PARK ON PITTSBURGH’S SOUTH SIDE

When Coral arrived at the home of Jill Sabo in Bridgeville, she wasn’t quite ready to be a service dog — in fact, she wasn’t even housebroken. Fortunately, Sabo was prepared; for seven years, she’s always had a new puppy in the house.

Sabo’s a chapter leader with the Western Pennsylvania volunteer chapter of Canine Companions, a national organization that trains and places service dogs with adults, children and veterans with disabilities, free of charge. Sabo’s role is to begin the dogs on their journeys toward service, teaching them about 30 basic commands — and handling the normal puppy stuff.

“You only raise one puppy at a time,” she says. “You get them when they’re not potty-trained. Once they settle down, you start over again. It’s like constantly having a baby in diapers.” 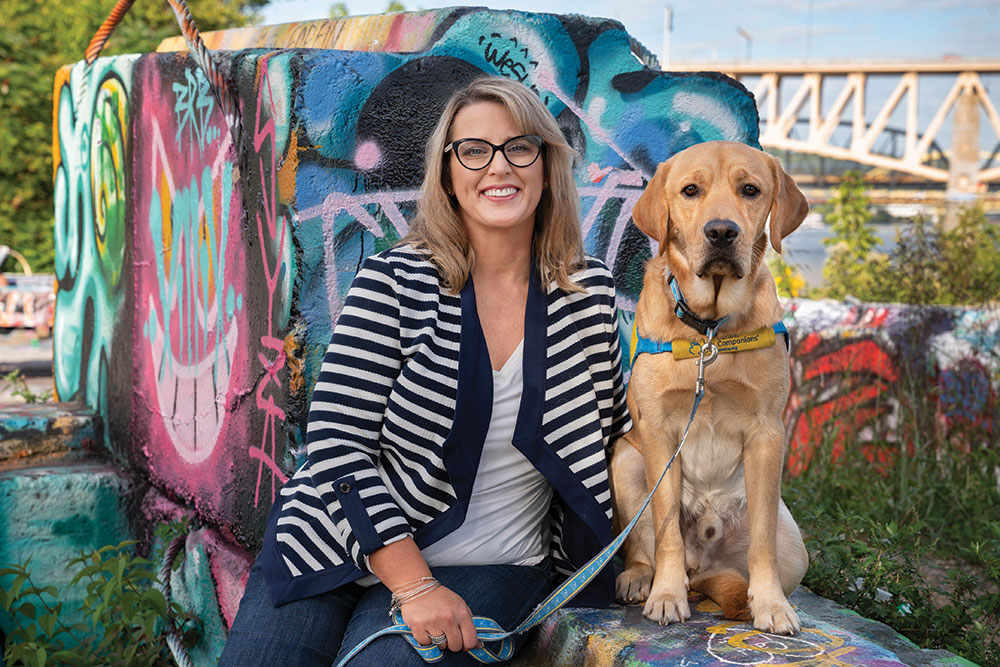 Once Sabo and her family had trained Coral, a labrador/golden retriever mix bred for service aptitude, the pooch attended a graduation ceremony and moved on to specialized training. Dogs can be trained to assist with more than 60 disabilities or specialize in aiding veterans with post-traumatic stress disorder; others can become hearing dogs. Coral was eventually placed with a boy who has a neuromuscular disease — fortunately, before the coronavirus pandemic began.

The boy’s mother “said how amazing it’s been to have Coral during the pandemic,” Sabo says, “because of the bond that they have.

“When you see a dog that you raised go with their new person, and they’re so happy, it’s something that you have to see to believe.”

Without assistance, the cost of a service animal can be prohibitive; Canine Companions estimates training costs $50,000 per dog from puppyhood through placement. For those who would benefit from a specially trained four-legged friend, Canine Companions taps into a nationwide network of volunteers to ensure that a trained pooch is on the way. 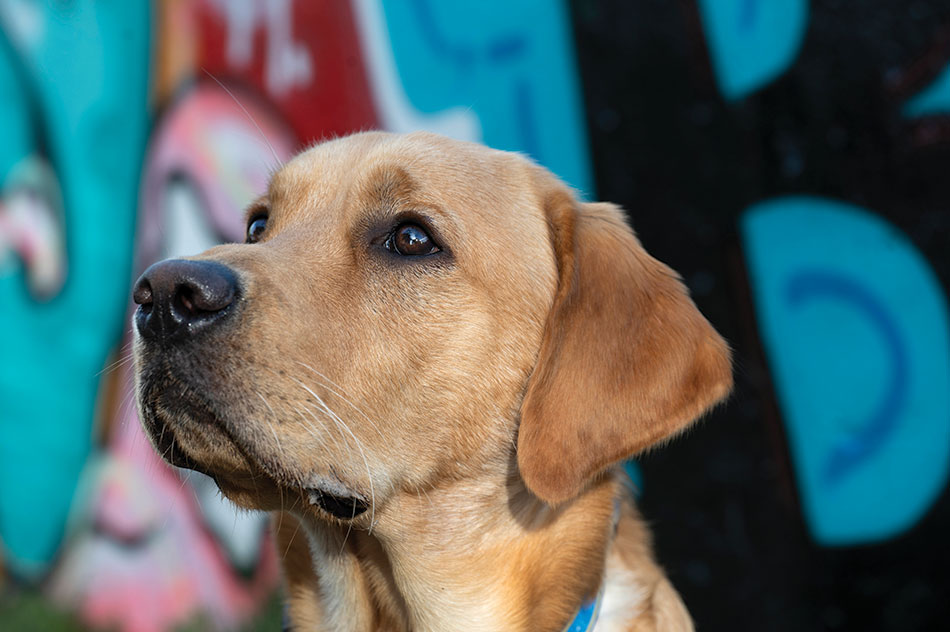 Since its founding in 1975, more than 7,000 “graduate teams” have been placed with an individual in need.

Even after a puppy is given its initial training by a volunteer like Sabo, there’s a long road ahead.

Volunteer puppy raisers keep a pup from the time it’s 8 weeks old until it hits 18 months; it then moves on to specialized training. At that point dogs are sorted by aptitude; only 52% of pups graduate at that level and are placed, Sabo says, while others are offered back to their first caretakers for permanent adoption; some become therapy dogs instead.

Coral, of course, made it through the program. So did Penguin, the next dog Sabo cared for; Penguin, however, became something of a TV star along the way.

Weekly updates on Penguin’s training and progress appeared on KDKA’s “Pittsburgh Today Live,” the result of a suggestion by former news director — and former Canine Companions board member — Kathy Hostetter. Each week, Sabo would update viewers on what Penguin had learned over the past week; the home audience watched as Penguin grew from a rambunctious puppy into a trained service dog.

Jill Neely, former producer of PTL, says working with Canine Companions was a no-brainer — especially after she saw a webcam view of the nonprofit’s nursery. “You could see a whole pile of puppies,” she says. “It was just adorable — you couldn’t go wrong.”

More importantly, Neely says, it was an opportunity to make people aware of the work Canine Companions was doing. “To follow their training and what a noble mission it is, it was just a fascinating story and a really noble cause. 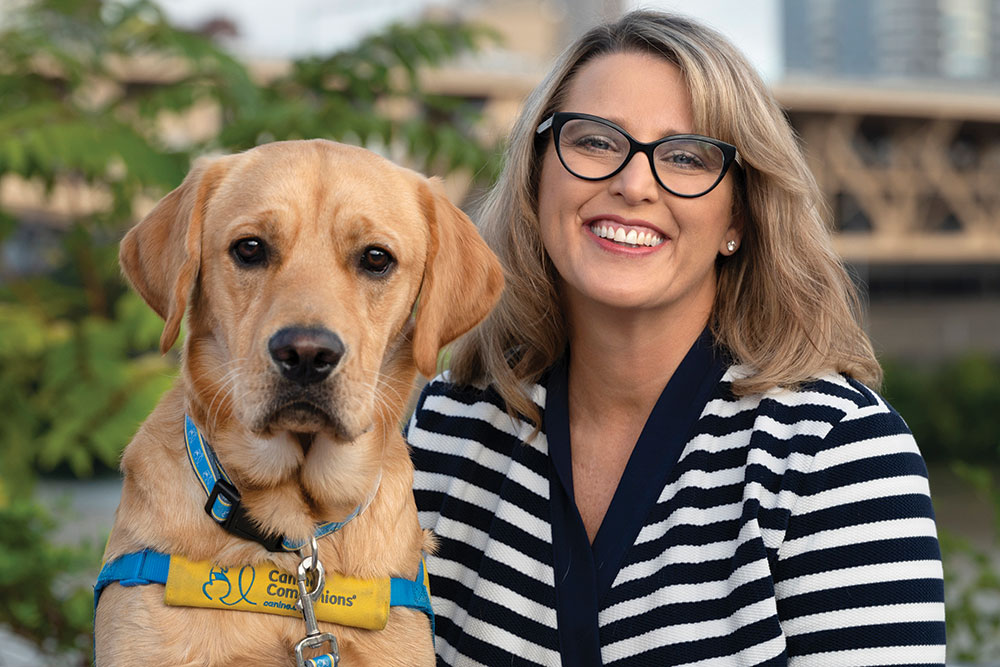 “What an incredible, collective effort to provide support to people that need it.”

Penguin has since been placed with a 37-year-old man with cerebral palsy. Penguin turns on light switches for him, opens doors and even sleeps in his bed to ensure he doesn’t roll out. The pair are quite active, visiting national parks together, so Sabo says Penguin “has a lot of fun in addition to helping.” Of course, it’s all fun for Penguin. “Dogs love to work.”

Other Canine Companions dogs might interrupt nightmares for those suffering from PTSD, serve as hearing dogs for Deaf individuals or even pull manual wheelchairs. The range of services they can provide, Sabo says, is remarkable — and Canine Companions provides lifetime follow-up to continue monitoring their dogs.

Of course, long before they become good dogs, they have to learn how to be good puppies — and Sabo is more than happy to continue training them. She’s got another lab mix, Donny, in the house; he just celebrated his first birthday. “He is learning his commands, learning to be calm when meeting people and other dogs — and loving his segments on PTL,” Sabo says, especially when his personal favorite, co-host Heather Abraham, is in the studio.

While there are daily joys — puppies can be fun to have around the house, even with the challenges of housebreaking — the eventual rewards, Sabo says, are much greater.

“To see the difference that a service dog makes in an individual’s life is so gratifying. It truly is life-changing.”

This article appears in the November 2022 issue of Pittsburgh Magazine.
Categories: Give Pgh