Can Steelers' Defense Keep Up With Its Offense?

It’s rarely the defense’s day when Ben Roethlisberger commands the proceedings the way he has been ever since he first reported for his 13th NFL training camp. 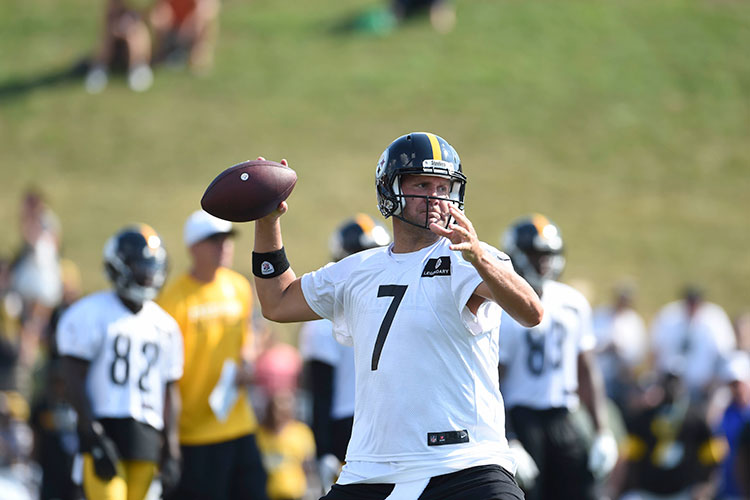 The defense dominated the first time the Steelers put the pads on at training camp, but there was an asterisk attached.

Ben Roethlisberger had the day off on Sunday.

The Franchise QB was back in action on Monday, and the practice dynamic shifted considerably.

This time, the offense was almost unstoppable.

What were the odds?

“We felt the effects of his presence,” head coach Mike Tomlin confirmed to the assembled media at St. Vincent College. “Sometimes, that’s got a lot to do with the ebb and flow.”

“That’s why I laughed yesterday when you guys suggested that it was the defense’s day,” Tomlin added.

It’s rarely the defense’s day when Roethlisberger commands the proceedings the way he has been ever since he first reported for his 13th NFL training camp.

Whether he’s been operating from an empty backfield and picking apart the coverage in the signature “Seven Shots” two-point conversion drill, discussing in meticulous detail what went right and what went wrong on a given practice rep with a receiver, or serving as the “dummy QB” in a pass rush/pass protection exercise, Roethlisberger has never been more of a presence for the Steelers.

He turned 34 on March 2, but there’s been no evidence at St. Vincent to suggest his best football can’t still be ahead of him.

For the Steelers, the rest isn’t just details but it’s still secondary to Big Ben.

The team Tomlin will lead into his 10th campaign in September isn’t without it’s issues.

Wide receiver Martavis Bryant has already been banished for at least a season and running back Le’Veon Bell is facing an impending four-game suspension.

The Steelers haven’t decided if they want their No. 1 draft pick from four years ago, linebacker Jarvis Jones, to stick around for another four or five more.

They have a couple of dominating defensive ends in Cam Heyward and Stephon Tuitt, but they’re not sure what they can trust up front beyond those two.

And they’re still trying to piece together a secondary capable of upgrading the defense enough to take full advantage of an offense that’s openly contemplating scoring 30 points a game.

That’s a lot to sort out between now and Super Bowl LI.

But the Steelers have long since convinced themselves that as long as they have Roethlisberger, they have a chance.

And there’s no end in sight to the annual regeneration of such optimism, especially when the pads are popping in August and anything seems possible.

“You know that light at the end if the tunnel? I know I can see it but it’s not real close in my mind,” Roethlisberger insisted.

For the Steelers, there can be no more encouraging revelation at training camp.