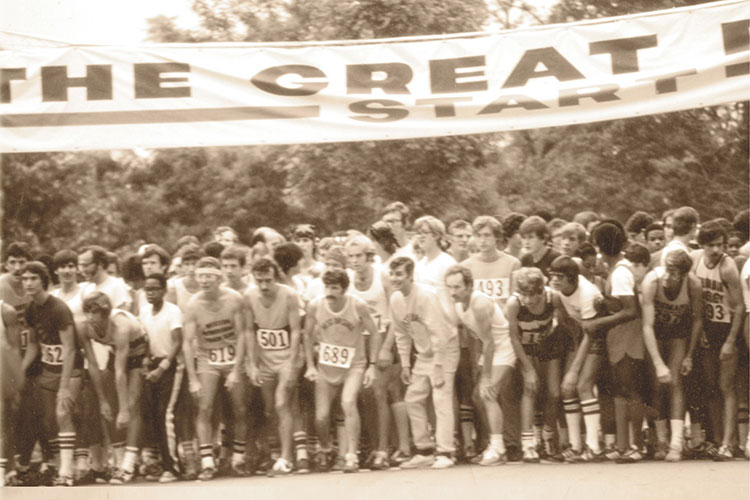 Late Mayor Richard Caliguiri (in track suit in front row) at the first Great Race in 1977.

In 1977, then-Mayor Richard Caliguiri created Pittsburgh's Great Race. When he died of amyloidosis in 1988, the Caliguiri Fund was established at the Pittsburgh Foundation. Since then, the Great Race has raised a quarter of a million dollars for the Caliguri Fund. Recently, the Pittsburgh Foundation announced the creation of a $2 million endowed chair dedicated to finding a cure for the disease that took Caliguiri's life at the age of 56.

The endowed chair, or research funding plan, will be named the Richard S. Caliguiri Endowed Chair in Amyloidosis and Heart Disease and is to be housed at the Heart, Lung, Blood and Vascular Medicine Institute at the University of Pittsburgh.

To begin building the research program, the Caliguiri Fund will provide $460,000 with an additional $275,000 coming from the Simeon M. and Katherine Reed Jones Fund at The Pittsburgh Foundation. Once the program is implemented, annual funds of $70,000 to $80,000 from the foundation will go to the research funding plan until $1 million is reached, at which point the University of Pittsburgh will make up the other half, completing the proposed $2 million plan.

The Richard S. Caliguiri Fund was established in 1988 and is committed to locally based research that works to find a cure for amyloidosis, a condition that leads to heart failure.

After Caliguiri's death, $1 from each runner's fees was earmarked for the Caliguiri Fund, an effort that has raised more than $250,000. Funding has come from many other Pittsburgh events, organizations and donations, and Caliguiri’s wife, Jeanne, says it’s important to keep the money in Pittsburgh.

“I know how Dick felt about Pittsburgh being known as a prominent center for medical research, and I know how much he wanted to keep the money and research here in Pittsburgh,” she says. “With this proposal, we’re able to take advantage of the advanced science, including better diagnosis and imaging of cardiac amyloids … I am so pleased that there is a strong philanthropic investment in Pittsburgh that promises great results.”

The endowed chair will fuel the research track into knowledge about amyloidosis and heart disease. Building of the clinical center for the program will begin later this year and continue into early next year. The program is being devised by Dr. Mark Gladwin, chair of the University of Pittsburgh's Department of Medicine, who is also working to find a scientific researcher specializing in amyloidosis to head the program.