Plus, Pitt student's website eliminates bookstore woes and high schoolers get a taste of robotics at RMU.

THE RENAISSANCE COMES TO CAL U 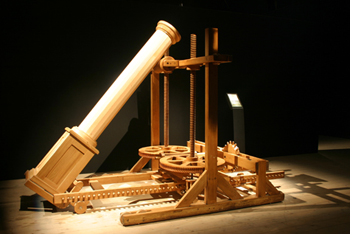 An armored car, a printing press and a working robot—all inventions that have seemingly very little to do with each other … or do they? Few people realize that these innovations and several others were actually conceived centuries before they were ever built, all by the same man: Leonardo da Vinci. Now, those who visit the Cal U campus will have the opportunity to interact with several of the original Renaissance man's designs.

"Leonardo da Vinci: Machines in Motion" will give visitors the opportunity to interact with 40 devices that da Vinci designed hundreds of years before their construction and implementation, such as a mechanical crane. And in lieu of modern implements, each piece was hand-crafted with tools and techniques available during the Renaissance era.

The exhibit is broken up into four sections, reflecting da Vinci's fascination with the four elements (earth, fire, water and air). In addition to recreations of his inventions, "Machines in Motion" will feature interpretive panels that display detailed explanations of each invention as well as da Vinci's own notes and drawings.
—Rob McCoy, PM Assistant Editor

PITT STUDENT CREATES SITE SO THAT PEERS CAN AVOID BOOKSTORE WOES
Google began as a research project, Apple got its start in a garage and Facebook began as an act of digital vandalism. In today's day and age, the world's largest online entities can get their start just about anywhere, and while most are aimed and gaining profit, a new locally based website is looking to put money back in its users' pockets.

Bookzingo.com, launched earlier this year by University of Pittsburgh senior Melanie Feldman and her brother, is a site dedicated to giving students better value for their used textbooks; it went live in July and is currently in beta.

Although it got its start in the Steel City, the service has expanded to the national level, with books available at such universities as Harvard and Stanford. And as of October, the site had 700 users from 15 institutions and offered 1,500 books—and is still looking to expand.

HIGH SCHOOLERS CAN GET A TASTE OF ROBOTICS AT RMU EVENT
Robert Morris University is looking to give local high school students the opportunity to get their feet wet in one of the fastest-growing industries in our tech-saturated world: robotics.

The university is set to hold the Southwestern Pennsylvania Regional Qualifying FIRST (For Inspiration and Recognition of Science and Technology) Tech Challenge on Feb. 11 in the John Jay Center. The event will give teams of local high school students the opportunity to work with a professional mentor to design, build and program robots to complete sports-related activities and tasks.

This year's competition, "Bowled Over," got its name from the bowling-associated tasks the robots will be programmed to perform. At the event, students will have the opportunity to qualify for the state-level competition. From there, they can qualify nationally to compete for one of 600 individual college scholarships.

This article appears in the December 2011 issue of Great Minds.
Categories: Great Minds