By the Numbers: Pittsburghers Are Anxious about Rising Gas Prices, War in Ukraine

Experts say increased demand as COVID restrictions ease and Russia’s invasion of Ukraine are to blame for a higher price at the pump. 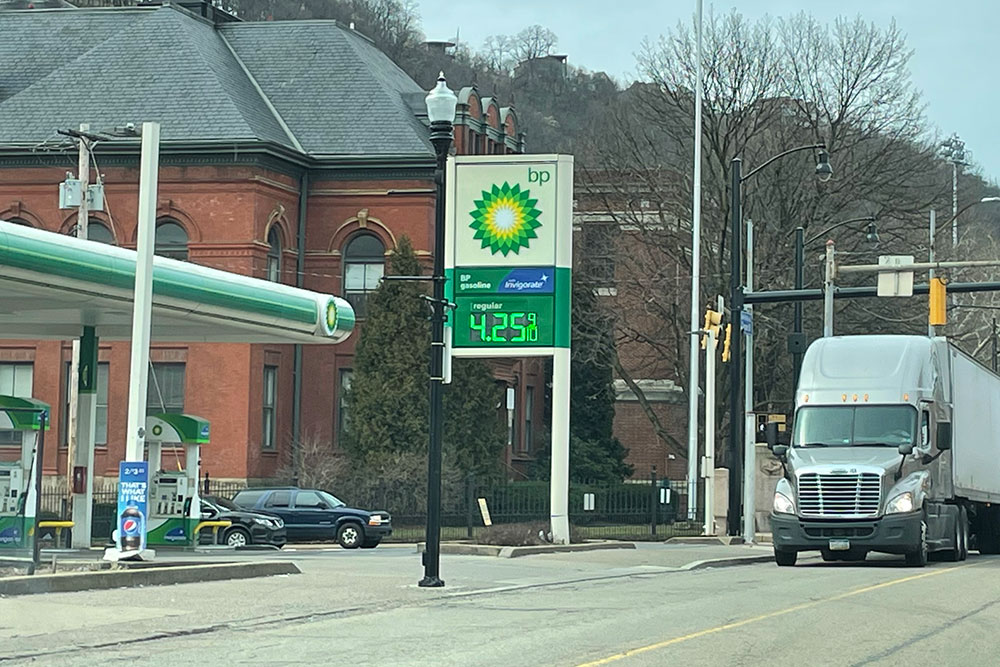 If you’ve noticed gas prices on the rise in your neighborhood, you’re not the only one. Many Pittsburghers noted higher prices at the pump this week, and experts say they may be here to stay.

The national average, according to AAA, is now $4.065 per gallon for regular fuel as of Monday, March 7. Pennsylvania is seeing substantially higher rates, with an average of $4.238 per gallon — a few cents more than the previous all-time high of $4.074, recorded during the recession in 2008.

The highest prices are situated in the southeastern part of the state and in Allegheny County, which is reporting an average of $4.222 per gallon.

The price hike has left some consumers feeling anxious that, even as the pandemic wanes, a new crisis is not too far off. In a newly released Civic Science poll, data show that 64% of Pittsburgh adults are concerned about rising gas prices in the Pittsburgh area impacting their household budget.

Officials at AAA and the Energy Information Administration warn that this is only the beginning; pump prices could continue to rise as easing COVID-19 concerns increase demand for petroleum and war in Europe causes the cost of crude oil to climb, too.

Russia is a large supplier of oil, representing 12% of global trade. With sanctions imposed after its invasion of Ukraine and a potential ban of crude imports from the country to the U.S. looms, prices will likely continue to rise.

“Like the U.S. stock market, the oil market responds poorly to volatility,” says AAA spokesperson Andrew Gross. “It’s an explosive situation, and a grim reminder that events on the far side of the globe can have a ripple effect for American consumers.”

The effects of the war continue to be felt throughout the Pittsburgh region. The majority (69%) of Pittsburgh adults said they’re “very concerned” about the war, with 25% reporting that they’re somewhat concerned and only 6% claiming they aren’t concerned at all.

Higher prices at the pump are just one reminder of the interconnectedness of the world’s economy. Oil refineries around the U.S. slightly increased their capacity last week, as the price of crude oil reached a 14-year record high at more than $116 per barrel.

Despite the recent surge in popularity of all-electric vehicles such as Teslas, most Pittsburgh adults (83%) still own gas-powered vehicles. In fact, only 3% said they own a fully electric vehicle, and only 6% own a hybrid.