Brent Povis Believes in Board Games and Says So Should You

He’s the mind behind the internationally sold Morels and Agility, two board games he designed from the ground up and self-published from his home in Squirrel Hill. 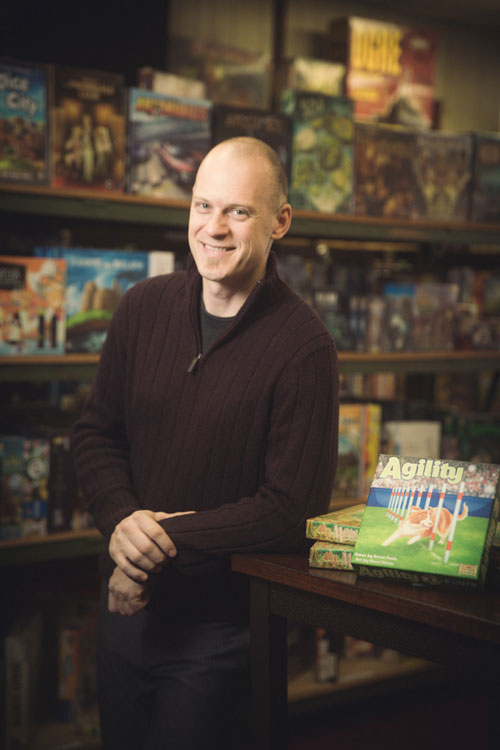 Brent Povis has enjoyed playing board games throughout his life. When he was growing up, his family played one or more almost every night of the week.

“[Board games] were just a staple of existence,” Povis says. “And, truth be told, I never would’ve dreamt that there was a family that didn’t do that.”

So it should be no surprise that Povis, 37, became a board-game creator. His first game, Morels, a two-player card game in which players gather and cook mushrooms in order to beat their opponent, made its debut in 2012 with a first printing of 2,000 copies. Now, the game is available on Amazon and in more than 1,500 stores worldwide.

When Povis turned 33, his wife threw him a mushroom-themed birthday party — that year marks a hobbit’s coming of age in “The Lord of the Rings” saga. After the party, Povis and his wife, Kaleen Tison Povis, started gathering their own mushrooms, and Povis had a “midnight bolt of inspiration” that led to the creation of Morels.

Unlike many designers, Povis develops the theme and the mechanics of his games in tandem. For him, the theme is a defining characteristic of a game. “The whole beauty of Morels is that it’s something unique, and it’s something people respond to,” Povis says. “I think it’s gotten a lot of gamers into mushrooms, and a lot of mushroomers into games.”
Povis, who self-publishes his games under the brand Two Lanterns Games, plans to release his second offering this month. Agility was funded by a Kickstarter campaign last fall that raised close to $30,000. It’s a two-player race game with dog agility as its theme.

​Povis prefers to focus on brick-and-mortar game stores, although his games also are sold online. One of the first stores to carry Morels was Games Unlimited in Squirrel Hill; he still hand-delivers copies there. “I think that’s what board games are about; it’s about that face-to-face quality, that coziness, that intimacy,” he says. “That’s what I was trying to capture with Two Lanterns Games.”

What was the process of creating Agility?
Agility basically started with the seed of the theme. I knew I wanted to create something with the theme of dog agility. It’s untapped. [My wife and I] have had a blast going to [dog] events, and we’ve been taking my daughter to events. We don’t [have a dog], but I’ve always wanted one … We will have one eventually; I think we’re focusing on raising one species at a time right now. I typically won’t touch a genre of game that I think has already been perfected … and I didn’t feel like there was a perfect two-player race game out there. There are some good ones, and I’m not trying to slight those, but I didn’t feel there was a perfect one, so that’s my goal with Agility. And I’m not saying you’re always going to hit that goal, nor that I hit that goal — people will have their own ideas about whether I did or not — but I think it’s good to have a lofty goal in mind.

What inspired the name “Two Lanterns Games”?
To put it simply, that was young love. My wife and I, we were big into hiking, and we had some romantic early dates. I remember one was in a firefly-filled field in North Carolina at a little bed-and-breakfast with a little lantern on the hook outside. So [I became interested in] this concept of lanterns, and this old-fashioned feeling as well. I’m an old-fashioned game designer; you’ll notice that neither of my games [is] techy, which is big. The really popular game themes are going to be space, zombies, computers and things like that. But I tend to do more outdoorsy, family-friendly type fare … We [Two Lantern Games] have a four-point creed, and one of the points is that our games will make you feel like you’re sitting fireside in an 18th-century tavern.

How did you first get interested in game design?
When I was a kid, my father enjoyed tinkering and designing — not any formal type board games but variations on board games. He would often modify games — that’s called homebrewing in the board-gaming world. I would do that too, and that seed of game design was planted pretty early. It was something that was latent for a little while until I met my wife-to-be back in 2007, and we started playing a lot of games together.

This article appears in the May 2016 issue of Pittsburgh Magazine.
Categories: Business