Break It Down: Pittsburgh's Most Slippy Time of the Year

A by-the-numbers (and nomenclature) look at winter weather in the 'Burgh. 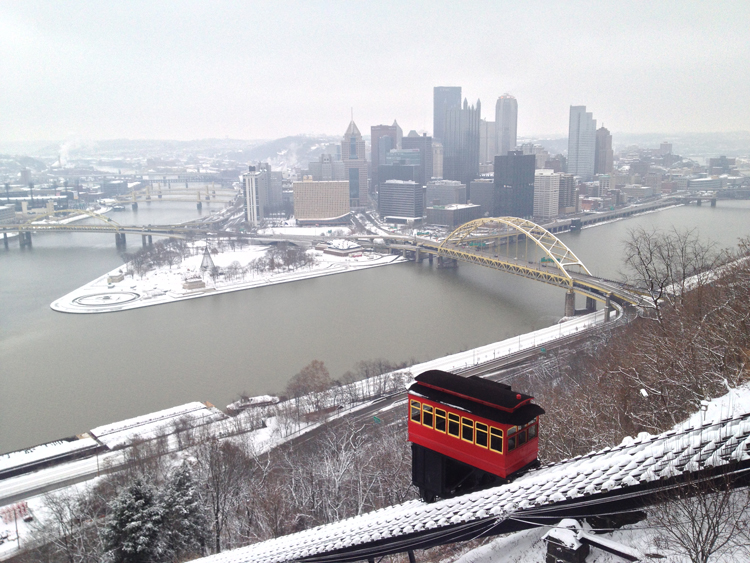 This article was originally published in January 2016.

Western Pennsylvania precipitation is like laundry: Just when you think you’re done with it, there’s more to do. Even if it took a while to arrive, winter is here. We thought it was important to put these months into perspective — let’s Break It Down (so it doesn’t break you).

The number of hours it can take crews working around the clock to fully treat the city’s more than 1,200 miles of streets after a heavy snowfall.

Which streets are cleared when depends on how they’re rated — those with the highest volume of vehicular travel get priority.

The average annual snowfall, in inches.

Earliest and latest snow in Pittsburgh: In 1989, the first snow fell on Sept. 23. In 1893, it was still snowing in the region on the final day of May.

Much of the salt that keeps roadways passable in this region is brought on barges from a mine in the Pelican State.

The amount of time after accumulation that city of Pittsburgh residents have to clear their sidewalks, before a flurry of citations can ensue.

The percentage of local “White Christmases” throughout the past 125 years — that is, times when at least one inch of new snowfall has occurred on Dec. 25.

A plow is a large, heavy piece of machinery that is moving wet, dangerous materials — while also spewing materials to counteract the wet and dangerous ones. PennDOT advises not passing plows unless absolutely necessary.

Not just a wild form of throw-yourself-in-the-snow fun, but also a way to help your neighbor: Volunteer to shovel the walks and driveways of residents who cannot at alleghenysnowangels.org.