Break It Down by the Numbers: St. Paul Cathedral

The cathedral is home base for the Pittsburgh diocese’s more than 600,000 Catholics. 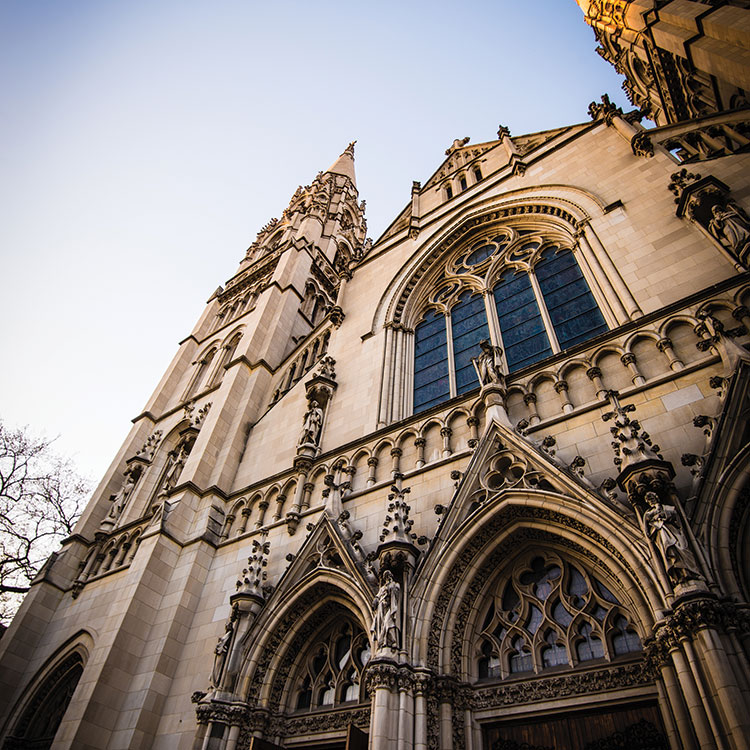 St. Paul Cathedral sits between the University of Pittsburgh and Carnegie Mellon University on Fifth Avenue, its two spires peeking out over the roofs of nearby buildings.  It often finds its way onto lists of the city’s must-see architectural marvels — and with vaulted arches, stained-glass windows and a historic organ, it’s no surprise that tourists and Pittsburghers alike stop to admire its beauty. But there’s more to St. Paul than meets the eye, so let’s break it down.

3,000
The number of parishioners served by the parish, although the cathedral can seat only about 1,500 at one time.

5,000
The number of pipes in the organ, which was built by renowned German organ builder Rudolf von Beckerath. Music students from around the world come for the chance to play the nearly-38,000-pound instrument.

186
The number of stained-glass windows in the Cathedral. The lower windows were manufactured in Munich, Germany, and tell stories on topics ranging from the Old Testament to the history of Catholicism in Pittsburgh.

1843
The year Pittsburgh was named the seat of a Catholic diocese and St. Paul was consecrated as its Cathedral (where the bishop keeps his offices). This makes St. Paul home base for the diocese’s more than 600,000 Catholics.

4,000 lbs.
The weight of the heaviest bell in the Cathedral’s tower; two others weigh 2,000 and 1,200 pounds, respectively. They’re dedicated to the three Archangels, Michael, Gabriel and Raphael, and they’re rung every day to summon the faithful to prayer and to announce special celebrations and events.

167
The number of weddings performed last year at St. Paul. Weddings can’t be booked during Lent, so there were weekends when as many as three wedding parties made their way through the Cathedral.

1906
The year of the building’s dedication, after St. Paul moved from the corner of Fifth Avenue and Grant Street to its current location in Oakland. Henry Clay Frick bought the former, Downtown property, and the bishop thought Oakland had potential for great growth.

247 feet
The height of the Cathedral, with a statue of St. Paul mounted on the center pediment marking the top.