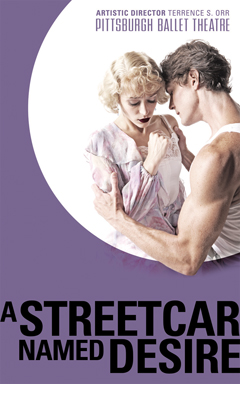 Brando It Ain't: Pittsburgh Ballet Theatre's Streetcar
Tennessee Williams’ immortal A Streetcar Named Desire has already been adapted into one of the most iconic films of all time, an opera and a truly hilarious parody musical featured on an ancient episode of “The Simpsons.” So why not turn the sweaty New Orleans drama into a ballet? Choreographer John Neumeier’s adaptation uses the medium to give even more life to Blanche Du Bois’ descent into madness.

The Pittsburgh Ballet Theatre has the distinction of being the first American company to perform Neumeier’s work. PBT will only be performing this can’t-miss show three times, so don’t miss out!

My Personal Concert Calendar
Ordinarily, I scan the upcoming concert calendar for a wide variety of shows, large and small, to appeal to all tastes. In the name of a Spring Concert Preview, though, I’m just telling you about the shows I’m going to. After all, Pittsburgh has become a city with a worthy show or two every night of the week; an actual list of everything coming up over the next three months would be thousands of words long and utterly unreadable. Let’s just go with what I like, OK? Find out about my record collection (and why you should buy some tickets as well) in this week’s edition of After Dark!

It's an Early St. Patty's Day at Calliope
You’ll be able to get your fill of fiddles and flutes next Saturday, but why not kick off your Celtic merriment a week early? Calliope brings international Irish superstars Dervish to the Carnegie Lecture Hall this weekend. Offering a glimpse at the musical traditions of Ireland’s western counties, Dervish offers the most authentic Gaelic sound you’ll find in the 'Burgh all month — and one of the most raucous you’ll discover outside of the pubs of Galway. They’ve shared the stage with the likes of James Brown, Sting, R.E.M., Beck and many more; world-class doesn’t even begin to describe them. Slainte!

In Theaters This Weekend: New films coming to Pittsburgh this weekend include Disney’s answer to Avatar, the much-hyped John Carter; indie ingenue Elizabeth Olson taking a horror turn in Silent House; and Eddie Murphy continuing to forget what makes him funny in A Thousand Words. PM Film Editor Sean Collier will appear on the 102.5 WDVE Morning Show Friday at 7:15 a.m. to review John Carter. Yes, he normally reviews two movies in a given week, but the sheer IMAX-enhanced scope of John Carter, not to mention its running time, exhausted him. Tune in to 102.5-FM or DVE.com for Sean’s review!

Tonight at Heinz Field, support the Muscular Dystrophy Association at Muscle Team. At this high-profile event and specialty auction, top professional athletes are paired with a MDA Goodwill Ambassador. Click here for more.