Can Mayor John Fetterman resurrect the gritty metropolis that was once left for dead? 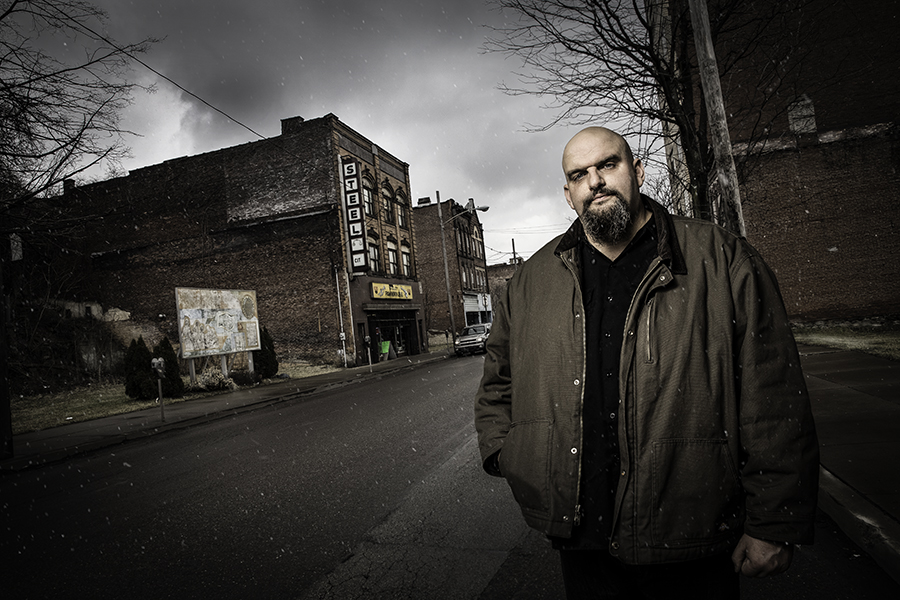 Pop. Pop. Pop. To John Fetterman’s experienced ear, the noise ricocheting down Library Street in Braddock sounded like shots from an assault weapon. So he pushed his 4-year-old into the house, dialed 9-1-1, jumped in his truck with a shotgun and sped in pursuit of a man running up the block.

Fetterman, the mayor of Braddock since 2006, isn’t technically a policeman. But he has earned a reputation for blunt, direct action to revive a neglected town.

“There was a shooting in that area in the past year,” he explained a few weeks after the January incident. “I am the chief law-enforcement officer — I can appoint police in case of emergency. I don’t know if it was brave; it was a split-second decision — but look at the horrible shootings where first responders [arrived] too late.”

The runner Fetterman stopped was unarmed, and the ensuing news reports questioned whether the mayor had overstepped his role. But Fetterman and the people of Braddock are rewriting the rules about how run-down steel towns change their luck — and they have an army of politicians, artists and activists behind them.

This Monongahela River metropolis, positioned 10 miles east of Pittsburgh, was once the symbol of the wealth that industry could bring: a belching steel mill, a clutch of soaring churches, a bustling main street and a population greater than 20,000.

Currently, just 2,300 residents live in the town where redevelopment has continually taken two steps forward and one back. While Braddock works to emerge from bankruptcy, a former borough manager is convicted of embezzling city accounts. Derelict lots are cleared — then the hospital closes. New owners buy a landmark building but can’t get electricity.

In Braddock, spring’s been just around the corner for 30 years.

“People don’t understand how much adversity there is here. It’s extraordinary,” says Fetterman, who came to town in 2001 to run after-school programs for youth. “So many people end up on margins of society for good. [The answer isn’t] just hard work and pull yourself by your bootstraps.”

But hard work does help. Next to the mayor’s home, a sidewalk sandwich board announces that Braddock Community Café — the town’s first eatery in decades — has opened in the Nyia Page Community Center. Refurbished in 2010 with the help of the Levi Strauss & Co., which adopted the gritty aesthetic of Braddock for a national promotion, the former church sports a new stained-glass window.

On the former site of UPMC Braddock, bulldozers are preparing for a new office building with long-term tenants. Some 40 vacant lots have been claimed for new housing. And local food devotees are praising a plan for a forthcoming restaurant from chef Kevin Sousa, whose cutting-edge solo project Salt of the Earth has thrived in revitalized Garfield since opening in 2010.

“We’re not next in line for boutique hotels and Whole Foods,” he says evenly. “Our issue is abandonment, not gentrification. We define success as holding on for the next eight seconds.”

To call Fetterman the poster child for Braddock’s resurrection would be misleading. At a bulky 6’9”, he’s far from childlike, with a shaved head, beard and tattooed forearms inscribed with the dates of local murders. But the 43-year-old York native has received national media attention for his outspoken belief that art, artists and unconventional ideas can revive a town. Recognition from Rolling Stone, The Atlantic, The New York Times and even “The Colbert Report,” to mention a few, has given him an image that led to outsiders like Levi Strauss supporting Braddock.

But the publicity also gave way to the town becoming the home of a recent movie production, scheduled for an October release. And as the founder of Braddock Redux, a completely volunteer-run nonprofit with green tendencies and a focus on youth and the arts, Fetterman holds some master keys to the area’s redevelopment. 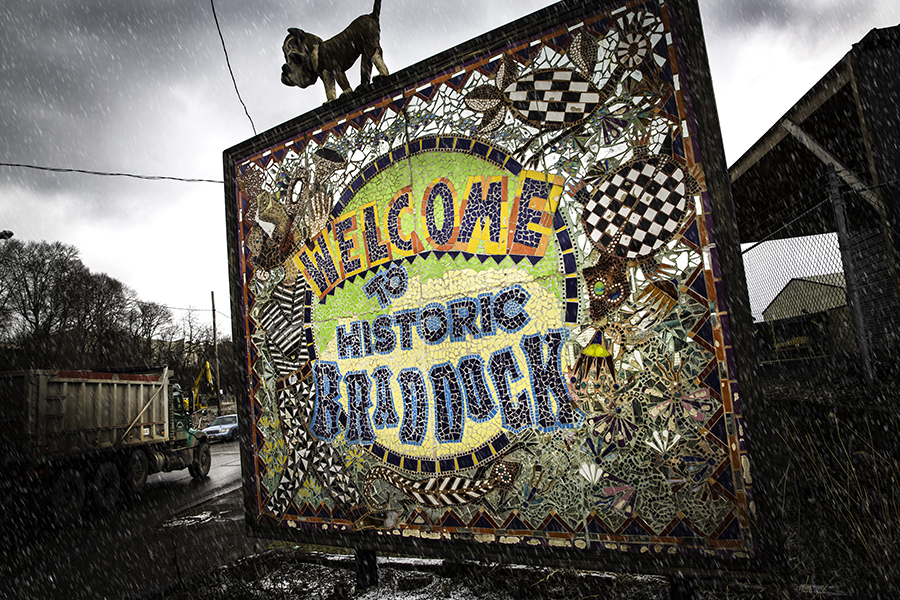 Though resident Jovan Villars, 31, is proud of the strides the town has made in safety and services since his childhood, he recognizes that challenges remain. Today, more than 40 percent of Braddock’s household incomes are below the federal poverty line of $23,050, and the percentage increases for families with children at home. Woodland Hills School District, which serves Braddock and 11 other communities, has struggled with attaining consistent academic success at all district schools. Although the municipality will mark five years without a murder in May — a credit Fetterman says he shares with various law-enforcement partners, including District Attorney Stephen A. Zappala Jr. — gunshots still echo.

Young entrepreneurs and artists have been lured by Braddock Redux’s vision: employ art and green initiatives, and recycle empty buildings. A prime example, in size and location, is the Ohringer Building on Braddock Avenue. When Braddock Redux offered free studio space in the 80-year-old structure, 30 artists showed up; foundations then gave grants for a redesign. Now, Braddock Redux owns and pays taxes on the property (though problems with a Duquesne Light transformer have kept upper floors dark). Down the block, a building still emblazoned with the flaking name Unsmoke provides seasonal workspace for other creative types. And the former St. Michael’s convent acts as a hostel for temporary visitors curious to connect with those creative pioneers.

As he sits next door to the community center in his loft lined with black-and-white photos of Braddock, Fetterman admits that maintaining equilibrium between what long-term residents need and new ones want is tricky. 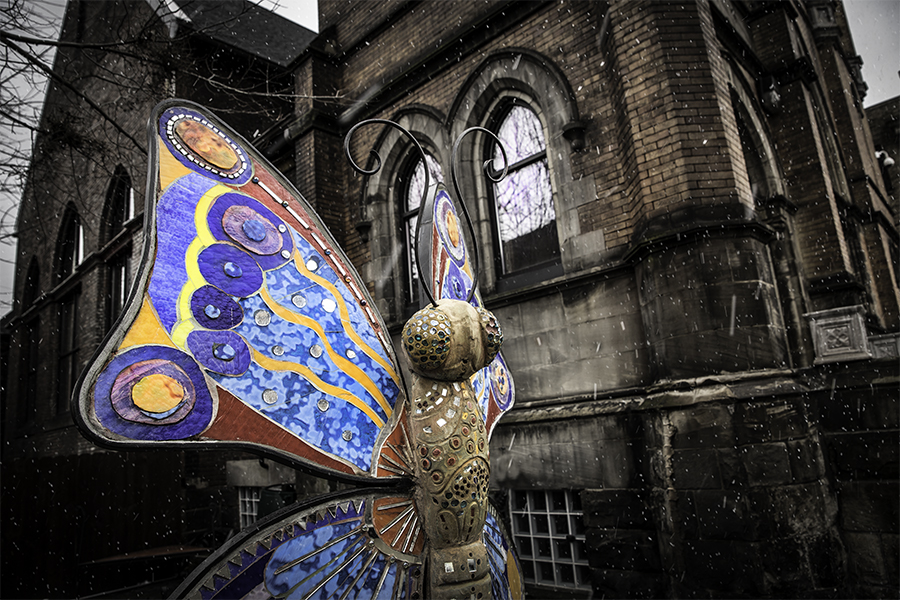 Newcomers pitch in to renew community assets. Braddock’s Carnegie Library, built in 1888, is a grand Victorian pile that embodies the town’s steelmaking era; rescued from demolition in the 1970s, it is more than a national historic landmark — it’s the beating heart of the town.

The library’s residency program gives homegrown artists space and stipends to pursue their work, and affords locals the opportunity to learn from them. Deavron Dailey, 34, currently holds the post. “I get energy, inspiration and resources,” he says of the library, “and giving back to kids and adults in the community is an uplifting feeling.”

In 2007, the town partnered with Grow Pittsburgh to convert newly razed lots to an urban farm. Interns from the Braddock Youth Project work there during the summer to produce organic fruits and vegetables. However, the community center, in the former First Presbyterian Church across from the library, makes a statement about Braddock’s brand of renovation.

Fetterman long dreamed of having a community center and eyed the church as a logical spot. But it wasn’t until late 2009, as controversy mounted about the closure of UPMC Braddock, that Fetterman received a call from Levi Strauss. After reading some Fetterman interviews, the jeans company wanted to highlight Braddock in an independent documentary and a national ad campaign, and offered $1 million to renovate the church and provide services. 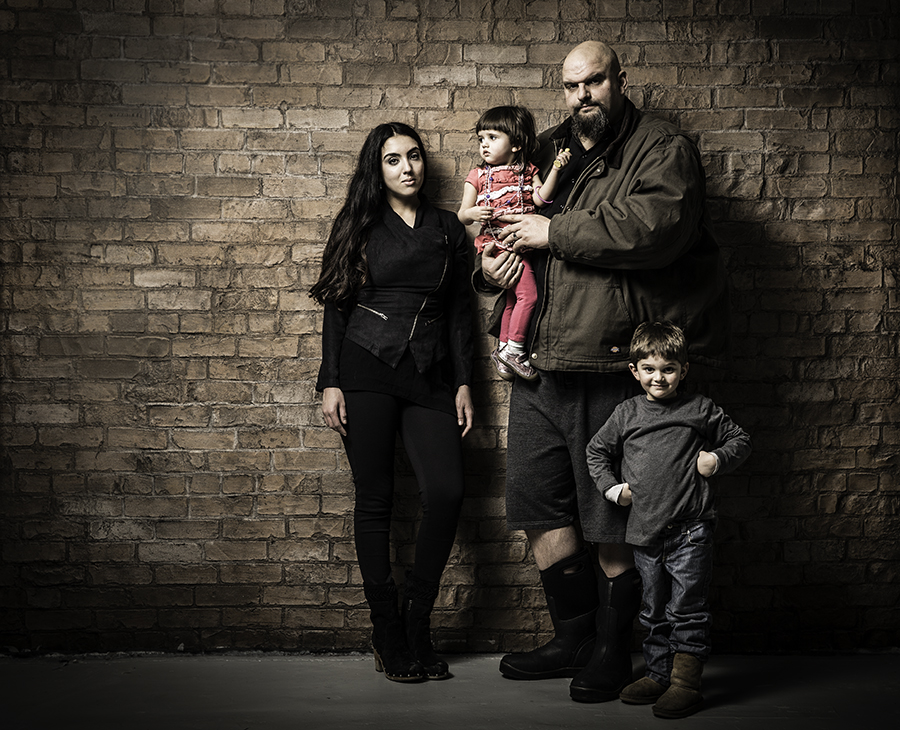 “The fiscal argument was compelling. We’ll save money,” says Johnson. “But this is a great opportunity. Braddock’s future is our future, too.” MedExpress will take space at street level. And a complex of 24 new homes, called The Overlook, completes the redevelopment of the site.

For the record, an old building (not a new one) swayed chef Sousa to open his next restaurant in Braddock. The 1929 Cuda Building will house Magarac (Croatian for “donkey”), which cleverly honors Bunyan-like steelworker champ Joe Magarac.

“It’s a beautiful old box,” says Sousa affectionately of the space. “It’s a great location as a spark for the business district. It’s right near the community center, it’s got a beautiful parking lot and there’s a farm 15 feet away [where we’ll] grow our own produce. It’s a great, great opportunity.”

The McKees Rocks native, 38, says he’s “interested in neighborhoods that have previously not been given credit for diversity and viable business options.” He’s referring to two of his other popular East End spots — Salt (in Garfield) and Union Pig & Chicken in East Liberty. With Magarac, he’s offering something for the whole community, as are the upstart beer aficionados known as the Brew Gentlemen (who will be down the street in the old Harco Electric building).

The space for Magarac, owned by nonprofit Heritage Community Initiatives, will give Sousa enough room for the restaurant, plus a basement cocktail lounge, a casual barbecue eatery modeled on Union Pig & Chicken, and a commercial kitchen that will run a Meals on Wheels program and train the unemployed.

“We’ve been talking to Kevin for a few years,” says Jen Flanagan of Springboard Kitchens, a nonprofit that provides food supplies for the disadvantaged and prepares those with employment barriers for jobs in the food industry. “The opportunity to be exposed to a chef like Kevin is an incredible opportunity for our clients.” Sousa expects to open Magarac near the end of this year, and hopes to move his family from Polish Hill to the Ohringer Building soon after.

City council president Doose, who’s raised three children in Braddock, says the momentum is building. “You know the phrase, ‘it takes a village’? I say, ‘It takes many committed leaders to rebuild a village.’ We are in the process of rebuilding the village of Braddock.”

This article appears in the April 2013 issue of Pittsburgh Magazine.
Categories: Community Feature, From the Magazine