Boxed in for Homelessness

KDKA-AM reporter James Garrity seeks to raise awareness of the homeless population through 100.7 Star and The Salvation Army’s “Man in a Box” campaign. 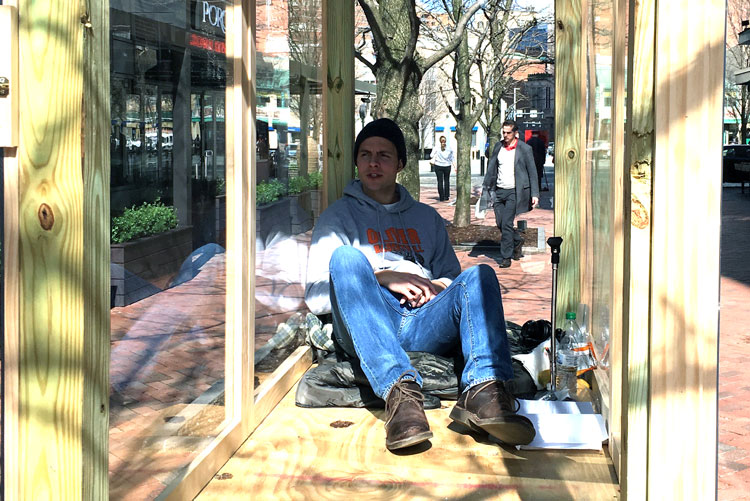 From 6 a.m. Wednesday to 6 p.m. Thursday, KDKA-AM reporter James Garrity will be living in a plexiglas box at Highwoods Properties’ PPG Place Downtown as part of the “Man in a Box” campaign.

This campaign began three years ago when Pittsburgh radio station 100.7 Star partnered with The Salvation Army, Highwoods Properties, Highmark and other sponsors to raise awareness of homelessness in the city.

During the day, Garrity will have minimal shelter and heat and eat the same food The Salvation Army typically provides to the homeless. At night, he will stay at The Salvation Army’s Adult Rehabilitation Center (ARC) in the South Side.

Garrity, who has volunteered with the homeless before, hopes to put an end to the misconception that homelessness is a choice and only affects certain people.

“When you look at the issue and the scope of homelessness, there is the misconception that this is a choice,” Garrity tells Pittsburgh Magazine. “That’s not true when it comes down to it. Often times, it hits people who are a paycheck away from living in the streets. Anybody could be homeless.”

Because of such an overwhelming response to the campaign, this year the event will be featured on 100.7 Star, KDKA AM 1020, 93.7 FM The Fan and the country music station Y108. Garrity will have a microphone to talk to all of the stations about his experience and will also be able to speak to passers-by while in the box.